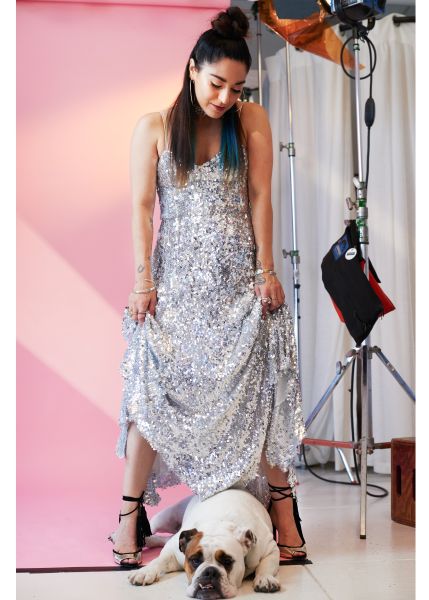 For one of the buzziest moments of fashion week, Maria Grazia Chiuri made a loud and proud feminist statement on the Dior runway. As the show comprised not only her debut at the brand, but the debut of the label’s first female creative director, it was an important moment. To celebrate it, she created a slogan tee that read “We should all be feminists.” Though Katharine Polk has been heading up her own Houghton brand since 2012, on Thursday night she had a Dior moment of her own during Bridal Market Week in New York.

With Polk’s dog (and brand mascot) Jonesy meandering through the venue, Polk debuted a 15 minute documentary, in lieu of a traditional runway show. Featuring nine women, including Polk herself, the film touched on the women’s experiences with body image, depression, social media and dealing with society’s harsh expectations. By relegating the clothes to just clothing, the work sidestepped frequent mistakes of the fashion film genre, like becoming too conceptual or overly ephemeral. 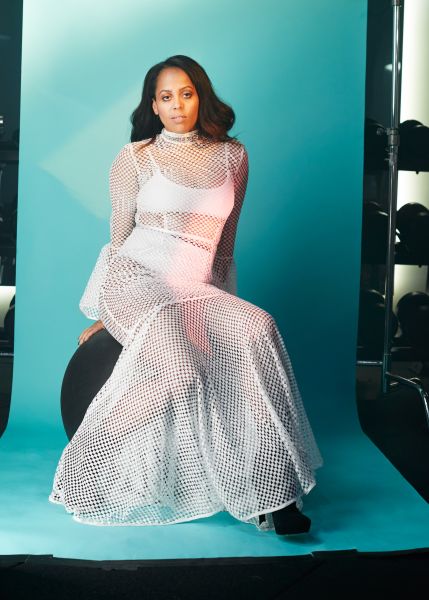 “I really wanted to do something meaningful, and the film was the best medium to show it in,” Polk told the Observer at the screening, which also served as the debut of Houghton’s latest range.”I came out with this Harper’s piece about two months ago and that’s when it all started; it was a very fast process,” said Polk. The tell-all revealed her recent struggle with anorexia, but through her recovery process she wanted to explore body image even further. The film included fellow designers like Lisa Salzer of Lulu Frost, model Chloe Nørgaard, Made MILK co-founder Jenné Lombardo, as well as trainers from the popular gym DogPound and others.

“These women are some of my best friends,” Polk said of the women who took part in the film’s intimate, transparent dialogue. “It wasn’t a casting, it wasn’t a question; I made a list and just emailed them. That was it.” The film’s meaningfulness shone through, with subjects even tearing up on screen. Salzer, who worked with Polk on an accessory collaboration a few years ago, said that at one point, she feared she may have been too transparent. 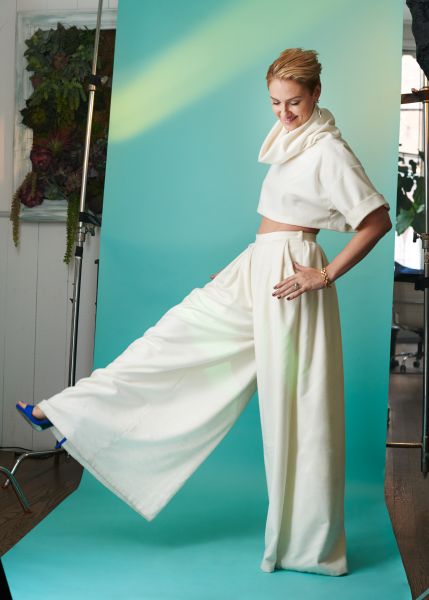 “I wasn’t really expecting to reveal as much as I did but I really respected Katharine’s vulnerability and her honesty,” Salzer said. For her interview component, the accessories designer was interviewed by Polk herself. “Honestly after that night, after reflecting on it, I was thinking I should call her and tell her to not put it in the film. But I slept on it and decided that maybe I could help some people cope with their own anxiety and depression.”

Most of the topics addressed in the film are often addressed elsewhere in the industry. One subject discussed coming to terms with the natural size of her body compared to the skinny frames of models; another discussed loving the effect that motherhood had on her body; still others dug into depression and the prescription medication therein. It was a meaty clip, that though unexpected, is necessary in this day and age, where women are constantly comparing themselves to the airbrushed and filtered lives of their contemporaries on social media. “We’re in a place and time where the perception of your life is more important than your actual life,” said Salzer in the film. 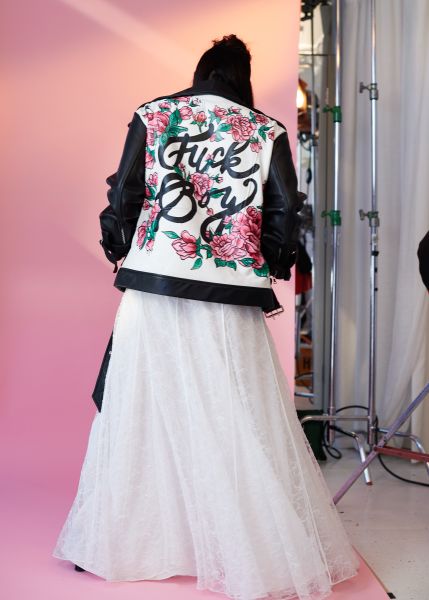 The collection was a collaborative work itself. In addition to the film, each subject selected looks from the Houghton archives and helped to update them, tweaking them for their own bodies. That resulted in a louche cashmere crop top paired with wide legged trousers for one look, as well as a bridal pant suit for another. The collection was rounded out with leather jackets, dresses and a stand out graphic knit that read “Fuck Boy.”

Last season the brand made headlines for their see-now, buy-now component. Polk maintains that as all pieces are made to order, but they are available to order immediately. Sadly, it looks like the collection’s silk bomber emblazoned with “Not Your Baby” on the back has already sold out. 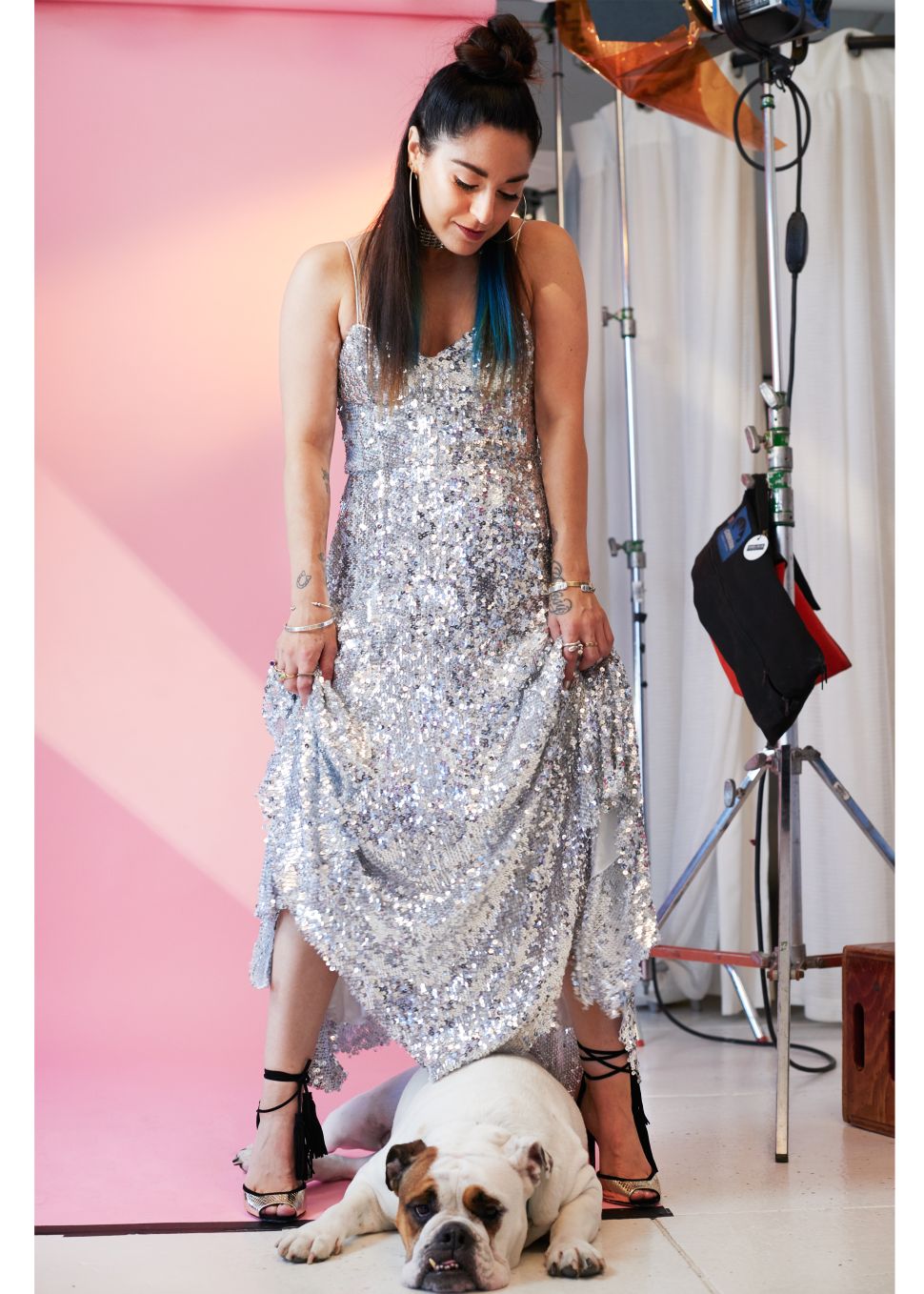