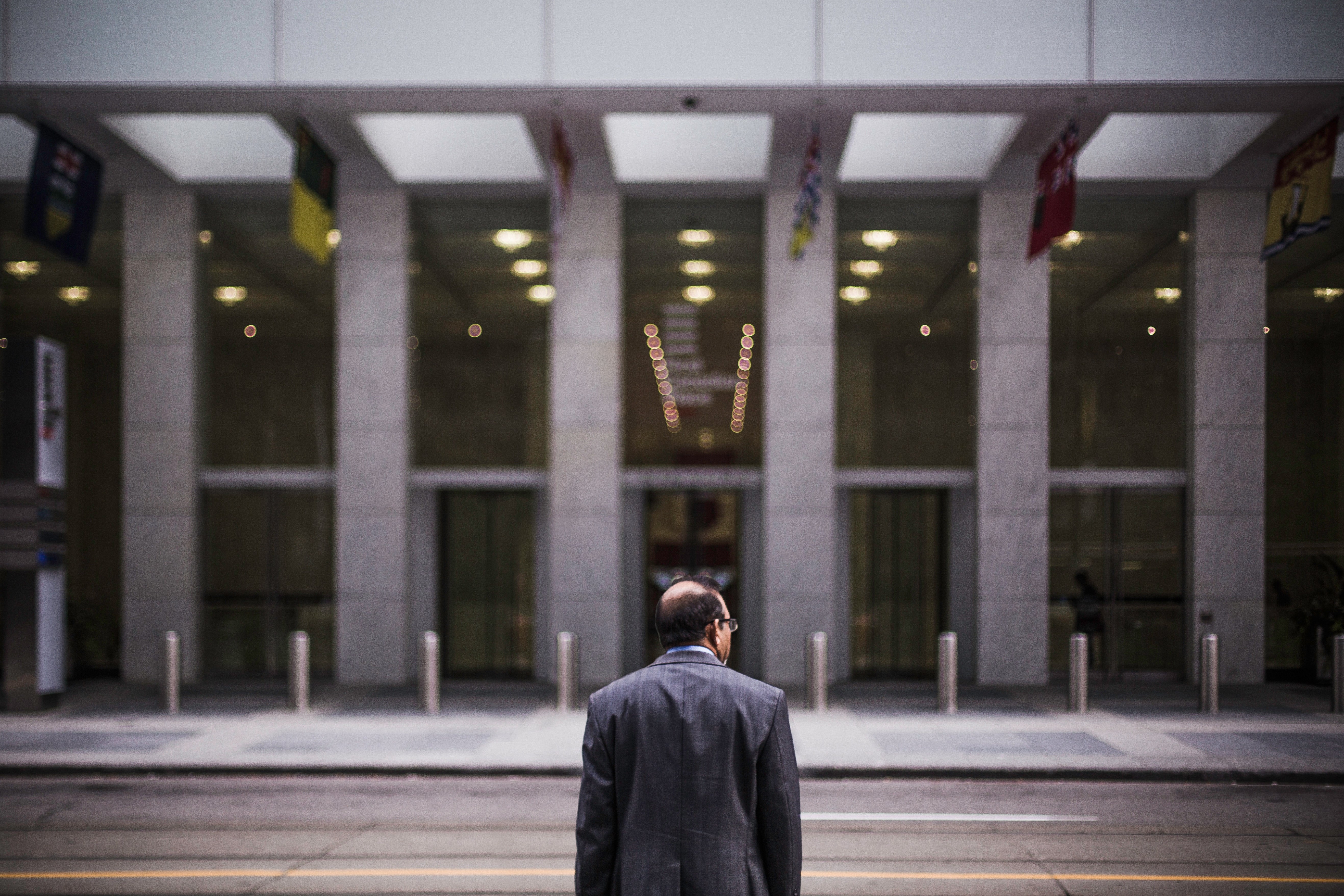 If you want to be a good leader, you’ll have to make that call to step aside one day. Matthew Wiebe/Unsplash

At least, that’s what you will do if you want to succeed.

(For the love of all that’s holy don’t hire people dumber than you just so you can feel smart. Self-awareness is key!)

That’s a great power and one of the reasons people want to start companies in the first place: to be your own boss. It’s also a power that’s easy to abuse. And one that can ruin your company.

It also means you’re responsible for the hardest choice you’ll ever make: when to give your job away.

Inevitably, it’ll be in the company’s best interest for you to step aside and let someone else take your place.

It will be scary. You’ll face insecurities and fear of loss. But if you want to be a good leader, you’ll have to make that call to step aside one day.

And if you don’t, or you wait too long, or you cling to the idea that no one can replace you, well, you’re headed for disaster.

How you know it’s time to step aside

There’s an easy answer here. It’s time to GTFOOTW when you can look someone squarely in the eye and tell them in all honesty, “I think you’ll do a better job at this than I can.”

It’s not because you suck. Obviously you don’t suck if you got to this point in a startup. No, it’s because as a founder you’ll have so many things outside your core role to deal with that your attention will be split. You won’t be able to focus. You can’t do everything well. You will drop balls like a one-armed juggler.

Take me, for example. I led the Product Team at Crew for 4 years—only 2 of which we had an actual team beyond us co-founders. But a few months ago, I decided it was time to get out of the way. It had become clear to me that two members of the team, Dave and Andrew, were ready for the responsibility.

As we continued to grow as a company I’d often let things slip because I was pulled into a two-day meeting about who-knows-what. Or because I was too  exhausted from the long hours.

You’ll know this feeling if you’re a startup founder. The feeling of letting everyone down because your schedule got away from you. The feeling when someone has to send you 3 Slack messages, 2 Trello mentions, and an email just to get your approval for a simple change. (On the 12th day of startup, my founder tagged to me – fiiiive trel-lo caaaards.)

All that to say: How do you know when it’s time? It’s time when you feel you need to be replaced and there’s a clear answer to who can replace you.

It starts with planning well before that moment, however.

As a founder, you are responsible for choosing and training your replacements. You have to make it easy for them to gain the skills and knowledge to do your job. How you do that is up to you, but it starts with understanding what it is you actually do. I, for example, created this Trello board of…my job: 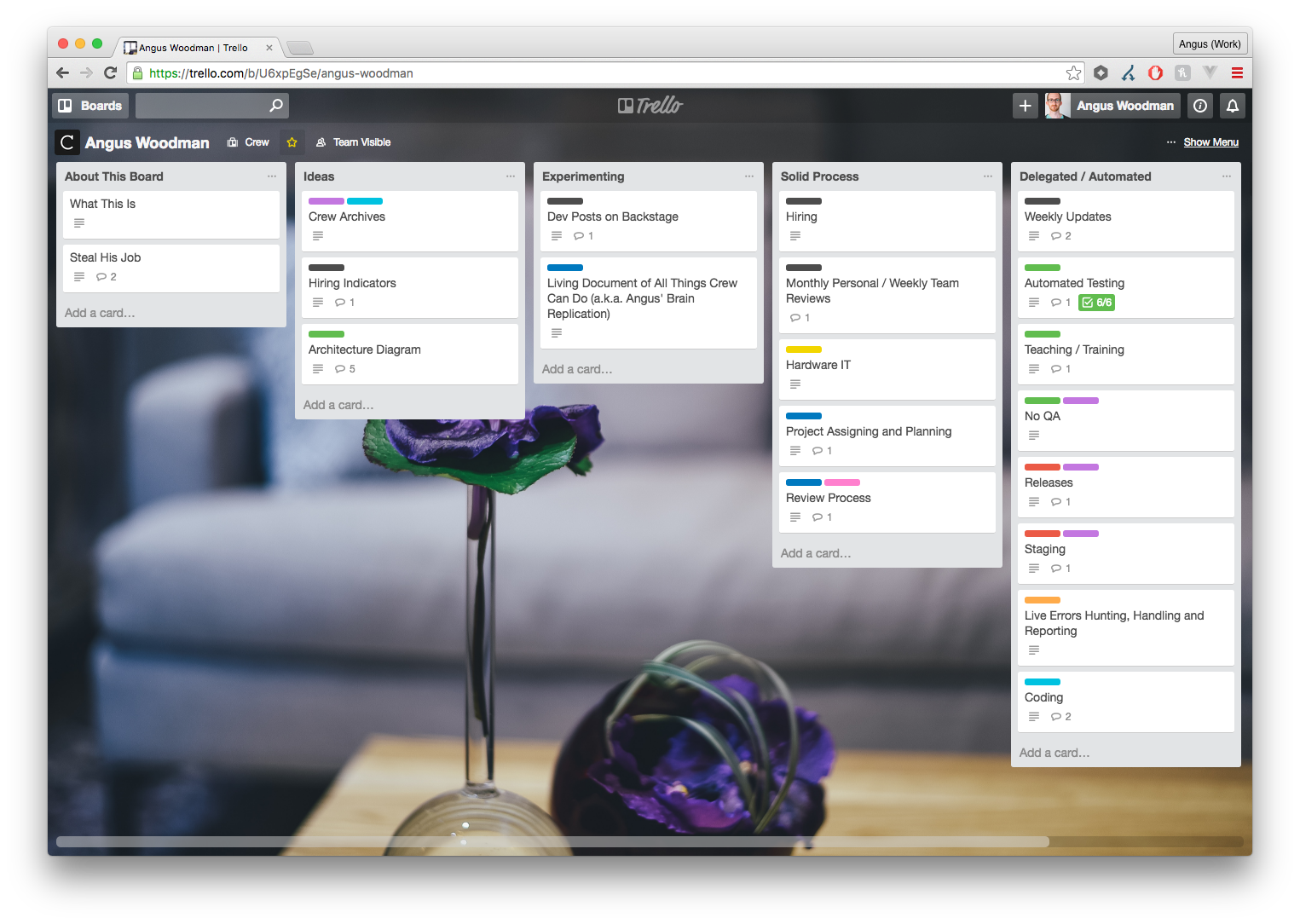 I created this Trello board of my job Crew.co

You can see each card is tagged with different colors. Those correspond to different types of roles within a development team. So, blue is tech stuff and green is leadership stuff.

My goal with this board was to use it Kanban-style to get all of my responsibilities to automated or delegated. I also use it to keep track of experimental processes and to generally not forgot what I’m actually responsible for and what projects I have to spearhead in the future.

If you look in the first column, you’ll also see a card called “Steal His Job”. 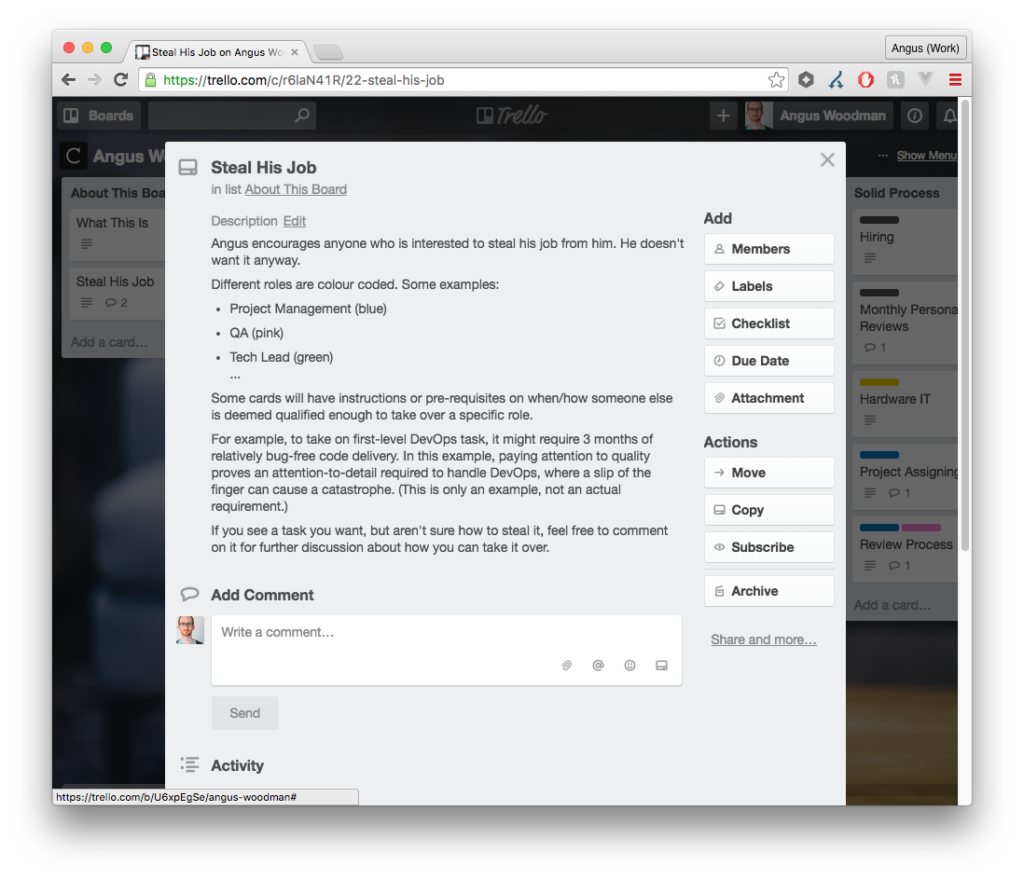 Anyone at Crew could access this board and read the various cards and contact me if they wanted to take over a task. In reality, though, they weren’t going to do that. They were far too busy.

Instead, I asked them. I watched what they did. I kept an eye out of aptitude in different areas. Then, during our monthly 1-1s, I would propose different areas for them to expand into. Which, if successful, would shrink my list and move more of my cards to the delegated column.

I would also give them test projects. Say you notice someone manages themselves very well. Maybe ask them if they want to manage projects, and if so, give them a small projects to manage.

In the case of Dave and Andrew, Dave led the onboarding of new teammates. And Andrew took over the management halfway through a major release. Very different things, but both went well and were indicative of people who can lead.

Get ready to cringe.

You know all those bad habits and poor choices you made along the way that you’re embarrassed about? Well, get ready to see them in other people as those you’ve trained use your behaviour as an example. You’ll see your behaviour from a brand new outside angle.

Fortunately, if you’ve worked on yourself at all, you can guide them out of these habits during the transition phase. “I really try not to do that anymore,” will be your new favourite phrase.

As you help the transition, you may still be in meetings but try not to be too close to the action. The temptation to jump in and control things will be overwhelming. You will have way more information than anyone else at the table—if only because you’ve been doing this longer—but you have to let the new people make their own mistakes and create something of their own.

“I always used to do it this way…” can rob your company of some of the most creative ideas it could ever have.

That said, don’t be afraid to be harsh. You’re setting up a new system and this is the time when bad habits can sneak in and cement themselves. It’s easier to be tough during the transition than correct mistakes down the line.

Be ready for the outcome

Be prepared because, firstly, the whole thing may blow up in your face. Morale may sink, the product may suffer and everything might go to shit. Be ready.

You’ll inevitably hit the delegation barrier at some point and your muscle memory will kick in telling you to go back to your old micromanagement ways. That only you can lead the company in the way it needs to be.

If you’ve hired and trained the right people, once they’ve gotten through a few hiccups, they should do a better job than you ever could. You should go, “woah, I never would have thought of that,” again and again.

Well, there are two reasons.

The first is that you could be hit by a bus and you better have set your company up to carry on without you.

The second is that you’ll be surprised at what fills your time when you empty your calendar.

Seriously. Without the day-to-day taking up all your brain-space, you’ll have time to dig in and investigate what’s really going on across the company. You’ll find new holes where no one is doing things that really need to be done. You can take a step back and get some perspective on the whole.

Or you can go play golf.

Either way, your team will be glad you got out of the way. And you will know if they need you back.

Angus Woodman is the CTO and co-founder of @crewlabs, where this post originally appeared. 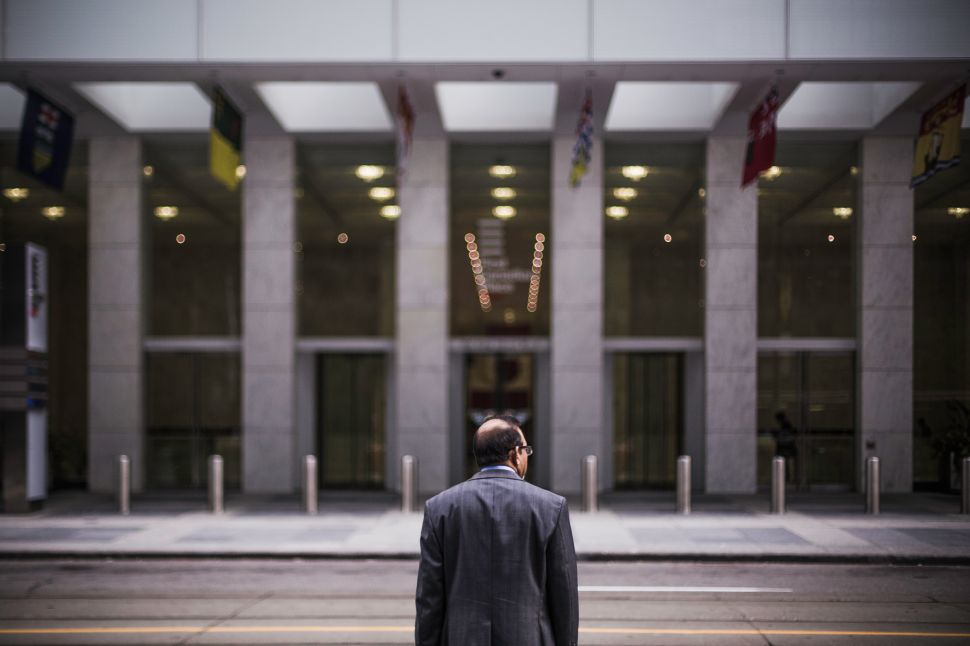