Halloween music has little mileage when played during the rest of the year.

Sure, “Monster Mash” will always be a classic, to be covered on millions of themed CDs in the “for sale” bin at party-stores. The music of Rob Zombie and White Zombie might conjure up some scares, too, for teens at the mall, but I’m far more spooked thinking about what became of the kids who liked that music than I am of that music itself. And the soundtrack to Tim Burton’s Nightmare Before Christmas, which was released when I was at the tender age of 6, will always retain a certain level of seasonally gothic, stop-motion nostalgia. No Halloween music truly keeps me up at night, though John Carpenter‘s Halloween theme comes close.

Horror is different from terror because it’s realized, it’s shown, not so much psychologically manipulative as it is right there, in your face. And to my mind, no album is more horrible than Warren Zevon’s 1978 masterwork, Excitable Boy. I’m using horrible in the classic sense of the word.

Zevon’s breakthrough album, Excitable Boy was bolstered by his hit single “Werewolves of London” that, despite its title, was one of the tamer tracks on the album. But consider Jackson Browne producing and playing on the record, John McVie and Mick Fleetwood appearing on “Werewolves” in peak post-Tusk cocaine delirium, and Linda Ronstadt singing back-up on the title track; this is a man who the creative community had tremendous respect for.

With Excitable Boy‘s release, it was finally the general public’s timr to learn about Zevon—and he wasn’t toning down his pitch-black sense of humor and macabre subject matter for them one bit.

The album opens optimistically with “Johnny Strikes Up the Band”, as Zevon claims, “Freddy get ready, Rock Steady, when Johnny strikes up the band.” Some have surmised that because he later calls this Johnny his “main man…who puts your mind at ease” Zevon’s talking about a drug dealer, but Zevon was likely referring to Johnny Carson and his longtime producer, Fred de Cordova. It’s a deceptively upbeat tune for the record, but by framing the album around the entertaining claptrap of a late-night show, Zevon’s artfully setting up the truly horrific stuff to function as a comment on the American experience.

That realization comes almost immediately with the next tune, “Roland, The Headless Thompson Gunner”. Zevon wrote this one with a bartender and ex-mercenary David Lindell. Zevon sings about Roland, a Norwegian machine-gunner who travels with mercenaries in Africa. “They fought the Congo War with their fingers on their triggers, knee-deep in gore,” sings Zevon, alluding to the mass African genocide that attracted many a foreign investor.

Roland’s skill with the Thompson gun gets noticed by the CIA, which persuades his friend Van Owen to blow his head off. Then Roland’s tale turns into a ghost story as he seeks revenge on Van Owen, who he finds in Mombassa—”Roland aimed his Thompson gun—he didn’t say a word. But he blew Van Owen’s body from there to Johannesburg.” The Thompson Gunner still wanders through the night after that, haunting the world and symbolizing not only the ugliness of genocide, but the ugliness of wars founded by other countries. By the end of this ghost story, the CIA has blood on its hands.

Heavy shit for a ’70s rock ‘n roll album, eh? We think Zevon’s giving it a rest on the next tune, the title track “Excitable Boy”, as his upbeat, rollicking piano and Linda Ronstadt’s back-up vocals suggest. A young man goes to dinner in his Sunday best? How charming. Only when he’s there, the man “rubs a pot roast all over his chest.” “Excitable boy, they all said,”  Zevon sings in the refrain, echoing his long-held nickname amongst bandmates.

Then our excitable boy goes to a 4 a.m. show at The Clark, which based on the time I’m assuming is a porno theater. He bites an usherette’s leg there, and again, folks just think he’s excitable. Then he takes Little Suzie to the Junior Prom, where “he raped her and killed her and took her home,” and is still only thought of as an “excitable boy.” With that horrific turn, the song transforms from being about some oddball weirdo into an fable about of our inability to diagnose mental health problems in this country, and our willingness to just brush them off when they don’t conform to an American ideal.

The next tune, “Werewolves of London”, would go on to become a novelty, a camp classic that Zevon called “a dumb song for smart people.” And why not? He opens the tune with an image of the great horror actor Lon Chaney walking with the Queen around London, and the song follows a similar level of goofiness as it describes some hairy creatures, eating Chinese food and mutilating little old ladies. Subject matter aside, the song sounds even lighter when heard in succession. After the heaviness of the two songs prior, Zevon’s giving us a breather.

Some of the camp likely stems from the fact that he originally wrote “Werewolves” for the Everly Brothers when they wanted a dance song. While thematically linked to the prior two tracks, this one’s just funnier, almost desensitizing you to Zevon’s casual insertion of gore—“You better stay away from him, he’ll rip your lungs out, Jim. Heh, I’d like to meet his tailor.” The original version opens with a famous quote from Shakespeare’s Hamlet, where Prince Hamlet meditates on mortality while holding the skull of his late jester—”Alas, poor Yorrick, I knew him well.” Excitable Boy explores similar thematic territory, reminding listeners that even jokers must eventually confront death.

The next few songs aren’t horrible, per se, but still subversive and classic nonetheless.

“Accidentally Like a Martyr” compares being dumped to being crucified, but is communicated with such elegance and poise that it still retains a tear-inducing potency. The last lines in its chorus find Zevon in fine form, commenting on the pain of romance, which can be both as beautiful and as blindly naive as religious devotion—”We made mad love, shadow love, random love and abandoned love, accidentally like a martyr. The hurt gets worse and the heart gets harder.”

Zevon’s still connecting historical imagery to his warped take on the American experience, only now he’s using it to comment on the nature of devotion.

“Nighttime In The Switching Yard” comes next, seemingly the most incidental track on the record, as it’s sandwiched between two tearjerkers. There seems to be some meaning in Zevon’s line that “The midnight train goes both ways,” seemingly subverting the image of Gladys Knight & The Pips taking a one-way “Midnight Train to Georgia” with a comforting reality that the trains do, in fact, make return trips.

Zevon then returns to the heavy-handed haunted, historically-based tragedy on the gorgeous “Veracruz”, conjuring a similar sense of historical violence with the opening lines: “I heard Woodrow Wilson’s guns, I heard Maria crying. Late last night I heard the news, that Veracruz was dying.” The United States occupation of Veracruz is largely remembered in Mexico as one of the ugliest moments of betrayal in the Mexican Revolution, when diplomatic relations between the two countries broke down and Americans occupied the central Mexican port, cutting off Mexican President Victoriano Huerta’s ammunitions that his troops needed to fight.

Zevon’s long had love for Mexican culture, even if it sometimes came off as fetishistic, like on the L.A. barrio love song, “Carmelita”. Here he’s stepping full on into the empathy of history’s pain, though, and imagining what it was like for the families back then—”Aquel dia yo jure hacia el puerto volvere. Aunque el destino cambio mi vida, en Veracruz morire.” Roughly translated, Zevon’s saying, “On that day I swore, to the port I will return, even though destiny changed my life, in Veracruz I will die.”

By this point in the record, aren’t the ghosts of history infinitely scarier than the werewolf, and even the sociopathic “Excitable Boy”?

How does our societal reaction toward that which makes us uncomfortable, even in a micro scene like at a dinner table, affect our macro behavior as it plays out abroad, in foreign conflicts and unspeakable carnage? Zevon’s not only asking all these questions—he’s doing it with a knowing smirk.

The way our country acts toward the world often has cosmically horrible consequences.

Let’s just call the album’s penultimate “Tenderness on the Block” a love song about a father learning to trust that his daughter will make good decisions. Though not a father myself, I imagine that moment when your little girl grows up and goes out on her own can be equally as frightening as the aforementioned scenes, if not more so, but Zevon and Browne put it all in perspective.

The final track, “Lawyers, Guns, and Money” brings Zevon’s historical references, the gore and the distrust for America’s foreign affairs all back home to roost. A man is gambling in Havana when he gets into trouble, and must ask his father for help. He’s hiding in Honduras, scared shitless and asking dad to send the lawyers, guns and money. The reason that all the shit hit the fan is explained at the outset when Zevon sings, “I went home with a waitress, the way I always do. How was I to know she was with the Russians, too?”

Released in 1978 during a strong level of frostiness from the Cold War, Zevon’s conjured paranoia really hit home time.

He’d just spent a chunk of the record describing the horror of America’s foreign policy disasters, and now the consequences are personally affecting him. Lawyers, guns and money are all images with negative connotations, but while his character hides out and prays for his life, they become the objects of liberation. And when those three things become tantamount to a new trinity of salvation, in the album’s closing moments, we realize that the way our country acts toward the world often has cosmically horrible consequences, and leaves blood on our hands. And that truth might be the scariest thing of all. 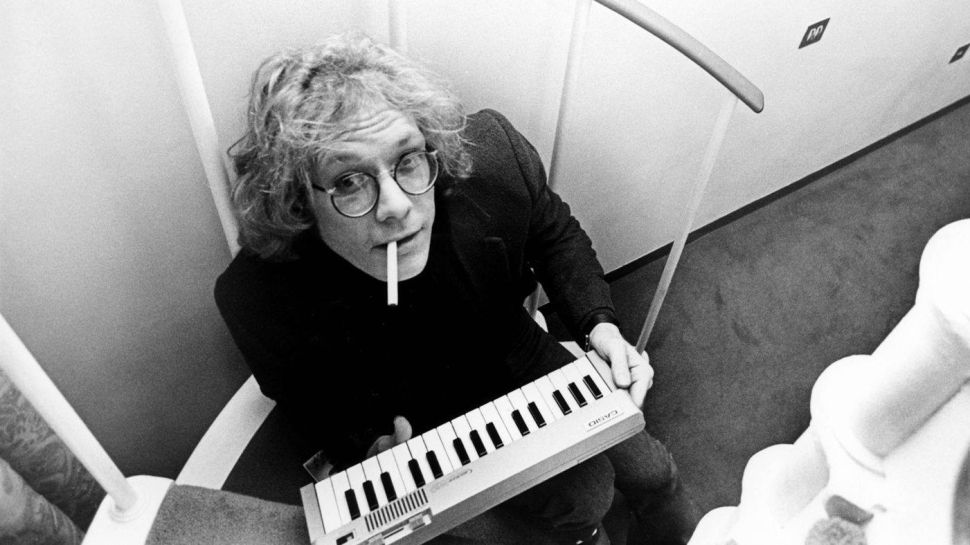