Entering into the Nike+ Clubhouse in Soho, I’m welcomed by a sweatsuit-clad man sporting white gloves, and it’s with good reason. He, along with the rest of the large staff on hand, are tasked with handling the awesomely rare Nike Mag shoe. “It came out in 1989, and it was an iconic moment that everyone remembers,” a Nike spokeswoman recalled of the original sneaker which debuted on Michael J. Fox as Marty McFly in Back to The Future. “It was inspired by what the future of footwear would like look, or act like, so then people petitioned about wanting to see this shoe come to life.”

In 2011, the first 1,500 iterations of the sneaker were auctioned off to raise nearly $10 million in just 10 days for the Michael J. Fox Foundation. However, the shoes did not include one signature feature: The auto-lacing technology. While the first pair was given to Mr. Fox himself, as we reported on last October 2015, a small portion of the public will now have their chance to score a pair. Until October 11, shoppers can make a $10 donation to the Michael J. Fox Foundation to be entered into a raffle via Nike.com/Mag or the Nike+ App to win just one of 89 available pairs. Nike+ members also have the chance to try on the real thing until Friday, October 7th at 5 PM at the Nike+ Clubhouse at 45 Grant Street.

Trying on the shoe is indeed futuristic, and unlike any other. After slipping it on, it simply requires that you stand up and apply pressure on its footbed. That’s it. From there, the shoe automatically adapts to tighten around your foot. A green and red button can further adjust the sizing, and another yellow button is there to adjust a set of lights on the heel. “I think Tinker Hatfield’s initial vision for the future of footwear, when he was drawing it for Back to The Future in about 1986, he thought shoes would have lights on them,” the rep explained of the Nike designer also responsible for the Air Jordan. “They show the battery life too. You do have the charge them, but you just plug them right into the wall, and they fully charge in about 3 hours.”

The auto-lacing isn’t limited to the Nike Mag though. If you’re not one of the lucky 89 to get your hands on pair, the technology will be integrated into several other styles from the powerhouse athletic wear brand, including the less flashy, perhaps more practical HyperAdapt 1.0 due out November 28th – just in time for the holiday season.

McFly!! 💾 Thank you @Nike for allowing me to try on the all-new, self-lacing #NikeMAG 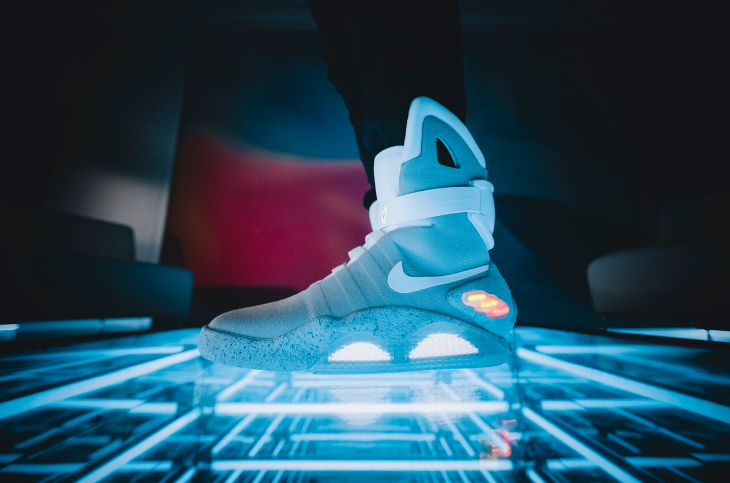