Watching Fox News Channel for two decades makes you cynical, so suspicious that you wonder if this week’s war of words between Megyn Kelly and Sean Hannity was the real deal or just a phony feud to goose the already high ratings of America’s right-wing propaganda network.

The two of them even posed for a picture together, which appeared on the website Mediaite.

At 10 p.m., when Kelly ended her live show and Hannity began his, Kelly—with a mischievous smile—said: “Up next, live! Sean Hannity. My friend!”

Their spat concerned Kelly’s comments Wednesday about Hannity’s obsequious groveling for Donald Trump, the Republican presidential candidate (although she didn’t use quite those words).

Hannity reacted by accusing Kelly of supporting the Democrat, Hillary Clinton, a sin that once could get a Fox anchor excommunicated.

Sincere or not, this week’s Fox subplot to the campaign put into plain view two destructive forces in this election: The fracturing of Fox as a network with a unified point of view and the unraveling of the GOP as a rational, national political party.

But don’t ask Fox’s other prime-time host—Bill O’Reilly—who is still playing dumb, at least for the time being.

“All that stuff that kind of swirls around is interesting outside Fox News,” O’Reilly told Judy Kurtz of The Hill. “But, inside, I don’t know what’s going on. I got to tell you, I read stuff and I go, ‘Oh, yeah. I don’t know.’”

Besides, O’Reilly has other worries. Also on Thursday, demonstrators outside the Fox hole on Sixth Avenue protested a segment of The O’Reilly Factor this week in which O’Reilly flunky Jesse Watters went to Chinatown and insulted Chinese and other Asian people with simplistic stereotypes and ignorant questions.

“Passing off this blatantly racist television segment as ‘gentle fun’ not only validates racist stereotypes, it encourages them,” Councilman Peter Koo said in a statement, according to The New York Times. “The entire segment smacks of willful ignorance.”

Such messes did not pop up at Fox as much back when Roger Ailes was emperor. But things have deteriorated since last summer when Ailes was forced to resign after lawsuits and other allegations of sexual harassment from female employees.

Back then, Hannity defended Ailes; Kelly didn’t, and she spoke to lawyers who investigated the Fox sex scandal.

This and other events make even more ironic the current confluence of Kelly and Trump, a good buddy of Ailes and Hannity.

After Trump lost his first debate to Clinton almost two weeks ago, Trump rushed to his Hannity sanctuary in the spin room for a cream-puff interview.

Should Clinton become the nation’s first female chief executive, some of the credit must go to Kelly, the most-watched and most influential female anchor in cable news.

During the first debate of the Republican primary season in 2015, Kelly asked Trump a question that defined him as a sexist cad, a theme that recurs every few weeks as he lags in the polls, particularly among women voters.

“Only Rosie O’Donnell,” Trump interjected, trying to be funny.

“No, it wasn’t,” Kelly replied. “Your Twitter account has several disparaging comments about women’s looks. You once told a contestant on ‘Celebrity Apprentice’ it would be a pretty picture to see her on her knees. Does that sound to you like the temperament of a man we should elect as president?”

It was a rhetorical question, the kind an accused person on a witness stand might hear from a hostile lawyer. After deflecting the question with vapid comments about political correctness, Trump attacked Kelly, after the debate, with a sexist insult.

Since then, Trump has insulted many women for many things, including last week’s exchange with Alicia Machado, a Venezuelan Miss Universe of 1996 who said Trump insulted her for gaining weight.

Back then, Trump owned that pageant. In a Twitter tirade late last week, Trump told people to watch Machado in a pornographic film that does not exist.

After Trump lost his first debate to Clinton almost two weeks ago, Trump rushed to his Hannity sanctuary in the spin room for a cream-puff interview. Kelly wondered aloud then whether Trump would talk to real journalists after finishing with Hannity.

And on Wednesday night, she noted that Trump is afraid to be interviewed by authentic fair-and-balanced reporters who might ask him tough questions about, oh, maybe his misogyny.

“With all due respect to my friend at 10 o’clock,” Kelly said, “he (Trump) will go on Hannity—and pretty much only Hannity—and will not venture out to the unsafe spaces these days, which doesn’t exactly expand the tent for either one of them. There. That’s my two cents.”

“U should be mad at Hillary Clinton,” Hannity told Kelly in one of them. “Clearly, you support her.”

And you may be excused if you think it sounds all too pat, like one of those “unscripted” reality shows that pollute commercial TV in the 21st century. Fox has been doing its alternate reality since 1996, and it’s appropriate to give credit where credit is due.

Think of all Fox, Ailes, Hannity and so many more have brought to TV since the second Bill Clinton term.

Next came all that fake evidence of “weapons of mass destruction,” pushed by Bush, that led to the horrific invasion of Iraq. Speaking of wars, don’t forget War on Christmas—back soon for its 21st season.

And remember all that “birther” nonsense back in 2011 that helped launch Trump as a politician? Oh, and the launching of the Tea Party in 2010? Hannity and Fox were all over that one.

Hannity, in particular, championed Sarah Palin, the 2008 candidate for vice-president who embarrassed the party with her Trumpian lack of sophistication. Even Kelly would roll her eyes when forced to interview her.

So many of these Hannity issues seem to blend so well with Trump’s angry and menacing words.

But, for all their manly fellowship, the Trump/Hannity partnership has been a mixed blessing for “Mistah Trump,” as Hannity calls his hero.

Trump appears to have learned his debate decorum from watching Hannity’s show in the 10 p.m. slot, where it was bumped to make room for The Kelly File in the more attractive 9 p.m. hour.

When Hannity “debates” a lowly liberal or a progressive or a Democrat, Hannity simply interrupts his guests, out-shouts them and belittles their intelligence. He always wins.

But when Trump tried this against Clinton in their first debate, he came off as a bully and a boor and his poll numbers plunged.

Might Trump again try the same approach on Sunday when the second debate—this one a “town hall” forum—is moderated by Anderson Cooper and Martha Raddatz?

It’s hard to know. The disgraced Ailes now works in the shadows for Trump, giving him debate lessons just as he did for Tricky Dick Nixon back in 1968. “Law and order!” Trump says today, warning of the dangers of Mexicans and Muslims.

He hasn’t been bragging so much lately about being endorsed by the National Rifle Association. And the NRA doesn’t mention Trump directly in some of its commercials, like the one that aired Thursday night on Hannity.

But the message is consistent with the views of Trump and the conservative host Jon Stewart calls “Lumpy.”

The ad showed a big guy with a beard wearing a black tee shirt with the American flag. Over faint, disquieting music, he glared into the camera and asked viewers what they would do if terrorists shot everyone in Times Square.

“Weak,” the man said. “Political and media cowards. Americans are slaughtered by hate-filled jihadists. Radical Islam is as evil, violent and threatening . . . as the Nazis were.”

And we’re endangered, the bearded man in the ad said, by “gutless leaders” who make “political attacks on the gun rights of the law-abiding . . . I know the rule of war. The weak get slaughtered and we are at war.”

It was the most riveting part of Hannity’s show, which cut back on its usual political venom only because Hurricane Matthew on the Florida coast forced the host to pretend to be a real reporter and read the news.

Hey, even that storm won’t stop Sunday’s debate, which is expected to get a large audience again. Why not make it bigger with a reality-show doubleheader? On the undercard, Hannity could debate Kelly.

Who cares if it’s all just a bunch of bull? As Anna Merlan put it on the website Jezebel, “The only good thing about this election is watching bad people fight.” 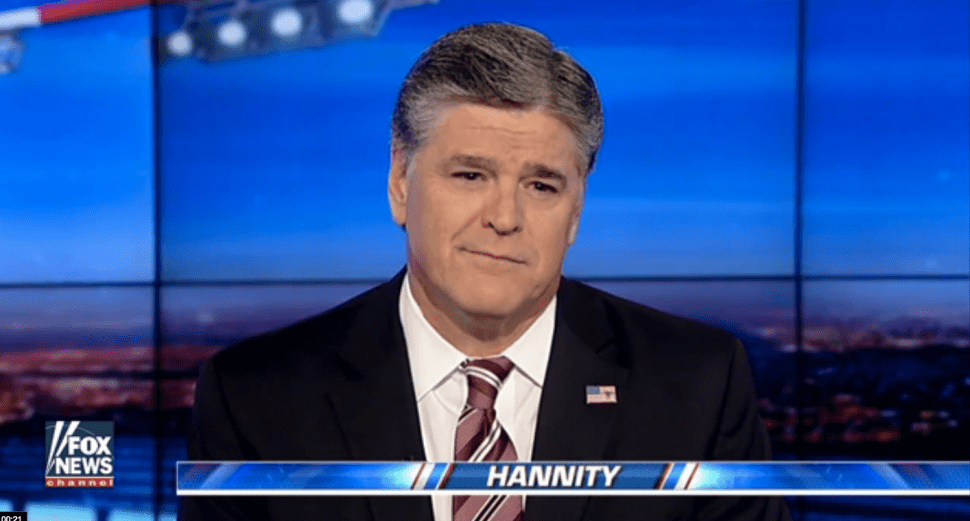