‘Imagined Dialogue For’ is our series by the hilarious and talented Chris Scott, of Reviews of Movies I Haven’t Seen fame. Next up? Chris takes a stab at guessing what happens in Marvel’s Cumberbatch mind-trip, Doctor Strange.

DOCTOR STRANGE (BENEDICT CUMBERBATCH): None of this makes any sense.

THE ANCIENT ONE: Would you like to know a secret, Doctor?

THE ANCIENT ONE: What just took place inside that automatic teller machine… was magic.

THE ANCIENT ONE: Oh dear Doctor, if you only opened your eyes to what’s right in front of you.

DOCTOR STRANGE: Then please. Show me.

THE ANCIENT ONE: What if I were to tell you that inside that ATM there was a team of 4-inch-tall purple and green, portly little magical people retrieving and distributing money.

THE ANCIENT ONE: It’s only impossible because your mind isn’t fully expanded. They’re called Pallopops. They smell of honey. Their eyes are large and glistening, and they never sleep, and they make clicking noises with their tiny juicy tongues like this: click click click click click. They work day in and day out to give money to people. They have so much energy, Doctor Strange.

DOCTOR STRANGE: This changes everything I thought I knew about the world.

THE ANCIENT ONE: They sing a song while they work. Would you like to hear it?

DOCTOR STRANGE: Yes. Very much so.

We are the Pallopops. We guard your money/

We love what we do, and we smell like honey/

And that’s all we think about, for we never sleep.

Look who it is, it’s our newest friend/

They need fifty bucks, and that’s what they’ll get/

For we are the Pallopops and this is what we do/

When you need some money, we always come through.

Oh hello there friend! Are you depositing a check?/

Well you came to the right place, so step right up/

We’ll even take two checks, if one isn’t enough.

DOCTOR STRANGE: Very good. I think I get the pic–

But here’s the deal folks, and don’t you forget it/

Capital is an illusion to keep you complacent/

Currency’s a mirage, a distraction at best/

You’re a hamster in a wheel serving the top one percent’s interests.

DOCTOR STRANGE: If I may, real quick just–

So sure, here’s a few dollars to get you through the day/

At the dignity and decency of your entire species/

The rich are laughing in their castles while you wallow in feces.

DOCTOR STRANGE: Are you done?

THE ANCIENT ONE: Yes. It’s beautiful isn’t it? Let’s do some magic lessons now.

THE ANCIENT ONE: Through this portal you can access any time and space in the universe. But only if — Doctor Strange, are you paying attention?

THE ANCIENT ONE: Ok, we can talk about this for five more minutes and then we really gotta get back to the sorcery stuff. No, I haven’t personally met Hawkeye but I know a few people who have and they all rave about him, so–

DOCTOR STRANGE: God I don’t know what I’d do if I met him. Probably turn into a ball of mush, honestly. He’s just the best.

DOCTOR STRANGE: I mean, like, if we were both at the same party or something I’d definitely say hello and chat him up or whatever. But it’s just not the same as Hawkeye, you know?

THE ANCIENT ONE: I don’t know, actually. To be totally honest with you, I mean, Hawkeye seems really great and he’s a force for good and all that, but of ALL the Avengers, I don’t fully understand why this is the guy you’re all about.

THE ANCIENT ONE: Something I can’t really figure out is what exactly his superpower is. He’s super good with a bow and arrow? Is that mostly it? And I’m not trying to be dismissive here, don’t get me wrong. Seriously It’s a great skillset. I just feel like I’m missing something.

DOCTOR STRANGE: The bow and arrow is a big part of it but he’s just a super talented guy in general, I think. Maybe that’s the appeal? Like it makes him more relatable?

THE ANCIENT ONE: What about Iron Man? Or Black Panther? Black Widow? Hulk? Thor? You know Spider-Man’s a part of this thing now, right? All these guys just seem a lot more exciting to me, no disrespect.

DOCTOR STRANGE: I don’t know what to tell you. They just don’t do it for me like Hawkeye does. Did you know Hawkeye’s real name is Clint?

THE ANCIENT ONE: I did know that. Ok how about this. I’ll reach out to Captain America and see if he can set something up between you and Hawkeye. We really gotta focus on the magic and sorcery stuff.

DOCTOR STRANGE: No no no, I don’t want to feel like I’m imposing. I want it to happen organically. It’s — look, I’m sure it’ll happen at some point. Don’t worry about it. Ok, now how do I travel into other dimensions or whatever. 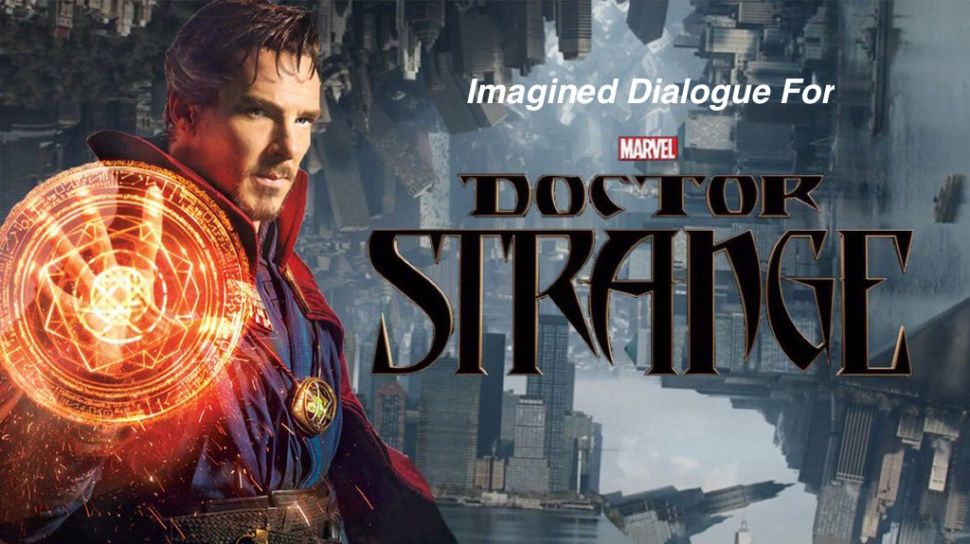