When eight African-Americans and an urban integration advocacy group sued Donald Trump and his father for alleged discrimination in 1982, lawyers representing the family company attempted to tar the plaintiffs with questions about potential ties to “black or militant” groups and having children out of wedlock, according to documents the Observer obtained.

As first reported by Mother Jones, Coronet Hall—a Queens building Trump co-owned with his father—and the Wilshire Building, another Trump-owned and managed property that had already been the subject of a New York City Human Rights Commission discrimination investigation two decades earlier, were defendants in a class action lawsuit spearheaded by the Open Housing Center, an activist nonprofit. The central contention of the suit was that the Trump company had colluded with the Kraham Leasing Corporation to prevent blacks from renting in predominantly white neighborhoods, in violation of the Fair Housing Act of 1968.

The Open Housing Center deployed both black and white “testers” to apply for apartments at Coronet Hall, the Wilshire Building and other nearby developments—and pressed a suit with the African-American group after they reported getting told that apartments advertised as open to white testers were in fact unavailable, or informed they would have to undergo prolonged credit checks or other conditions not imposed on their Caucasian counterparts.

“The individual plaintiffs and the class they represent are now suffering and will continue to suffer irreparable harm and injury by the unlawful policies and discriminatory practices of the defendants,” a copy of the complaint reads.

As the case proceeded, the defendants’ legal teams attempted to undermine the credibility of the testers, and their ability to represent a larger “class” of injured parties. With one African-American tester, Lotus Dix, legal documents the Observer accessed show the Trumps’ attorney Louis Biancone pursued a prolonged line of pointed questioning about her “political associations.”

“Were you ever a member of any black or militant movements?” Biancone pressed during deposition, and continued after Dix answered in the negative. “Do you wish you were?”

Biancone endorsed Kraham attorney Paul Goldberg’s arguments against the standing of the other accusers, stating “defendants Coronet and Trump support and adopt the arguments and authorities submitted on behalf of defendant Kraham Leasing Corp.”

Goldberg dug into the personal past of black tester Ollie Williams, a City College student who had a conviction for second degree assault, multiple children born out of wedlock and who had given three different addresses as his legal residence.

“Although unmarried, he testified that he is the father of several illegitimate children,” Goldberg noted. “Until one week prior to the deposition, he had no permanent address.”

“None of these plaintiffs possesses the personal characteristics or meets the high moral standards required of class representatives,” Goldberg concluded.

Donald Trump himself fathered a child out of wedlock a decade later.

In the end, the Trump buildings and their co-defendants—including Howard Kalikow, whose son Peter has donated almost $450,000 to the Trump Victory Fund—settled for $40,000 and agreed to integrate their apartments.

In a Hillary Clinton campaign call yesterday, Henry Cisneros—who served as secretary of the Department of Housing and Urban Development during the 1990s—referred to Biancone and Goldberg’s inquiries as “illegal questions” to ask of renters. He recalled that the Trump family’s archipelago of middle-class developments scattered across the outer boroughs was the subject of several similar suits and legal settlements, and that those homely brick complexes formed the foundation of the GOP nominee’s later luxury brand.

“In defending themselves,they went after people, suggesting it was something flawed in the potential renters, as ignorant, or dishonest, or in one case, because there were illegitimate children in his background,” he said.  “Unfortunately this is just one more case where Trump, and the organization that he ran, which is the whole basis of his empire, his family fortune.”

Cisneros himself resigned from HUD in disgrace amid a scandal involving an extramarital affair and false statements he made to federal investigators. President Bill Clinton ultimately pardoned him for the latter crime.

The Trump campaign did not respond to requests for comment. 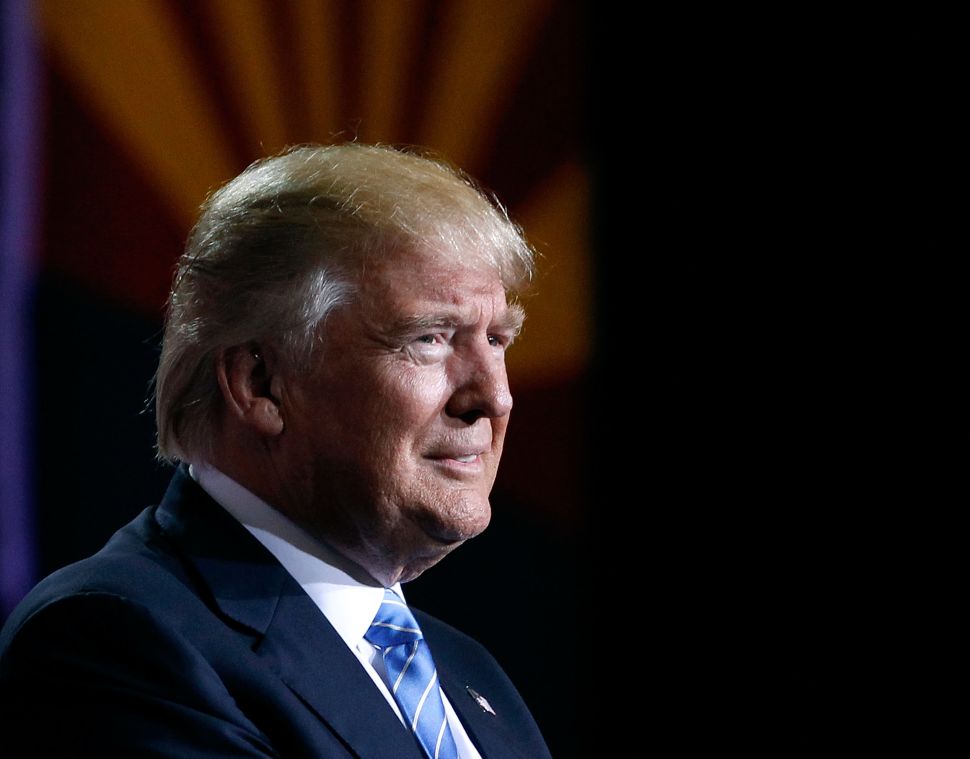