The announcement that the 92nd Street Y had scheduled a wine talk and tasting called “How to Drink Like a Billionaire” on the evening of the third presidential debate may have raised a few eyebrows. After all, talks at the Y typically bear less flashy monikers like “Pinot Power” and “Robotics in Medicine.”

So it was with an air of polite skepticism that the few dozen audience members settled into their folding chairs, where—as if to allay their cynicism—they were quickly handed each a large Bordeaux glass. Then, host (and author of the book of the same title) Mark Oldman entered the room, looking like he’d gotten the last jitney out of the Hamptons, style-wise—cerulean blue pinstriped jacket, white fitted tee and dark jeans. In a flash, he donned a pair of skydiving goggles—because why not?—and set about sabering open a bottle of sparkling mystery drink.

At this point, any audience members prone to giving side-eye were surely feeling the urge. But sharing is caring, and Oldman cheerfully passed the decapitated bottle to the audience while an assistant opened additional bottles and made sure everyone got a hefty portion. “This is prosecco, which I call a B.S.D., a bubbly stunt double,” he said. “It gives you 70 percent of the joy of real champagne for 30 percent of the price.” By the time everyone’s glass had been filled—and refilled—with the seemingly free-flowing prosecco, Oldman had clearly won them over.

A player in the wine world since he founded the Stanford Wine Circle while attending Stanford University, the 47-year-old Oldman is a highly sought-after speaker on the food and wine festival circuit—including 11 consecutive appearances at the Aspen Food & Wine Classic—where his irreverent style is a breath of fresh air in the still largely hidebound wine world. He’s most often described as a wine “personality,” rather than wine “expert”—a title he clearly embraces. (On this night he used a $150 Karim Rashid champagne saber to open a $15 bottle of prosecco.) Oldman says it’s all to help cut the wine world down to size for the average person.

“Wine can be scary, even for me,” Oldman admitted to the Observer. “I don’t look like your typical wine snob, so when I go to restaurants they just think I’m some guy who won’t spend that much on wine.” He credits his ability to relate to the wine novice to being chronically underestimated by waiters and sommeliers.

“I’m mistreated all the time, which makes me incredibly empathetic because I get to see what my friends and family experiences,” he said.

Back at the talk and tasting, Oldman and his team poured heroic-sized servings of the evening’s second wine, Whispering Angel Rosé, which he dubbed the unofficial juice of the Hamptons. When the audience was directed to yell out descriptions of the color, they didn’t get past “pink.” Nodding in encouragement, Oldman suggested a few more poetic phrases: “Pale salmon. Onion skin.” As the audience obediently began to swirl and sniff their wine per his instruction, he offered advice. “Swirl your wine again but this time cover it with your hand,” he said. “Then sniff it again, inhaling deeply.”

‘Wine can be scary, even for me,’ Oldman admitted. ‘I don’t look like your typical wine snob, so when I go to restaurants they just think I’m some guy who won’t spend that much on wine.’

When a woman in the crowd shouted out that carrying on in this manner at a restaurant would make you “look like an idiot,” Oldman grinned in satisfaction. “Billionaires don’t mind looking like an idiot. That’s the whole point,” he said.

Indeed, his book is largely about the importance of self-confidence. “I didn’t want people to think it was an elitist book glorifying the ‘bad’ kind of billionaire,” he admitted to the Observer. “Drinking like a billionaire means to drink like someone who is empowered and totally in control, someone with a sense of unapologetic joy.”

By the third and final wine, a 2012 Chianti Castello di Monsanto Classico Riserva, the buzz in the crowd was, well, decidedly biochemical. Then they scurried home—maybe in time to catch the debate, confident that they had perhapts experienced the best pre-event inoculation possible. 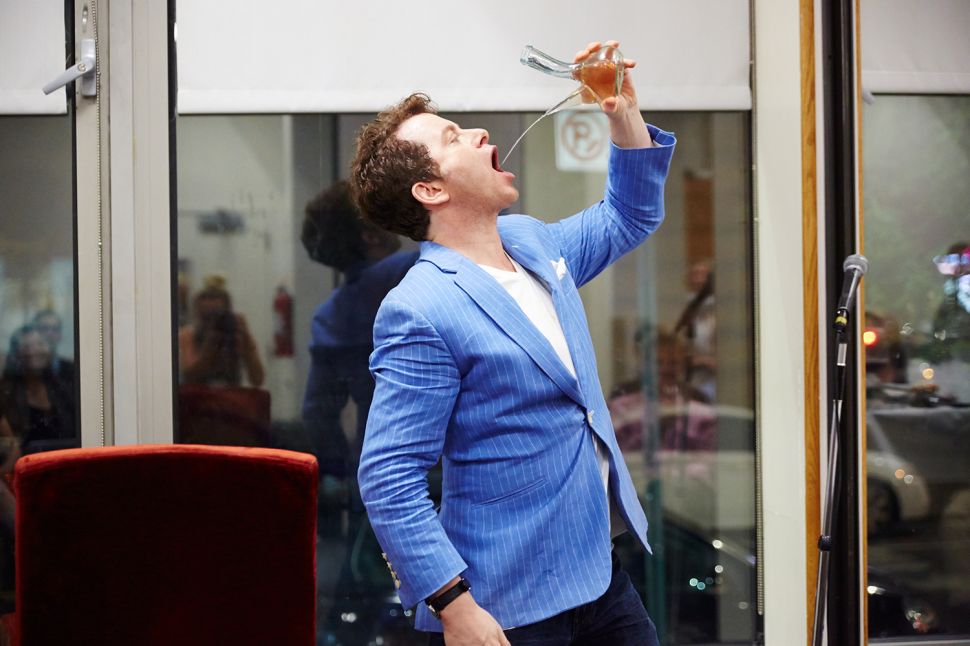