Since it opened in 1972, Le Mérdien Etoile has been considered the largest hotel in Paris, and the crown jewel of the hotel group’s over 100 (and growing) properties. With that came hundreds of thousands of guests from around the world, sometimes more than 500,000 per year, as the hotel concept arm of Air France. In 2005 it was acquired by Starwood Hotels, now owned by Marriott, and under the direction of New York-based Global Design Director Julie Frank, it has adopted a fresher, lighter aesthetic with hints of Parisian cultural mainstays. “When we acquired it, it didn’t have a very defined view of design,” recalled Frank during a visit to the hotel earlier this month on the eve of its grand reopening. “For me, the challenge was bringing a French brand back to Paris – these are the toughest critics.”

Throughout the hotel one finds mid-century modern parallels to the heyday of Air France, including their contribution in creating the Concorde, reflected in the light fixture hanging above each bed. “We wanted the allusion to be there but yet still be subtle,” Frank said of her design process behind this single fixture depicting the silhouette of the aircraft which took several months to master. “We wanted the light to have a visual impact on entry, yet be functional for the user, while providing guests with the right experience from all angles. When we finally got to the current solution and we realized all the boxes were ticked it was very gratifying. And thankfully it was impactful! Often practicalities can dilute designs, which fortunately wasn’t the case here.”

There are more allusions to the context that surrounds the hotel, including the carpeting throughout, which was inspired by Chanel’s iconic tweed jacket. “In our design, we strive allusions rather than literal references,” Frank explained. “The carpet was a custom design, and when the design firm began to focus on couture of Paris as a narrative, and what was more iconic and Parisian than Chanel? Hence the inspiration for the carpet. The subtle nod to fashion continues throughout the guest rooms – from the stitching on the light fixture that is inspired by the stitching on a suit or blazer, to the similar stitching type on the desk chair – which like a rain coat or trench has a protective exterior fabric and a softer patterned lining fabric.”

Should you not be able to score a room at the 17eme property, especially during The French Open when it reaches peak occupancy thanks to its location just a stone’s throw away from Roland Garros Stadium, there are several other common areas to enjoy too. The hotel’s ground floor “hub” includes the decades old power lunch spot, Le Méridien Jazz Club, a landmark favored by locals for its legendary jazz performances by BB King and Dizzy Gillespie, as well a duo of bars. The first by Illy Coffee where visitors can indulge in Instagram-worthy latté art, and Etoile Bar where a full menu of signature sparkling beverages like the Spritz Chambord and the Spritz Edelweiss make for an ideal aperitif. 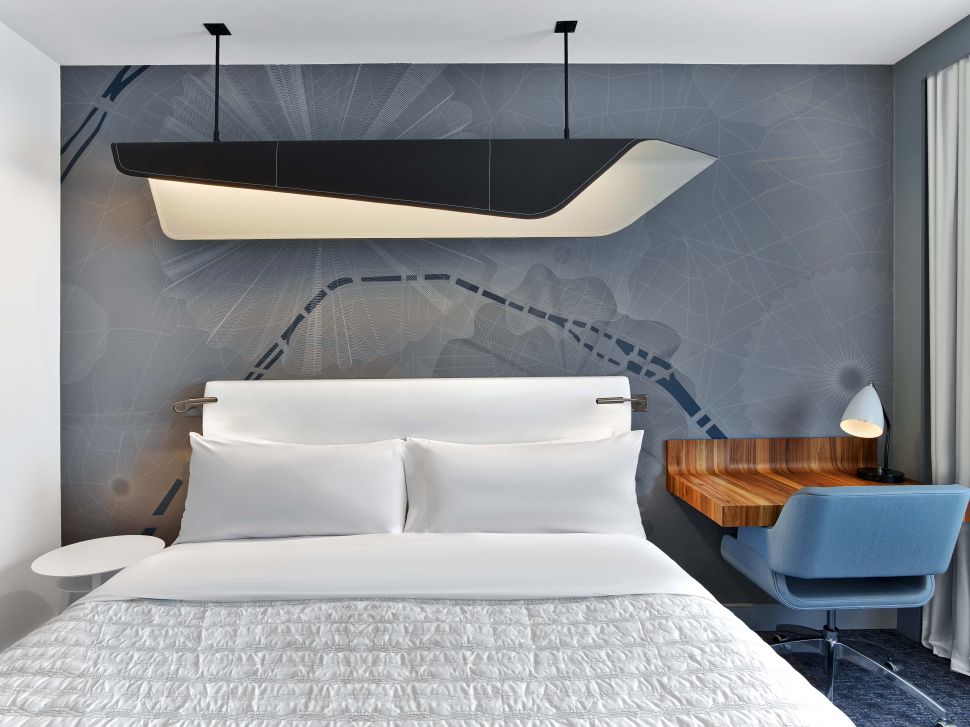