As controversial San Francisco 49ers Quarterback Colin Kaepernick prepares to make his first start since his much-discussed kneeling during the National Anthem, reports are coming out the National Football League is experiencing a slide in television ratings. Some blame Kaepernick for tarnishing the NFL brand.

On Facebook, perennial presidential candidate Mike Huckabee chastised the “the NFL Commissioner’s mealy-mouthed quasi-endorsement of players imposing their grievance politics onto the game” for ratings that are “dropping like Target’s stock price.”

John Calvin concurred in the American Spectator: “May I be bold enough to suggest that the decline in ratings is primarily due to the NFL’s embrace of several of its players’ repeated blasphemy of our National Anthem prior to each football game? A situation…that the NFL could control if it really wanted to.”

Fans are more willing to shell out the big bucks for the big games, whether Kaepernick is kneeling or not.

But the NFL claims that other polling data shows the image of professional football players and the sport is up, despite the viewer decline. Critics scoff that those numbers lie, but seem surprisingly trusting of diminishing ratings polling. If anything, both sides seem to only trust the numbers that confirm their viewpoint.

In fact, the NFL ratings slump predate Kaepernick’s high-profile protest. The decline has been occurring over the last several years, so the argument that the NFL was just doing fine until the quarterback kneeled during the National Anthem isn’t supported by the evidence.

Polls and ratings aren’t the only methods to measure whether Colin Kaepernick is hurting the NFL’s image. ESPN’s data on NFL attendance show that from 2015 to 2016, attendance rose slightly from 68,273.84 fans per NFL game to 68,630.03. Last year, the percentage of tickets sold was 96.7 percent; this year, it is 96.8 percent. That’s right; fans are more willing to shell out the big bucks for the big games, whether Kaepernick is kneeling or not. And the 49ers now place 12th in attendance, the same as last year.

Another way to gauge whether this alleged anger against Kaepernick is costing football is to look at college football, given that athletes at Michigan, Nebraska, and other schools have held protests during the National Anthem. Sure enough, college football is dominating the TV landscape, beating the competition in head-to-head match-ups.

Many excuses have been given for the slight drop in NFL viewership. Some suggest that it’s the heated Trump-Clinton race, which has everyone fixated on politics instead of sports. That might explain how the first presidential debate cut into Monday Night Football’s numbers, but not other games.

Others argue it has to do with the baseball playoffs, but those occur every year. Furthermore, baseball was tied with football for fan support in 1985, but twice as many people like football than baseball today, according to Harris polling results.

The Samford University Sports Business Report may have revealed the real reason why the NFL is losing TV viewers. People are watching the game in different ways, even live-streaming it. “The NFL has done this to itself because they created these multimedia packages and allowed its constituents to be able to access their content online with the NFL Mobile Network,” writes Ryan Hughes. The declines are actually in traditional television viewing, not in viewers, therefore.

A recent visit to a Verizon shop resulted in a packed store, with vendors wearing football jerseys showing me how to watch NFL games on my cell phone. Currently, ratings agencies are trying to figure out how to incorporate such online viewers into determining who is watching what, according to Rebecca Fairley Raney of the website How Stuff Works.  Until we know that, we won’t know if #boycottNFL is scoring or not. 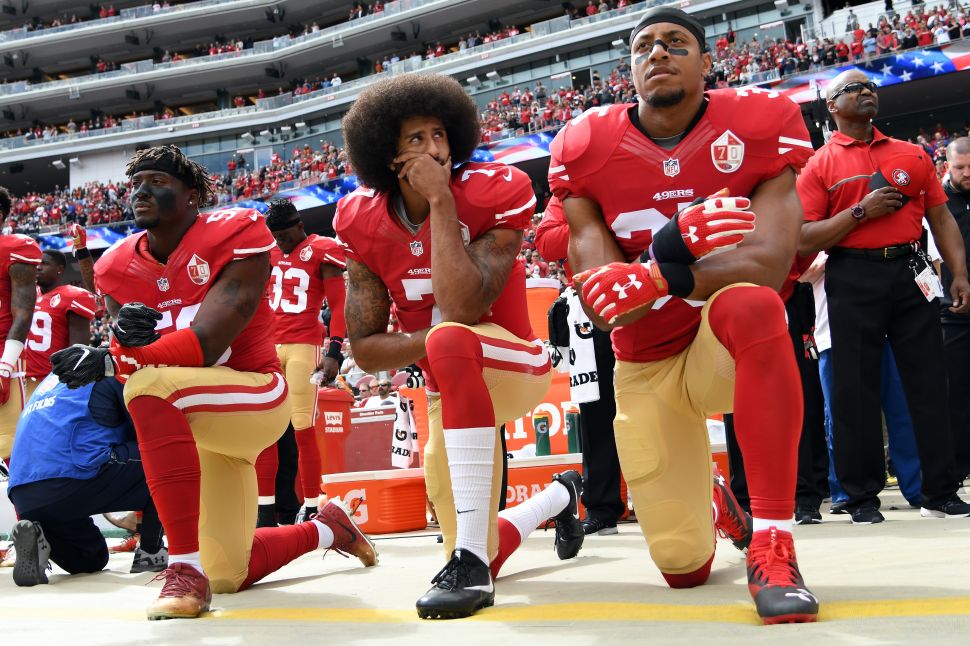