A Hillary Clinton presidency would be distinguished by unmitigated hostility toward Israel. Clinton would surely use her authority to coerce the Jewish State into fulfilling her ultimatums without any respect for Israel’s sovereignty or security, as revealed in emails recently exposed by WikiLeaks.

Sandy Berger, National Security Advisor under Bill Clinton, advised Hillary that if Netanyahu continued to be an obstacle to her goals, she would “need to find the ground from which you can make his politics uneasy.” Astonishingly, Berger was aware that “failure is a real possibility” and felt that any risk to Israeli lives was worth it.

Clinton and her entourage can be expected to employ pressure tactics against Israel, even if it means putting countless Israeli and Palestinian lives in danger. Former U.S Ambassador to the United Nations Thomas Pickering proposed a secret plan to stir up Palestinian protests “just like Tahrir Square” in order to force the Israeli government into peace negotiations. Pickering admitted that this plan could overthrow the Palestinian Authority and that widespread violence would inevitably break out. Clinton requested a print copy of Pickering’s proposal.

Former Clinton aide Anne-Marie Slaughter proposed shaming Israel into accepting a Palestinian state. This “Pledge for Palestine” initiative would raise funds from wealthy individuals to promote “global solidarity with the Palestinians.” Clinton replied that she was “very interested” in Slaughter’s proposal and requested further details.

“A Potemkin process is better than nothing,” said Clinton, apparently uninterested in a genuine peace agreement between Israel and the Palestinians and unconcerned about the ramifications of a meaningless agreement that ignores Israel’s security.

Clinton’s campaign chairman John Podesta’s subscription to far-left organizations that publish op-eds such as, “So What if Iran Got Nuclear Weapons?” raises questions about how seriously Clinton and her entourage take the threat of a nuclear Iran. Clinton herself recommended an op-ed by Gary Sick which characterized former Iranian president Ahmadinejad as a populist and the U.S and Israel as corporate exploiters. Sick has also accused Netanyahu of exaggerating Iran’s nuclear threat to Israel and “crying wolf on Iran.”

Correspondence between Sidney Blumenthal and Clinton is another grim predictor of a Clinton presidency’s treatment of Israel. While Clinton denies soliciting advice from Blumenthal, her emails tell a much different story. Blumenthal sent numerous emails containing anti-Israel advice and articles, many of which were written by his son, Max Blumenthal, a vicious anti-Semite. The launch for Max’s anti-Jewish book Goliath, which compares Israelis to Nazis and calls for the purging of Jews from Israel, was held in Sidney’s private residence. Clinton continuously approved of Max’s anti-Jewish bigotry, showering him with compliments such as: “pls [sic] congratulate Max for another impressive piece. He’s so good” and “a very smart piece as usual.”

If that wasn’t enough to substantiate Max Blumenthal’s anti-Semitic bona fides, he is also a good friend and supporter of a “performance artist” best known for defecating on the Israeli flag. This same individual went to Yad Vashem, Israel’s national Holocaust memorial, claiming to personify the “Holocaust” and exclaiming to visitors that she was “the best thing that ever happened to the Jews!”

While Clinton has voiced pro-Israel positions throughout her career, she recently confessed that it is necessary to have public and private positions on policy even if they are contradictory. Her pro-Israel persona emerges when it suits her, much like the infamous faux southern drawl she suddenly acquired in a campaign speech at an African-American church in Selma, Alabama. Clinton campaign manager Robby Mook said Clinton should avoid mentioning Israel at public events. Other senior members of the campaign agreed with Mook that Clinton should mention Israel only “with donors.”

These emails clearly depict a person who has no love for the Jewish state and surrounds herself with advisors willing to risk Israeli lives to enforce their will on the current government—to the point of instigating violence that would result in the loss of Jewish and Arab lives.

But it’s Clinton’s receptiveness to these ideas and the hateful rhetoric promoted by her closest advisor, Sidney Blumenthal, through the writings of his anti-Semitic son that is most troubling. A real friend of Israel and the Jewish people would have flatly rejected these abhorrent ideas.

And a good friend would have asked Blumenthal why his son is filled with so much hate and what can be done to get him some help.

Bradley Martin is a Fellow with the Haym Salomon Center, a news and public policy group and Deputy Editor for the Canadian Institute for Jewish Research 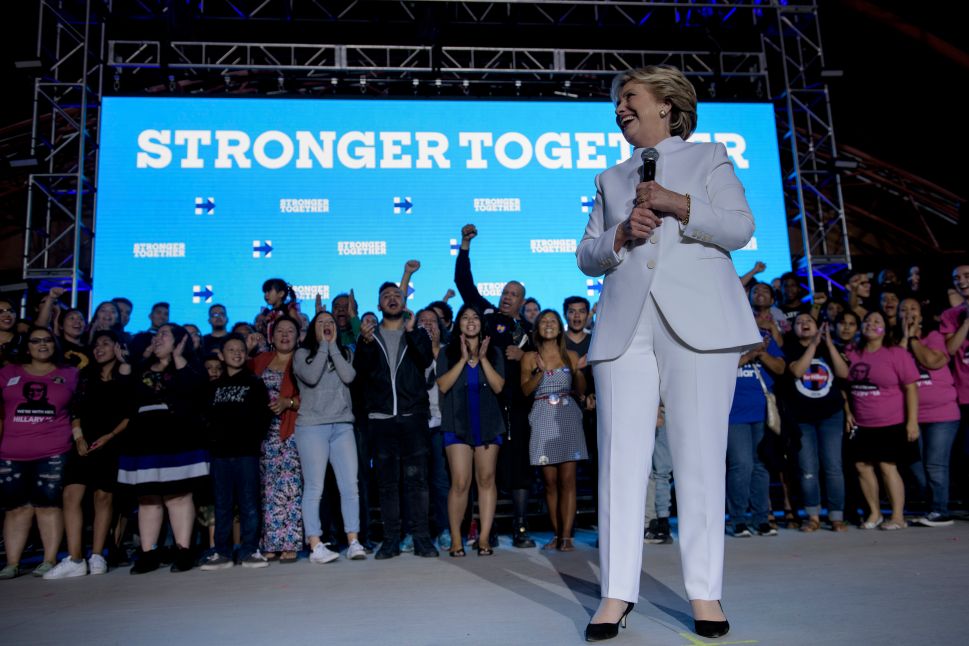