James Comey is either a shrewd, venal, titanium-blade operative or is the world’s greatest simpleton. In his aww-shucks eyelash flutter of a letter to his agency, he stated that he doesn’t know the emails’ significance, but “I don’t want to create a lasting impression.” So he was bored? Scared of Jason Chaffetz? Is by nature a compulsive over-sharer? So much for not creating a lasting impression. Kind of like having a third martini and questioning whether or not you’ll have an extended hangover. I dunno! Maybe? Let’s see! Next morning: ouchhhh.

And you thought we’d all shrug and yawn our way to Election Day after the third debate. Not so fast.

The contours appeared to be set: Donald Trump’s toxic, delusional campaign seemed destined to stagger toward the end, only to collapse and poop itself in sight of the finish line, like one of those foreign runners who embarrasses themselves in front of all of the spectators cheering at the end of the marathon. Hillary Clinton, focused, prepared and with the best month of her campaign providing her with conclusive momentum, was set to vault in a chic white suit into the winner’s circle—having convincingly stated her case to the American people.

Then came the sloppiest, most reckless, irresponsible, politicized and inexplicable abuse of power in contemporary politics by an agency director in the form of James Comey’s content-free letter to Congress. Let me be clear: Comey had better deliver something real, and soon. Tick-tock, Mr. Director. Because it looks like he willingly—quite possibly under some sort of pressure from House Republicans?—and knowingly tried to throw a bomb into the last week and a half of a Presidential race and abused his office for partisan purposes, debasing his agency and reputation.

In fact, if this has a lasting effect—which, for the record, I don’t see happening—I’ve got your “rigging” right here.

All of which is to say that today’s Twitter and cable news sonic boom is extremely unlikely to have any real impression at all. And it’s just a boom: once the loud sound goes away, the landscape is just as it was and life continues.  In this case, after the Twitter and cable news hysteria dies down and Director Comey’s gas clears the room, the campaign will resume exactly where it left off at noon on Friday. Here’s why.

First, as of Friday morning, over 17 million ballots have been cast, including over three million in Florida alone. That’s nearly a third of the total expected vote in the swingiest of swing prizes. North Carolina, where Hillary Clinton and Michelle Obama drew thousands on Thursday, has over a quarter of their vote in; in Nevada numbers are equally high. These are a foundation. No late real or imagined sputter effects there.

Second, discussions over Hillary Clinton’s email server is as old as the race itself (and by God, this race is old). Opinions on the issue are baked in. So unless there are major new discoveries in this batch of emails that look to be neither to nor from Hillary Clinton, and seem to be along the lines of what investigators had already examined, this is highly unlikely to flip a single vote.

Actually, here’s a word to the wise. This is the only litmus test to determine whether an issue matters in politics at all: does it just fall along partisan lines and further harden opinions, or does it actually change intentions? My hunch is that this event will likely lead to an increase in imbalanced screams of “lock her up!” at Donald Trump’s rallies, and resolute support mixed with some exasperation on the part of Democrats to power our girl through and work even harder to ensure a win. As for the few voters left in the middle, I don’t think that warmed over speculation around a human resources matter overshadows routine abuse of women.

Third, and this is what matters the absolute most: the candidates themselves. The reasons why voters support Hillary Clinton and do not support Donald Trump have not changed one iota. This is a distraction. It’s not on par with, say revelations of sexually predatory behavior, not paying taxes, a devotion to validation from alt-right racist and Anti-Semitic forces, a slavishly weird preoccupation with totalitarian dictators. The substance behind the race doesn’t change: what makes Hillary Clinton prepared to be an excellent president—like a track record of leadership, heart, grit, and a plan for our prosperity, security and resilience—doesn’t rise and fall with this beyond obtuse set of maybes. Power through and don’t wet the bed.

All signs credibly point to a little bit of smoke (made, it’s true, that much more tantalizing by proximity to, ugh, Anthony Weiner) but, as has been the case all long with the partisan-fueled drama over Secretary Clinton’s email server, no fire at all. In fact? Take away the late date and the salaciousness by association and it looks like every other Clinton “scandal” of the past quarter century: a nothing sandwich pushed relentlessly publicly and privately by political opposition; media theatrics, Republican innuendo and speculation; an actual investigation…and, not much at all. You’d think we’d learn by now. 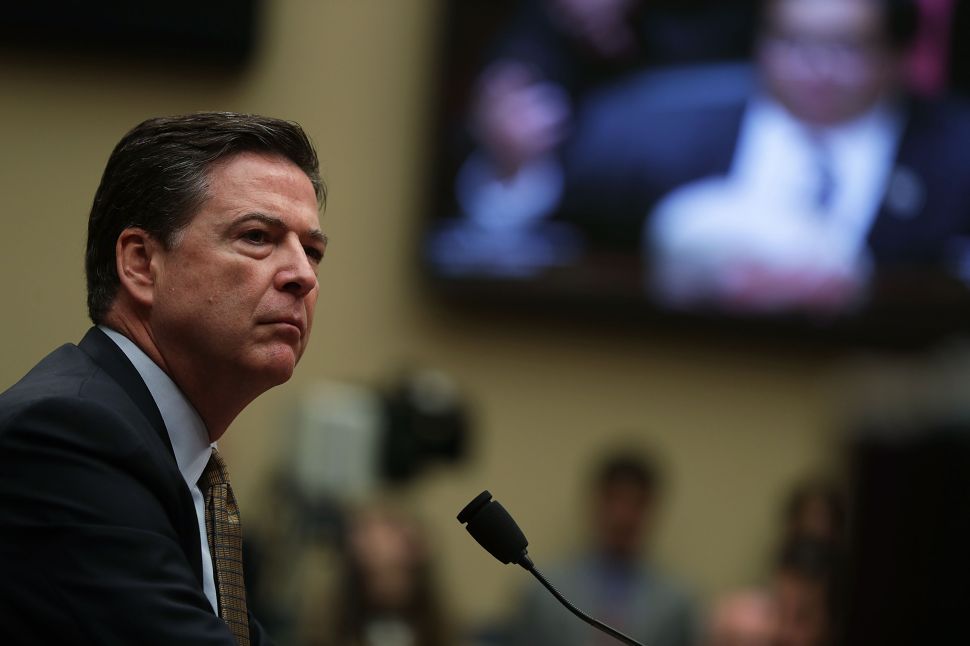