Jon Glaser, 48, is a serious man. Though best known for his comedic roles on Parks and Recreation (as Councilman Jeremy Jamm), GIRLS (as recovering junkie-turned-new dad Laird) and Amy Schumer vehicles (both on her Comedy Central show and in her movie, Trainwreck), the scruffily bearded Glaser sitting across from me on the West Village set of his new truTV show is playing our interview pretty straight.

“I’m probably going to start crying,” he warns me when I ask about his background as a Second City actor. He had been a University of Michigan senior with one semester left in college when he first took the train from Ann Arbor to Chicago to audition for the famed comedy school/theater/club in the early ’90s.

“I was so intimidated, sitting there in the lobby,” he recalls. “I was surrounded by all these people who looked like cool actors. They had funny characters they were doing. I just tucked in my shirt to look presentable. I even remember what I was wearing: I had these Gap mustard-color jeans, and a Gap denim shirt, tucked in. Light blue denim. I did O.K. in my audition. Afterward, I was walking out, and this woman came out of the theater. I had no idea who she was. I was putting on my Cinelli baseball hat…you know, that bicycle parts company? I had a long, green Army coat, Quadrophenia-style.”

The woman turned out to be legendary Chicago producer Joyce Sloane. “She was there during the heyday, with the big names…Belushi, Bill Murray, all those people,” says Glaser, misty-eyed. (Sloane passed away in 2011.) “She said, ‘You know, you’re really funny. You need training, but stay in school, finish school, don’t break your mom’s heart. Here’s my card, call me when you graduate.’ ”

“She changed my life,” Glaser insists. “I couldn’t even believe this was happening. I saved this card. I still have it. I’ve been wanting to get it framed for years.”

It’s a beautiful story, and one obviously close to Glaser’s heart. The fact that he can remember exactly what he was wearing—the color of the jeans, the coat, the brand of hat—reveals the dry, oddball humor that is the crux of his new, faux (or possibly just semi-faux,) reality show, Jon Glaser Loves Gear, which premieres this week.

The premise is…exactly that. Every week, Glaser takes on a different subculture of “gear”—camping in the pilot, an episode devoted to bike equipment, etc.—and dives in with the pornographic enthusiasm of Guy Fieri at a pig roast. In that way, Gear is a reality show: Glaser interviews and consults with experts in each episode’s unscripted portions, several of whom were found in attendance during last week’s screening of Gear at Metrograph on the Lower East Side, rubbing elbows with the likes of John Hodgman, Julie Klausner and Scott Adsit.

The show developed from a bit Glaser used to perform in New York, where he’d go onstage and talk about his love for his high-end raincoat, Arc’teryx. “It is way more jacket than I need for the city. It’s like a technical jacket that, if you’re going climbing, it’s got a ton of pull-tabs, it comes up pretty high, it’s really waterproof, but it’s breathable. It’s got pit zips.” (Pit zips seem to hold a fetishtic fascination for Glaser.)

“Basically, I’m going to stand onstage, and there will be no jokes. I will just dryly describe all the features of the jacket, and what I love about it so much. For whatever reason, this bit did really well. The set rides this ebb and flow of people kind of laughing, and then not.”

“It’s just fun to do,” Glaser says, shrugging, because one thing comedians love to do is explain to interviewers how, exactly, they are funny.

But of course, it’s not that simple. Glaser got his first writing gig on The Dana Carvey Show, after producer Robert Smigel (aka Triumph the Insult Comic Dog) saw the young comedian’s Saturday Night Live audition tape. With Louis C.K. as the head writer of a room that included Dino Stamatopoulos, Charlie Kaufman, Robert Carlock, Bob Odenkirk, David Cross and Glaser, it was a mind-melting amount of talent. (The cast also included a young Stephen Colbert and Steve Carell). While his enthusiasm for gear might be earnest, Glaser’s sincerity belies a subversively zany streak, as any fan of his Adult Swim shows, DeLocated and Neon Joe, Werewolf Hunter is aware.

“I like when the comedy comes from the drama and pathos,” says Glaser. “We play everything seriously, and that’s why it’s funny.”

And like DeLocated, the tension (and humor) of the show is drawn from the inability of Glaser to separate himself as the “star” of something from the man whose personal life is falling apart on camera. When his “wife” on Gear refuses to be on camera, Glaser hires a Nordic model to play her stand-in, only to find out, while on a camping trip to test out all his new doodads, that even his fake wife prefers the company of…well, just about anyone besides Glaser.

Despite having his name in the title, Glaser has a hard time considering himself a celebrity in the comedy world. “I wouldn’t describe myself as a celebrity,” he demures. O.K., but could he describe himself as a jacket? 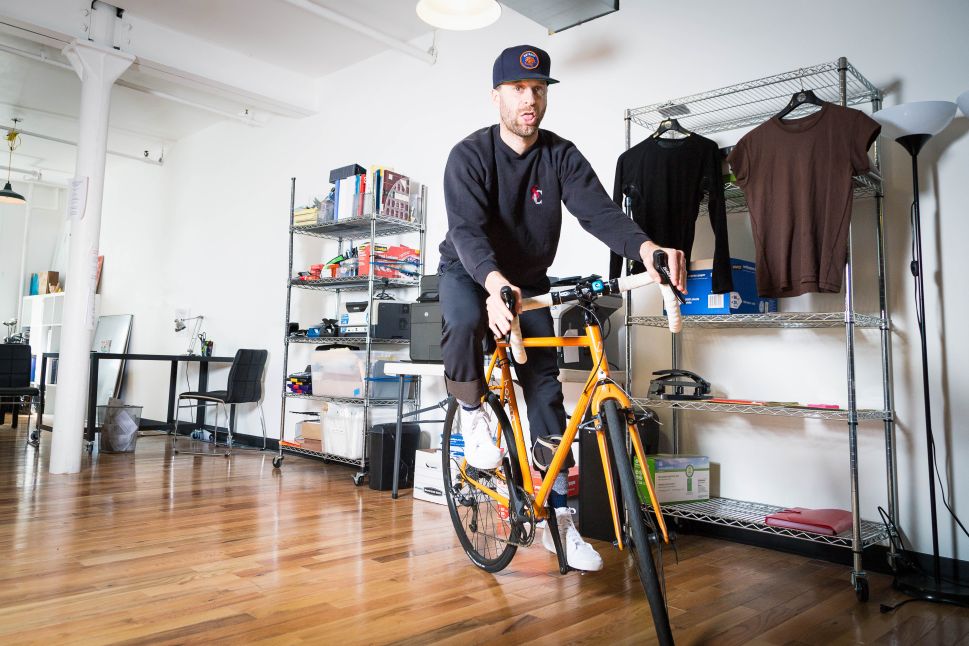