Holding three presidential debates inevitably lends itself to the narrative arc of a trilogy. Sure, to some extent that might just be reporters and TV networks trying to jam actual events into a preconceived, precast mold of the “story”—an idea Joan Didion argued in her 1988 essay ‘Insider Baseball.’ But as a culture we seem attracted to the concept of three tries: it recurs in movies, baseball series, coin flips, boxing rivalries and felony sentencings, among other places.

And at first glance, the debates so far do seem to have conformed to that familiar pattern. Like Luke Skywalker in Star Wars and The Empire Strikes Back, Hillary Clinton blew up the Death Star in the first debate, then lost a hand in a bloody lightsaber duel in the second. Or, from a Donald Trump supporter’s view, he got outboxed by the hotshot favorite like Rocky in Rocky, but came back in an ugly slugfest like the Italian Stallion did in Rocky II.

For the third installment, we’d expect something like Return of the Jedi or Rocky III, an overblown and exhausting spectacle with a couple indelible scenes. And that’s certainly what we got.

But in truth, this year’s debate series resembles baseball more than movies—mainly because politics, like sports, takes place in something vaguely like real life. And in that quasi-reality, the Trump campaign is a team playing out the season well after it’s been all but eliminated from contention.

The mogul’s slide in the polls, which started after the first confrontation with Clinton last month, has become an avalanche. It gathered mass from a leaked 2005 video clip that caught him talking about forcing himself on women, and from mounting accusations from ladies alleging the as-seen-on-TV tycoon had treated them in just the way he described.

The spate of mildly embarrassing emails hacked from the account of Clinton campaign chairman John Podesta have done little to slow the GOP nominee’s downward momentum. Surveys find Clinton running even or ahead in traditionally Republican states like Arizona, and leading comfortably in key swing states like Pennsylvania.

Appropriately, the pair met for their final showdown in Las Vegas, a city that seems like a living metaphor for our present political moment: a mecca of neon-drenched decadence ringed in vast desert wastes.

Even though, like last time, the pair eschewed the traditional introductory handshake, tonight’s debate started almost like a normal presidential match-up. The pair rehashed the arguments over abortion and gun rights that Democrats and Republicans have bickered over for decades, from standard liberal and conservative standpoints.

But by the time they got to immigration, things took a by now-familiar weird turn, as Trump insisted his immigration plan would remove “bad hombres” from the country.

Nothing compared though to his response to a question from moderator Chris Wallace about the GOP candidate’s increasingly ominous forebodings at rallies about a potentially “rigged” election next month—and about whether the Queens-born businessman would accept the results.

“I will look at it at the time,” said Trump, taking a tack unheard of since the Southern secession after Abraham Lincoln’s election in 1860. “I will keep you in suspense.”

The candidate continued to retread complaints about a “dishonest” media and fraudulently registered voters.

Clinton called the answer “horrifying,” and claimed it was part of a pattern for Trump: one visible in his reaction to all his losses, whether in particular GOP primaries or when his show ‘The Apprentice’ failed to secure an Emmy.

“Every time things aren’t going his way, Donald says it’s ‘rigged,'” she said. “Let’s just be clear what he’s saying, what that means. He’s talking down our democracy. And I for one am appalled.”

Trump dug in with harsher and fiercer claims of Clinton’s criminality, alluding to her infamous email server imbroglio, and the subsequent investigation that labeled her “reckless” but nothing legally actionable.

“She’s guilty of a very, very serious crime. She should not be allowed to run. And just in that respect, I say it’s rigged,” he declared.

When Wallace pressed Clinton with a line from a speech she gave to a Brazilian bank in which she used the phrase “open borders” favorably, she quickly pivoted to an attack on Wikileaks, which obtained and released the speech. She highlighted the electronic trail linking the hacked materials to Moscow, and called her opponent a “puppet” of Russian strongman Vladimir Putin.

“This has come from the highest levels of the Russian government, from Putin himself,” she said. “We’ve never had a foreign government trying to interfere in our elections.”

The ensuing argument with Trump was one of the few occasions her composure cracked and she became visibly angry. The developer continued to praise the Russian government, but denied any relations with it, and insisted Clinton’s policies as secretary of state had widened the Kremlin’s sphere of influence globally.

When Wallace confronted the former first lady with evidence that donors to her husband’s foundation received special access to her at the State Department, Clinton again declined to counter the allegation. Instead, she pointed up the sketchy dealings of Trump’s own eponymous foundation, which has used donor funds to purchase oversized portraits of the candidate at charity auctions, to make at least one illegal political contribution and to settle lawsuits against him.

She also harped on Trump’s refusal to release his tax returns, which every other White House candidate in the past four decades has done.

Trump, for his part, bashed the Clinton Foundation as a “criminal operation” and noted it has accepted cash from despotic regimes like Saudi Arabia and Qatar. As it happens, it has also taken $100,000 from the Trump Foundation.

As expected, the snowballing allegations of sexual misconduct against Trump also arose in the discussion. The candidate continued to dismiss them, arguing that they originated from either motives of fame-seeking—or from the Clinton campaign.

“Those stories are all totally false,” he said.”I didn’t even apologize to my wife becuase I didn’t do anything.”

He also denied knowing his accusers, even though one is a People Magazine reporter who covered him for years.

Clinton linked the accusations, and Trump’s 11-year-old hot mic remarks, to attacks he has made on Venezuelan beauty queen Alicia Machado and on Mexican-American Federal Judge Gonzalo Curiel (who allowed a fraud case against the Trump University real estate seminar to proceed).

“Donald thinks belittling women makes him bigger,” she said. “I don’t think there’s a woman out there who doesn’t know what that feels like.”

“It’s not one thing. This is a pattern, a pattern of divisiveness, of a very dark and in many ways dangerous vision of our country,” she said. 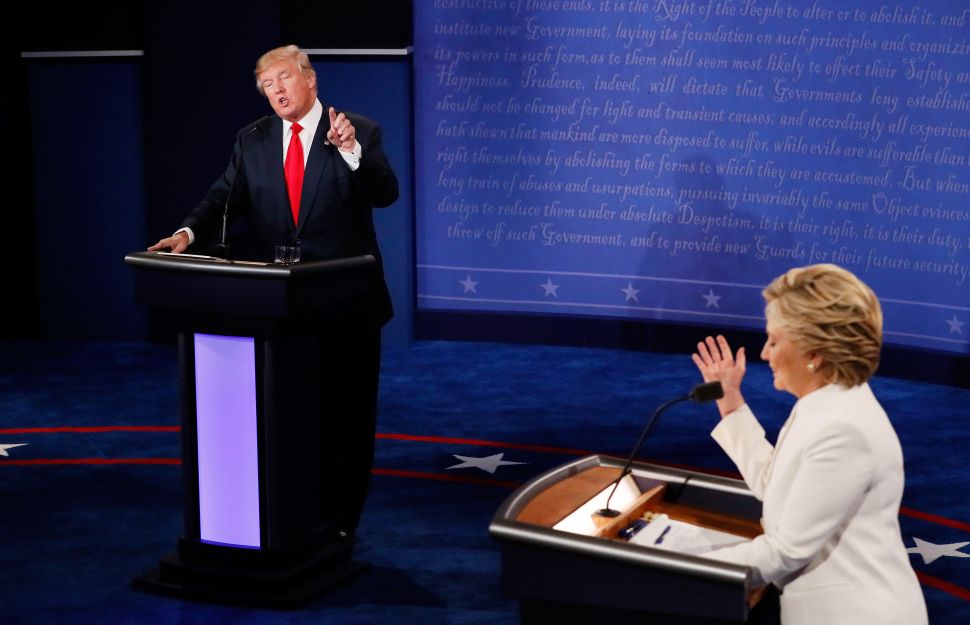