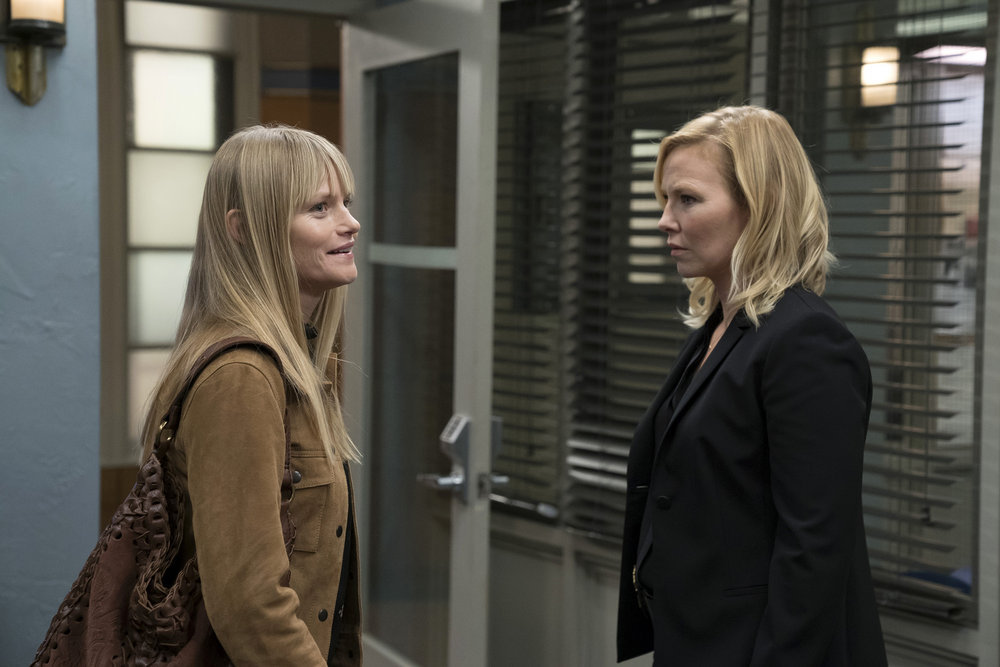 Just after World Mental Health Day (which was on Monday, October 10th) it seems fitting that the always on-point SVU would release an episode that tackles the often intertwined relationship between mental illness and the law. While it’s a good thing that this correlation was addressed, it’s a bit sad that it was in this somewhat rushed manner.

The episode opens with Rollins’ troublesome sister Kim pleading with the parole board to release her so she can be with her sister Amanda and her infant niece Jesse.

It becomes clear that Kim is getting out when Amanda reveals to her boss Lieutenant Benson that Kim will be moving in with her. Benson firmly warns Amanda that if she gets mixed up in any future legal trouble with Kim, she will take her shield.

Cut to a woman excessively exercising on a treadmill. After she reluctantly finishes her high intensity workout – at the request of her husband and young son — the attractive wife and mother heads to a bar and begins knocking ‘em back. When she spies an attractive gentleman watching her, she saunters up to him and it’s obvious that the two are clearly headed toward an encounter.

Cut to the women, her dress now ripped, bruises and blood are evident on several areas of her body. She’s running, barefoot, jumping from rooftop to rooftop. She only stops because the cops grab her.

At the hospital, Benson and Rollins attempt to find out what happened to the woman, whom we learn is named Jenna. Jenna seems sort of aloof about the whole thing but when her husband shows up she says she was raped.

After some investigating, Carisi and Finn track down the man, Michael Wheeler, who was with Jenna that night. Wheeler says that Jenna came on to him, that she’s a prostitute. A bartender confirms that Jenna frequents that establishment on a fairly regular basis and always leaves with a man.

When Benson and Rollins confront Jenna about this at her home, she tells them that it’s true, that she’s been working as an escort. When her husband bursts into this conversation, he says that they detectives will find out sooner or later… then he announces that Jenna is a world class athlete, that she’s training for the 2020 games and this is why they have to be careful with her image.

Because of that image, Jenna doesn’t want to testify against Wheeler. Neither do any of the other prostitutes that he’s attacked. Seems Wheeler has a pattern – he believes that if he pays for it he can do anything he wants, including brutally assaulting women.

In the midst of this, Kim shows up at the precinct unannounced, which pisses Amanda off. After Amanda sternly sends Kim on her way, Carisi tries to calm Amanda and admits that he thinks Kim really seems to be trying to get it together. Amanda is still skeptical of her sister’s true intentions.

Getting their case back on track, the detectives ask Jenna to participate in a ‘planned meet’ with Wheeler in which Jenna will wear a wire and try to get Wheeler to admit that he raped her. This meeting is moving along but things go awry when Jenna’s husband shows up unexpectedly.

Finally, Jenna agrees to testify against Wheeler and things go even further awry as she gets upset when she feels the defense attorney is insulting her figure. Hearing his remarks, she jumps up and takes off her shirt to show off her body.

When Barba tells the court that he wants to recall Jenna to testify again now that’s she’s on medication, Wheeler’s defense team folds and he takes a plea.

Jenna and her husband announced that rather than focusing on training for the next Olympics the pair are working on keeping Jenna healthy and on her meds.

Back at home with Amanda and Kim, Amanda catches Kim with some pills and immediately jumps to the conclusion that Kim is up to something devious yet again. When Kim explains that she has a legal prescription for the medication, Amanda is surprised to learn that her sister was diagnosed as bipolar in prison and has been taking meds for a year.

There you have it – the SVU take on mental illness.

The key thing to remember here is that this is a legal procedural show and while it’s moved a little bit into personal stories in the past few years, it’s still at its heart a crime and punishment narrative.

Tackling the subject of mental illness is tough on any series and while the effort is commendable here, there were a few missteps that kept this episode from being an absolute stand out.

First off, it seemed a little strange that when Jenna revealed to the detectives that she was working as an escort, they didn’t seem too shocked by it. (and can someone please help with a definitive distinction between escort and prostitute? Is it just a class thing — escorts are high-end and prostitutes are low end? Wait, I just Googled ‘Escort vs. Prostitute’ and it is a class thing, and apparently a legal loophole kind of thing based on ‘entertainment’ purposes. Ok, an in-depth examination of this will have to take place another time, but it is interesting, isn’t it?)

Back to Jenna and her issues. Maybe the detectives weren’t shocked because they’ve seen this in their many years of work in the unit. But, if that’s the case, wouldn’t experience have told them that Jenna’s behavior might suggest some sort of mental imbalance? Benson, in her 17 years on the job (as she proudly says on the witness stand) has to have seen this type hypersexual behavior before. Maybe because she’s in charge and not in the field as much working with the victims, she didn’t see it with Jenna as clearly this time. Rollins and Carisi were more the ones to work with Jenna, and to their credit, the pair did get Jenna and her husband to see the light about Jenna’s mental problems.

It’s also a bit convenient that once Jenna is on medication she seems completely competent in a very short amount of time. Diagnosing and properly medicating mental illness can take a very long time. There isn’t a one-size-fits-all, simply pop-a-pill plan for bipolar disorder, or for any other mental disease.

It’s understandable that this point needed to be glossed over for the sake of the time, but it still felt a bit rushed for convenience and a bit skimpy on some of the factual information about the treatment of mental disease. But, to incorporate this would have most likely changed the narrative significantly, in a way that may not have allowed for a resolution to either the criminal element of the storyline or personal closure for Jenna and these are things that viewers no doubt want in an episode of SVU.

Also convenient was Kim’s admission to Amanda that she was on meds for, yes, being bipolar. In narrative drama there is this thing can ‘dovetailing’ in which all the storylines in an episode, while significantly different on the surface, have a common theme underneath. It’s an often-used technique and some of the best episodes of TV have employed this method of storytelling. However, it’s usually a bit more subtle and not as on the nose as it is here. Having said that, it was a really effective way to advance the Rollins’ sister’s relationship in a unique manner. And, it leaves open the possibility for more drama between these two, which is exactly what viewers want anyway, right?

For those fans of the series who are curious as to what real life incident or person inspired this episode, it seems that at it’s foundation is the story of Suzy Favor Hamilton, an Olympic runner who while married with a child became an escort. After discovering that she suffers from bipolar disorder, Hamilton quit working as an escort, wrote a book about her experience, and is an advocate for mental health.

(On a side note, as a young runner, I looked up to Suzy Favor Hamilton. She was very well respected in the running community for her training and dedication to the sport. While I knew I’d never go to the Olympics, I did become a sponsored athlete and at the time I felt like that put me, in some ways, at the same level as Suzy – in my mind that was a huge accomplishment. When I heard about the turn her life had taken, I was pretty shocked and confused. I know that I can never truly understand the choices she’s made or what’s she’s been through, but I’ll always respect her as an athlete and as a person and wish nothing but the best for her.)

Overall, this was a strong effort by the creative team at SVU to shed light on the fact that mental illness is a very real problem, one that can make people do seemingly unimaginable things. This episode accurately showed that mental illness is not something that should ever be dismissed, or even taken lightly. For this reason, while it had a few issues of its own, this episode was indeed a good one. 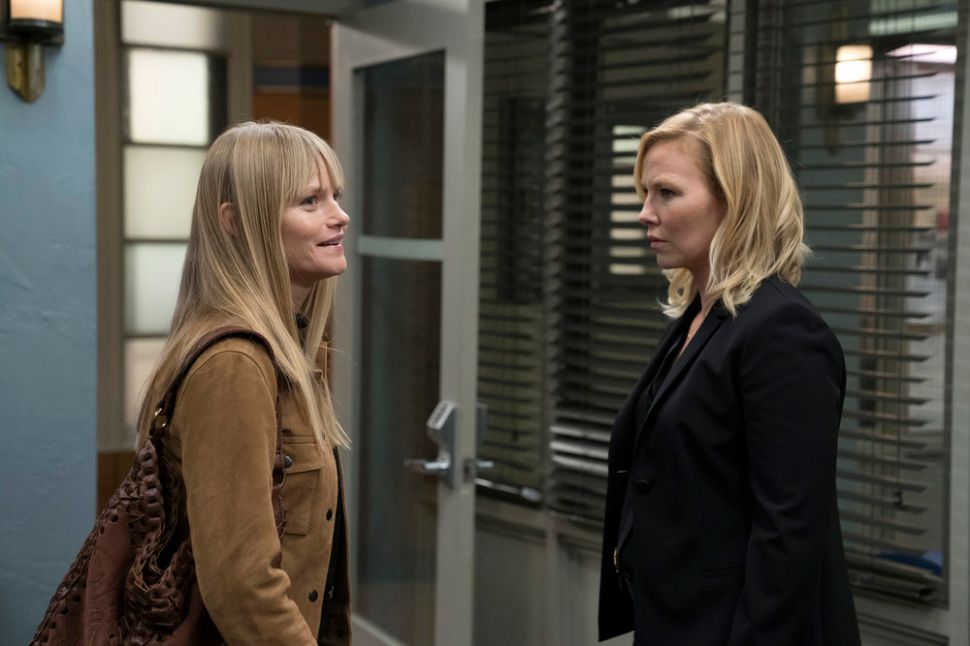