Super PACs have become increasingly controversial this presidential election. Question about getting big money and corporate influence out of politics has evolved into a bipartisan issue. Hillary Clinton may have reiterated her Democratic primary opponent Bernie Sanders’ popular call to overturn Citizens United, but only Sanders firmly disavowed Super PACs. Clinton embraced them. In fact, the latest emails released by WikiLeaks reveal how the Clinton campaign illegally coordinated with Super PACs, and the extent to which they depended upon them to boost her candidacy.

Former Democratic National Committee (DNC) Chair Debbie Wasserman Schultz rescinded a ban enacted by Obama in 2008 on donations from lobbyists and PACs to the DNC. Wasserman Schultz’s decision disproportionately benefited Clinton over Sanders. The DNC had joint fundraising Super PACs with both candidates, but didn’t use the one with Sanders, as he had promised not to use them.

The Hillary Victory Fund, the joint fundraising committee between the Clinton campaign and DNC, helped their candidate keep up in fundraising against Sanders’ grassroots campaign. Politico reported in May that the fund was being used to launder money to the Clinton campaign rather than actually benefiting down-ballot Democratic Party candidates. Leaked emails show Clinton campaign chair John Podesta was at least asked to meet with potential donors to the fund, and the Hillary Victory Fund was used as an opportunity for donors who have already maxed out contributions to Clinton to give more money. The fund may also have been used to entice Democrat superdelegates to support Clinton.

In addition to the questionable ethical and legal conduct of the Hillary Victory Fund, several emails and documents released by WikiLeaks and hacker Guccifer 2.0 suggest the Clinton campaign broke what remains of campaign finance law by directly coordinating with Super PACs. On October 18, The Intercept published a long list of examples that would seem to back his up.

In several released emails from Podesta, Clinton campaign staff suggest David Brock and Correct the Record as an option several times to discredit or attack critics of Clinton. Brock runs the Super PAC Correct the Record, which exploits a campaign finance loophole in coordinating with the Clinton campaign because its work is focused on the internet, which the Super PAC argues is legal. Brock also founded the Super PAC American Bridge 21st Century, the press watchdog Media Matters, and runs the Clinton propaganda media outlet Blue Nation Review. Correct the Record made headlines in the Democratic Primary for using at least $1 million to pay internet trolls to “correct” criticism against Hillary Clinton.

“What they are doing with Correct the Record is groundbreaking,” Paul Ryan, a lawyer at the Campaign Legal Center, told Time magazine in September 2015. “It is creating new ways to undermine campaign regulation.” The Campaign Legal Center has filed complaints against the Clinton and Trump campaigns for coordinating with Super PACs. This highly unethical type of propaganda manipulation by Correct the Record is detrimental to democracy, yet has been frequently utilized by the Clinton campaign to manufacture public consent for her candidacy.

In December 2015, a Clinton Super PAC fundraiser emailed Clinton Podesta to coordinate a seating chart for an event with donors, and another email from the same fundraiser the same month asks Podesta to speak directly with a potential Super PAC donor. In another released email, Clinton campaign general counsel Marc Elias provided Clinton campaign staff with a memo outlining how to circumvent campaign finance laws to coordinate with pro-Clinton Super PACs throughout the election.

“The emails show consistent, repeated efforts by the Clinton campaign to collaborate with Super PACs on strategy, research, attacks on political adversaries and fundraising,” wrote Lee Fang and Andrew Perez for The Intercept. “The cache also reveal meetings between the campaign and Priorities USA Action, and that campaign officials have helped with the group’s fundraising.”

Rather than denounce these tactics, Clinton has neglected to acknowledge them while they have benefited her candidacy. She has employed the political expediency of vocally supporting overturning Citizens United and enacting campaign finance reform, meanwhile her own presidential campaign has scaled back and exploited loopholes in campaign finance law more so than any other candidate in history. 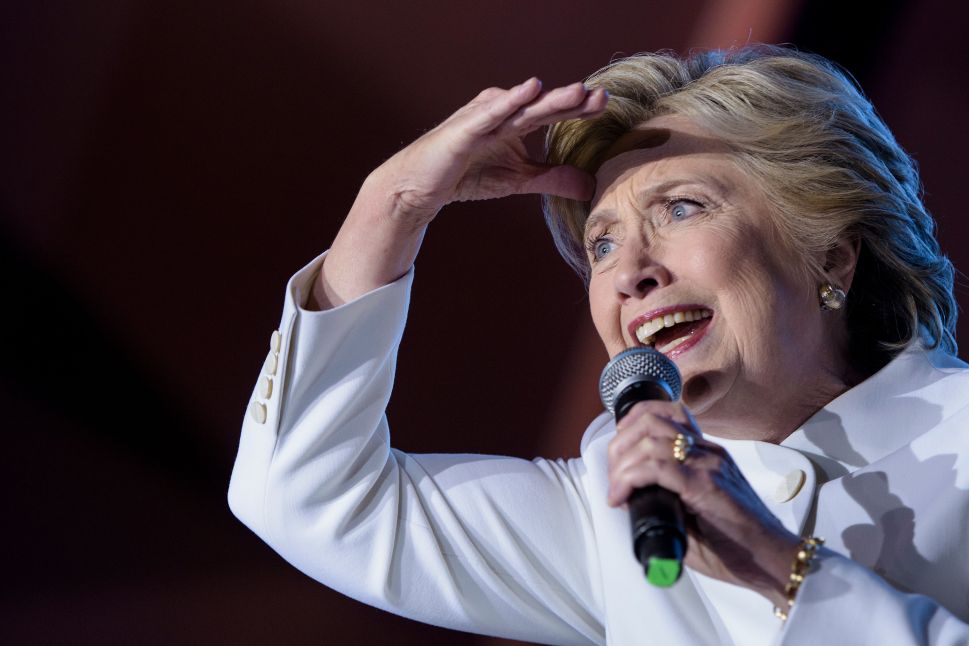