When Tiffany Gaines went to buy tampons from her local bodega in 2012, she couldn’t have known that the experience would inspire her current business, Lovability Condoms. But the humiliation she felt as an eight-foot orange picking claw was used to grab her purchase in front of a group of men buying their Saturday-night beer was enough to get her thinking. As a graduate student of Design for Social Innovation at the time, she was in a different mindset to most.

“I was able to kind of flip it on its head and say “you know what, I’m not hypersensitive,” says Gaines, 26. “It’s the design of the experience of purchasing this product which is completely insensitive. And if this was changed, then I would feel empowered rather than embarrassed.”

But after discussing it with some girlfriends, they agreed that worse than buying tampons was buying condoms and if you don’t have them, you’re much less likely to use them. On fact, only 19% of single women aged 22 to 40 use them regularly, according to a 2008 Guttmacher Institute study. So she decided to focus her energy on redesigning the condom so that it could become a product that women wanted to buy for themselves.

She decided to focus her energy on redesigning the condom so that it could become a product that women wanted to buy for themselves.

She noted that the majority of condom products were advertised as hyper-sexual or hyper-clinical, so Lovability’s new tins are gold with pastel-colored labels announcing, ‘Babe with the Power, ‘Talk Feminist to Me’ and ‘I Want It All’. The condoms themselves come in gold packaging, a color that definitely strikes a chord with her; when describing the feeling she wants to evoke in customers, she compares it to the thrill of buying a luxury gold candle from Anthropologie.

But although she loves sparkle, the products are not just about styling but also solving the concerns many young women have about condoms. The tin is functional; storing condoms directly in pockets or wallets can damage them prior to used due to friction. It also allows for discretion because, as Gaines puts it, “sometimes you feel like talking about your sexual life, sometimes you don’t and that should be our decision.” The buttercup packaging ensures that the condom can be opened right-side up, even in the dark, without fear of tearing – a common worry. And the condoms themselves are vegan, triple-tested and FDA approved.

There’s also a strong feminist slant to the rebranded company. “I’ve noticed that carrying condoms as a woman really teaches you a lot about people,” she explains from her new base in San Diego. “How a man responds to a woman who carries condoms shows that they’re comfortable in themselves, it shows if they believe in gender equality, it shows if they respect you.”

Being taken seriously has been a constant challenge for the business in its early stages. When asked about entrepreneurial struggles, Gaines rattles off several without a second’s pause.

This idea of mutual respect is very important to Gaines. She is quick to dismiss any ideas that carrying condoms means a woman is ‘easy’, which is why Lovability introduced a new product to go alongside the condoms: F***boy Repellent. A non-toxic mix of , vegetable oil and gold glitter, this spray was designed to reaffirm the brand’s message that their customers know who and what they deserve. Yet there were concerns that the gag-gift nature of the product would diminish the sincerity of their broader message, so the repellent is only available in conjunction with the condoms and not on its own.

Being taken seriously has been a constant challenge for the business in its early stages. When asked about entrepreneurial struggles, Gaines rattles off several without a second’s pause. First their credit card payment was refused by Chase Bank due to condoms being deemed a ‘prohibited adult product.’ Next she was declined by a senior investment group that focused on female-led start-ups; a seemingly perfect fit. But despite responding positively to the presentation, she was declined because her product required a behavior change: getting women to buy, carry and initiate the use of condoms.

“That really struck a chord with me because I thought how are we ever going to change the world if we don’t support companies that promote this?” Gaines explains.

So she’s starting small. Lovability is run by just Gaines and her business partner, Claire Courtney, and originally consisted of the founder assembling the products by herself in her living room – which she shared with five male roommates.

“It can be challenging because we see other businesses out there really making a splash because of big marketing efforts and ad placements but I feel like I’m forced to be creative with our messaging,” reasons Gaines.

Creative has included inviting customers to text her their questions, which she answers all day. This might seem excessive and Gaines admits that she’s had to stop an old option that enabled people to include a message with any gift purchases, as this required her to hand-transcribe them. But it’s this intimacy that supports Lovability’s aim of getting condoms into the hands of women, by making the process seem less intimidating and even encouraging mothers and aunts to buy the products for their younger family members. Considering that 15-24year olds accounted for nearly half of STIs in the US in 2008, this can only be a good thing.

Lovability Condoms are still in the early stages. After her mother became ill in 2015, Tiffany Gaines took a year off from the business and relocated to San Diego to care for her, only relaunching the business this year. The products are only sold online and through the company’s ‘A-Team’, an affiliate program which gives women the chance to sell condoms and receive 25% commission.

Yet Gaines is dreaming big. “I want every woman to carry condoms in her purse, not just for herself but for a friend who might need them.” And as for what might be next, she’s thinking of lube. “It would be easy to carry, non-messy and leak-proof, because lube does leak and it’s a total nightmare. No one wants lube in their purse!” 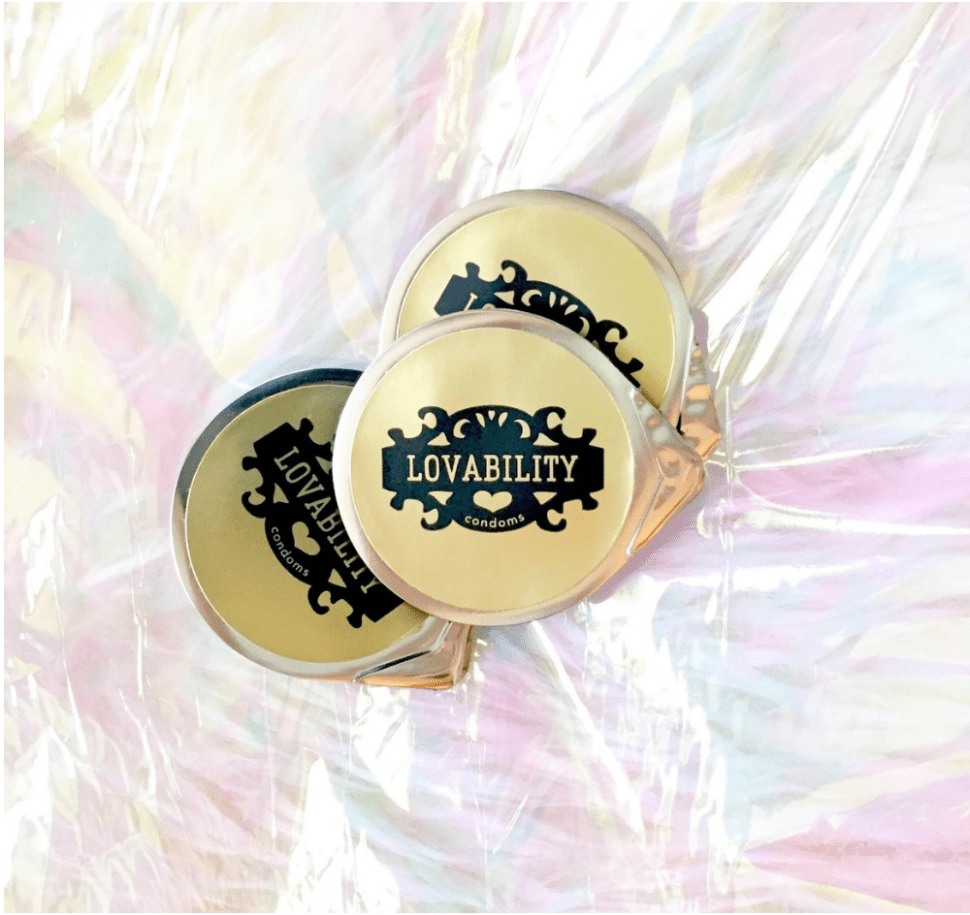