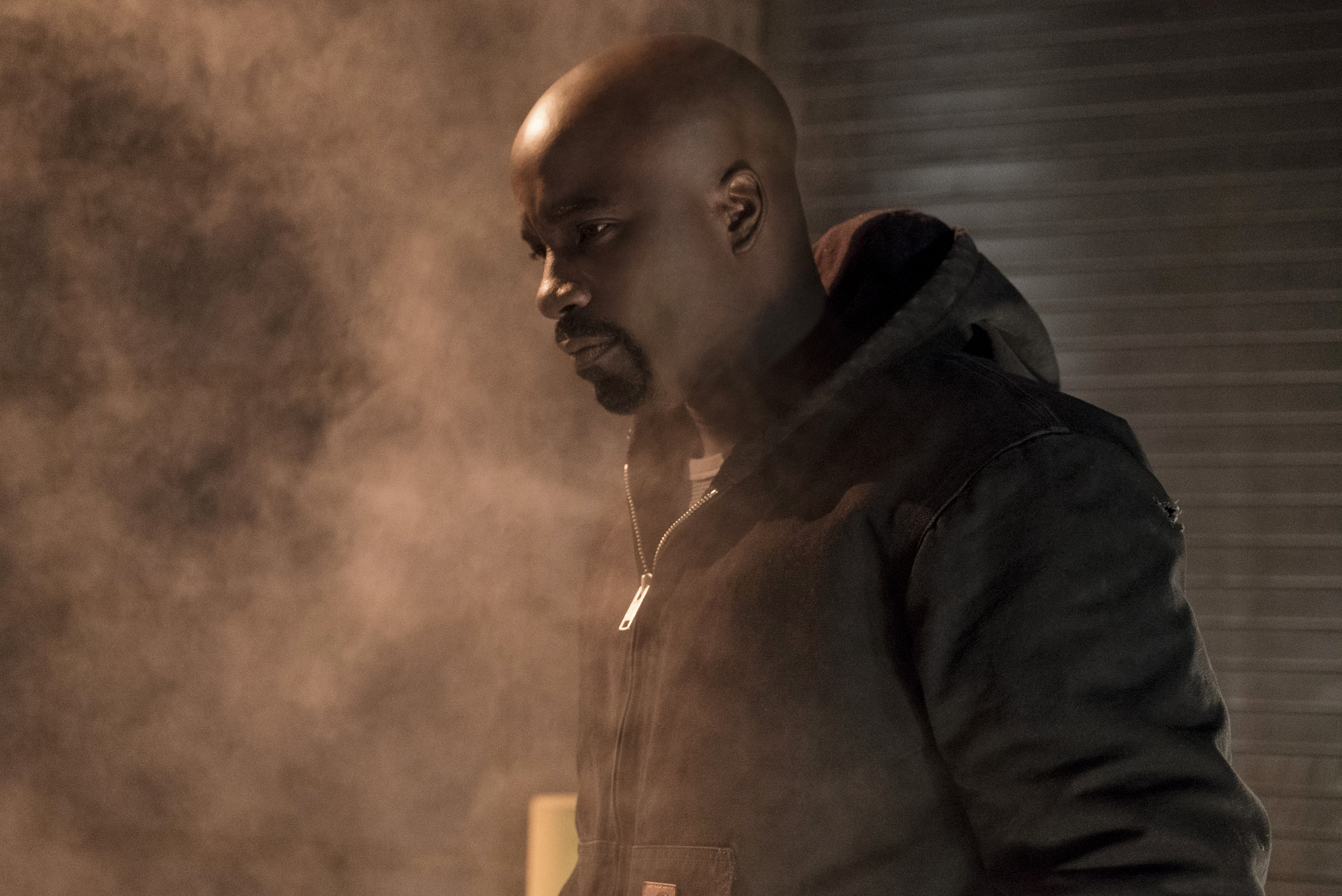 You could cut fully five hours of fat from Luke Cage without losing a single story beat or worthwhile idiosyncrasy. Seriously, it’d be possible to preserve every major plot point and every successful bit of local color, every musical performance and every smackdown, yet still delete enough dead air, aimless conversation, redundant dialogue, over-scored soundtracking, and endless scenes of people walking from place to place to create a version of the show that’s essentially as-is, but tighter and quicker and, frankly, better.

That’s never been more apparent than in the final three episodes of the show’s first season (“Now You’re Mine,” “Soliloquy of Chaos,” and “You Know My Steez”). I mean, did we need to spend nearly an entire episode hiding in a kitchen and a cellar mending Misty’s wounded arm? Did we have to build toward the attempted murder of Shades (Theo Rossi, who delivers every line like he’s just sampled something delicious from a tasting menu) for scene after scene when it led to nothing but the death of another character no one cared about? Did we need flashbacks to some random-ass boxing match involving Luke and Diamondback as kids in the middle of their present-day super-powered fist fight, which took place in front of an audience of locals, cops, and reporters for a far more fascinating vibe than some boring old origin-story bullshit? Did we have to stretch the post-showdown portion of the finale out for half a goddamn hour, stuffed with so many hard-earned victories and back-to-the-drawing-board setbacks that it felt like five finales in a row? All I know is I never want to hear another complaint about The Lord of the Rings having too many endings now that the Season One finale of Luke Cage exists.

But while the tremendous bloat weighed on the show — and while the Netflix business model of dumping an entire season on people at once and expecting them to consume hours and hours of it at a time is a slog under the best of circumstances — Cage still had enough to recommend it overall. For one thing, the dialogue was at its best during this final stretch. Not consistently so, mind you. For example, by the time of his climactic battles, first against Domingo’s Mexican mafia and then against Luke himself, Diamondback is reduced to godawful clichés like “You know when a rattlesnake is at its most dangerous? When it’s been cornered” and “Behold, a pale horse.” It’s hard to believe that in a season split between two antagonists, the long-lost brother with a lifelong grudge is emotionally outweighed by the rando who just so happened to own the nightclub where the hero washes dishes, but there you have it.

But before that, Diamondback had moments where he felt like a character with a unique personality for the first time since his introduction, rather than a refugee from supervillain central casting. His big standoff with Cage and the cops inside Harlem’s Paradise was riddled with killer one-liners: calling ill-fated City Councilman Damon Boone “Diet Obama” (“You can’t do this!” shouts the politician; “Yes We Can!” retorts the gangster); smacking down Luke Cage’s attempt at reconciliation, “Couldn’t we have made amends a long time ago?”, with “Couldn’t you have died in childbirth?”; bidding out-lived-her-usefulness employee Candace farewell with a nasty “Bye, Felicia!” as he tosses her off a second-story railing.

And while any bad guy worth their salt can deliver a few well-timed wisecracks, Diamondback, and actor Erik LaRay Harvey, really gets his chance to shine when he opens up to Boone (prior to murdering him, but whatever). Telling the story of his upbringing as the illegitimate son of Luke’s pastor father and divulging the details of the joyride that landed him behind bars while the more privileged preacher’s son was allowed to join the Marines, he begins with fake “once upon a time” good cheer and ends with tears in his eyes, voice quavering like a child’s. “I just wanted him to see me,” he says about his father. “I was a good boy. I did well in school. But he always loved Carl more.” That’s the nuance we’d seen in Cottonmouth and Mariah, and in Wilson Fisk and Frank Castle back Daredevil days. I wish it could have lasted, if only because Harvey’s so good at it, but he’s back to bluster before long.

Luke has a few of his finest moments as well. One of them is completely out of left field: Stumbling across a broad-daylight bodega robbery while he’s trying to lay low, he discovers that Wu-Tang Clan member Method Man is one of the customers being held up inside. (One of the stick-up guys had already apologized to the rap legend for inconveniencing him; “Are you really trying to have a conversation right now?” Meth replies in disbelief.) Cage and Meth exchange pleasantries — and hoodies — after the vigilante finishes dispatching the robbers. This leads to a beautifully goofball scene in which Meth appears on real-life radio personalities Sway and Heather B’s show, praising the iconic power of a bulletproof black man and vouching for Cage’s innocence before launching into an entire song about the guy, accompanied by shots of Harlem residents wearing bullet-riddled hoodies as a fashion and protest statement. It’s so crazy that it somehow works.

So does the last of Luke’s many monologues about the legacy of black communities. Several of these have fallen flat, in part because the writing feels so stiff compared to what Mike Colter’s Cage usually gets to talk about; some of his exposition about his childhood came across the same way. But when he’s questioned by Misty at the police station following his defeat of Diamondback, he explains the role he was trying to fill for his beloved adopted home of Harlem, which he touts in terms that place it alongside fin de siècle Vienna and intra-war Paris as one of the great cultural fonts of all time. True to their comic-book roots, many Marvel movies and TV shows have big-upped the Big Apple, but none has felt this heartfelt, this tied to a specific culture and community. Luke Cage isn’t great television, but this aspect in particular, and its skillful and endearing performances nearly across the board, give it claim to goodness. 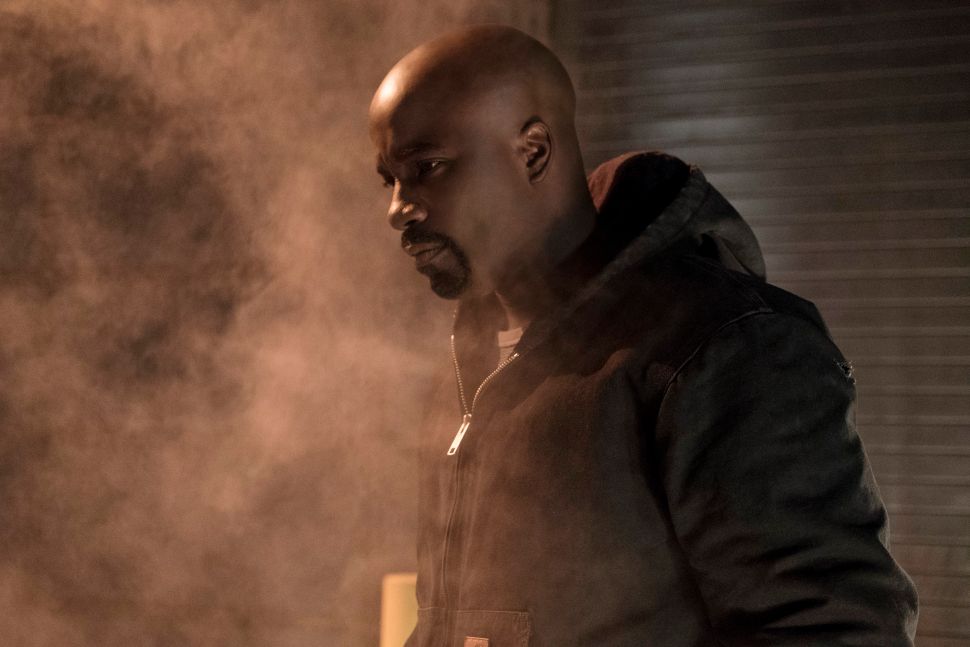