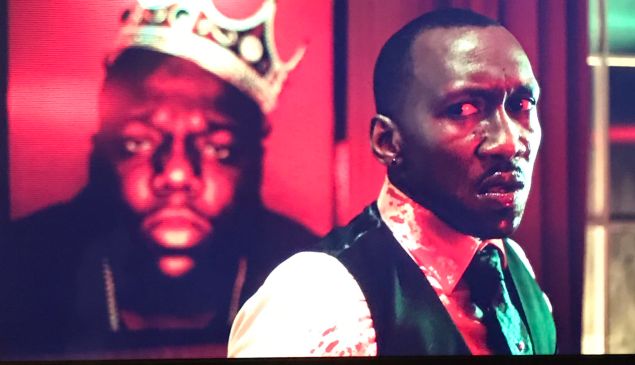 Stated for the record: With four episodes of Luke Cage under my belt, I still have over two-thirds of the season to go. (That strikes me as a problem all on its own, but more on that later.) Yet I’d be enormously surprised if anything in the nine episodes that remain tops the sequence from episode three, “Who’s Gonna Take the Weight,” in which Luke raids the Crispus Attucks compound with the Wu-Tang Clan’s “Bring Da Ruckus” blasting in his earphones. Marvel’s “hip-hop variant” cover program (in which monthly superhero comics get a special makeover designed to look like classic album art from the genre) and snippets of Ghostface Killah in the first Iron Man (the character he took his alias Tony Starks from) notwithstanding, the nexus of hip-hop and superhero comics has waited a long, long time for a moment this huge. You could make the argument that using such an enormous song helps get the show over with the audience in a way it couldn’t pull of on its own — aka Stranger Things syndrome — but I’d beg to differ. Hip-hop in general and the Wu-Tang Clan in particular have derived so much inspiration from Marvel’s heroes and villains; clearly, the makers of Luke Cage were legitimately inspired in turn. It doesn’t feel like swaggerjacking — it feels like a twenty-one gun salute.

And the scene itself more than stands on its own two legs, or more accurately plows through an army of goons on them. Just as Daredevil defined its hero’s fighting style and his overall ethos in the massive hallway and stairway fights against the Russian mafia and a biker gang respectively that served as early highlights of its first two seasons, so too does Luke Cage establish its title character’s modus operandi. Where Daredevil used a combination of martial-arts precision and sheer ability to take a beating to best his opponents, Luke is both less elegant and less endangered. Armed with nothing more than a car door, a piece of rebar he peels from a smashed wall, a sofa, and the goons themselves, he simply strides through all of Cornell “Cottonmouth” Stokes and his cousin Councilwoman Mariah Dillard’s footsoldiers, grabs what he wants, and leaves. He’s the superhero as blunt instrument, too fed up with the bullshit to be anything but a closed fist in the face of any and every obstacle. (The political resonance there is unspoken but obvious.) What we see from him here is the same approach that will get him out of both his prison and the ruins of his apartment in the subsequent episode, “Step in the Arena”: He’s too confident, stubborn, and irritated by his enemies to be stopped. Not to put too fine a point on it, but he brings the mother[censored] ruckus.

While this is the highlight of this stretch of episodes, and likely the whole season, there’s more to recommend the show at this point. Particularly in the earlier episodes, the faces of both Luke and Cottonmouth are framed like portraits in the center of the frame, often staring just above, just to the side, or even right into the camera. You’re meant to see these two men as the gravitational vortices around which everything swirls.

Complementing the thoughtful camerawork is the supporting cast, which both in terms of writing and performance remains as strong as it was in the pilot. Though Frankie Faison’s barber/mentor character Pop doesn’t live through Episode 2 (“Code of the Streets”), he has an incredible moment when he’s reunited with Chico, his employee gone bad whose attempt to steal from Cottonmouth has the whole neighborhood in turmoil. “What…were you thinking?!” he gasps, choking on the words and choking back tears. “Dummy! You dummy! You dummy!” he repeats, hugging the kid, crying with sheer regret. In a long and storied career, Faison does some of his best work in those moments. As Chico, Brian “Sene” Marc doesn’t survive a whole lot longer than Pop does, but he makes a strong impression by taking a sad, tear-streaked, vulnerable approach to his character, a kid who fronted harder than he really was. And as Luke Cage’s answer to Hannibal’s Will Graham, Simone Missick’s intuitive cop Misty Knight is absolutely sensational; anecdata from my twitter timeline indicates she’s made as strong an impression on the properly oriented as anyone since Christina Hendricks on the first season of Mad Men, and indeed she shares Joan Holloway’s combination of intelligence, confidence, humor* (her recurring bit about wanting to trademark the familiar witness refrain “I ain’t see shit” is pretty terrific), and striking beauty.

(* The show is frequently laugh-out-loud funny, in fact. There are a pair of hilarious moments when peripheral criminals take a good look at what Cage or Cottonmouth are up to and are basically like “okay, I’m out of here”; meanwhile I’ve got a feeling that Cage referring to Lisa Bonet’s daughter Zoe Kravitz as The Godfather Part II — the rare sequel that surpasses the original — will enter the parlance of horndogs everywhere.)

Alfre Woodard’s Mariah Dillard is emerging as a fascinating character in her own right. Not only is her relationship with her cousin Cottonmouth appropriately familiar. There’s a small but lovely beat when the two of them laugh about some dude’s attempt to pick her up by ordering her a Blue Hawaiian in which they interact like people who simply enjoy each other’s company, not like a pair of supervillains; it’s reminiscent of Wilson Fisk’s repartee with his inner circle of Wesley, Leland, and Vanessa during Daredevil Season One. Elsewhere, it becomes clear that she really does believe her own New Harlem Renaissance rhetoric. Yes, she understand’s that Cornell’s a criminal and that her grand plans for the area are funded by blood money, but none of this penetrates her perception of the two most important things: “Keep Harlem black, and keep us in the green.” This, too, brings up welcome echoes of Fisk, who truly believed his program of brutal gentrification would improve the city he genuinely loves as much as Daredevil does. But it takes on the added weight of Mariah’s role as a politician: There’s nothing more frightening than a powerful person who’s convinced they really are doing the wrong things for the right reasons.

But by the time the credits roll on episode four, with Luke turning to the TV cameras and, in an homage to the final scene in the aforementioned Iron Man, proclaiming “My name is Luke Cage” — thus inviting scrutiny not just for his increasingly obvious superpowers nor for his one-man war on Cottonmouth, but for his escape from the privately owned prison where he met his late wife and received his abilities in an experimental procedure meant to heal him after he was nearly beaten to death for threatening to expose the guards’ underground fighting ring — there are reasons for concern. One is character inconsistency: Since so many members of the show’s large cast have been so well-sketched, anomalous behavior stands out all the more. How do we square the Cottonmouth who was sincerely devastated that Pop’s barbershop got shot up with the man who levels an entire apartment with a fucking bazooka? Is it simply because he’s that angry at Luke for a single day’s misfortune that he’s willing to slaughter untold dozens to get at him? And what about the traitorous Detective Scarfe, Misty’s partner and Cottonmouth’s inside man? Knight has been show to be so sharp an investigator that it borders on telepathy — she’s never noticed that the man she spends every day with is a callous, murdering creep?

The biggest problem, however, is how final episode four’s final scene feels. We’ve gotten Luke’s original origin story in the prison and the reason for his emergence as a hero in the here and now. We’ve seen him take down Cottonmouth’s stronghold and survive the gangster’s retaliation. I can see one, maybe two more episodes being required to give them a final showdown. But nine? How the hell will they stretch this thing out for that long? More flashback episodes? The arrival of the oft-referenced Diamondback as an even bigger threat than his serpentine underling Cottonmouth? Crossovers with the casts of Jessica Jones or Daredevil? While DD’s first season felt like it earned the full 13-episode order, the subsequent Marvel/Netflix seasons were strained by that length: Jessica ran out of story the moment they put Kilgrave in his soundproof cage and had to resort to ridiculous contrivances to keep the thing going; Daredevil Season 2 managed a bit better by splitting itself up into mini-arcs concerned with the Punisher and Elektra, but lost steam with the need to build to a climax centered on the ninja crimelord Nobu, the character’s most boring enemy. With so many hours of Luke Cage Season One to go — well, to quote the show’s quote of Gang Starr quoting Kool & the Gang, who’s gonna take the weight? 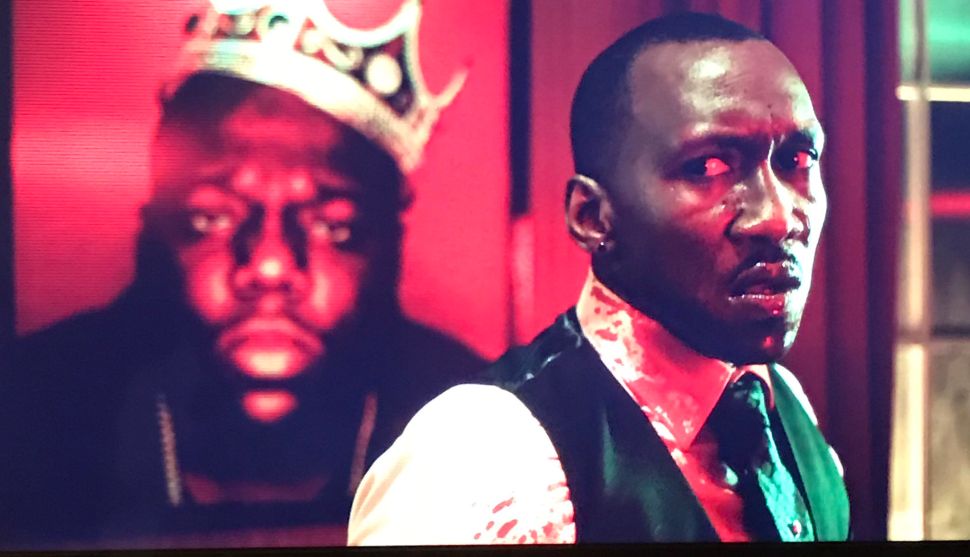