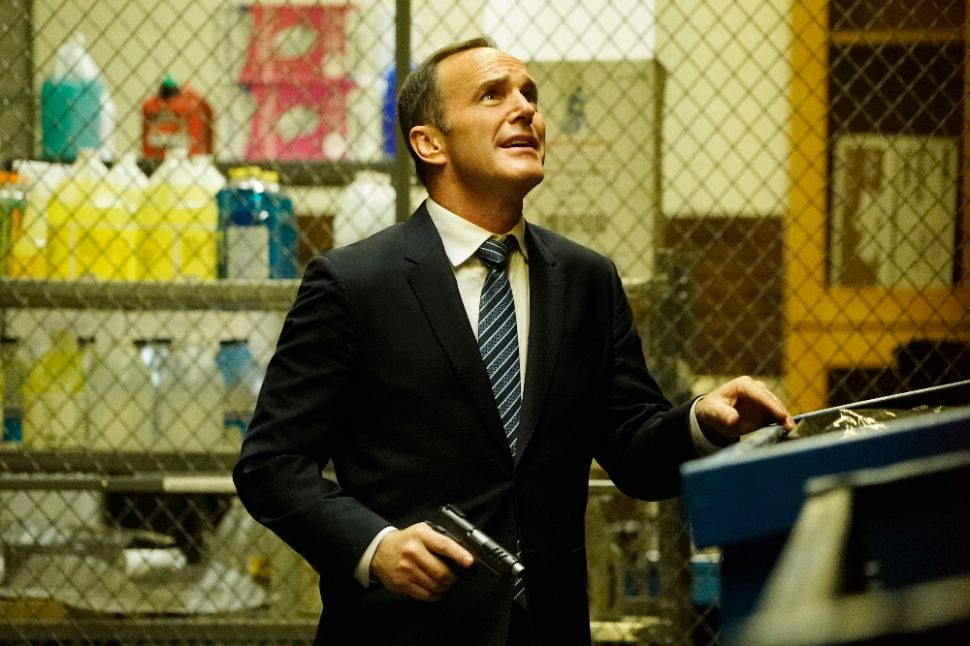 It’s time to play Agents of S.H.I.E.L.D. bingo! So make sure to follow along and stamp your card anytime you see or hear: Skye/Daisy/Quake whine about how she has to do things on her own; Poorly done CGI ghosts because they spent all of the budget on Ghost Rider’s fire; Or if they spend 42 minutes not answering any of the questions they endlessly create every episode.

The fifth episode of the season, “Lockup”, isn’t exactly the most plot-driven episode this season. Some might even say “Lockup” is referring to the show’s momentum. Zing. It’s an action heavy episode with some stand out moments that could have been a five-minute scene in another episode and moved the story just as much. The episode starts with a pre-ghost Lucy Bauer and her husband Joseph (who awoke from his coma last episode) walking around an abandoned house years before. The house belonged to the man, who killed the last person that was in possession of the Darkhold and to no one’s surprise, the book is still buried there. The Darkhold is completely blank on the inside but like the Marauder’s Map from Harry Potter, the words magically appear on the page. Interestingly, the language of the book depends on the person reading it, for Lucy it’s English but for Joseph it’s German because that’s what his first language is and it sounds more evil. So where is the Darkhold today? Turns out it’s still buried there. Current-ghost Lucy got the answer from Joseph and left him with a nasty case of the demon eyes, which eventually kills him just as Coulson and Mack attempt to interrogate him. Unlucky for Lucy, her poor CGI ghost form cannot ‘activate’ the Darkhold, much to her displeasure.

Now that S.H.I.E.L.D. has lost their only lead, Coulson decides to head back to the prison to pick up Robbie Reyes’ uncle Eli. I honestly had no clue Eli Morrow would be a character that would stick around for this many episodes. I didn’t even bother using his name in my last recaps but turns out he’s a part of this crazy, haunted puzzle too. Robbie isn’t crazy about this plan and goes to pout with the queen of pout, Skye/Daisy/Quake. Robbie believes he should be doing this on his own and Daisy tells him that S.H.I.E.L.D. just wants to help and that he should work with them, not against them and it’s like she’s not even listening to her own words anymore. She even brings up revenge and how it isn’t worth it. REALLY, DAISY? REALLY?

There still is some tension between Fitz and Simmons that is due to both Simmons’ upcoming lie detector test and Fitz’s decision to keep AIDA a secret from her. Notice the duality? Simmons is looking into micro expressions so she knows how to control herself in case any questions about what Coulson’s team has been up to come up.

Speaking of which, May and Coulson are the first members down into the prison. They are trying to speak to the warden about issuing a transfer of Eli Morrow into S.H.I.E.L.D. custody. Coulson is also very interested in May’s death; specifically what she saw when she died. The process that brought Coulson back to life wiped all his memories and before he can get an answer, the warden pulls out a shotgun and begins firing at the two of them. Turns out Lucy Bauer got there first and the warden and all of the guards are infected with demon eyes. May takes out the warden and we get to see Coulson use a very cool holo-shield upgrade from his robot hand.

Back on the ship, Mack is preparing to head down with back up, including a cure that Fitz created for the demon eyes called “Sanity.” I guess they created it from May? Robbie wants to go down but Mack still doesn’t trust him. His exact words were that Robbie “kills people that deserve it and down there, everyone deserves it.” This is sound logic however it takes Daisy to make Mack realize that he’s the only person that can kill the ghosts. Duh. Daisy brings her protective gauntlets but she still is in no shape to use her powers meaning they are just taking away everything cool about Daisy. When they arrive in prison, they stumble into one of the cell areas and realize that the Watchdogs have been recruiting, which doesn’t make the prisoners too happy to see S.H.I.E.L.D. Robbie even runs into a Fifth Street Loco gang member (the gang that shot them and put his brother in a wheelchair) and just because you couldn’t ask for better timing, ghost Lucy shows up and releases all of the prisoners. 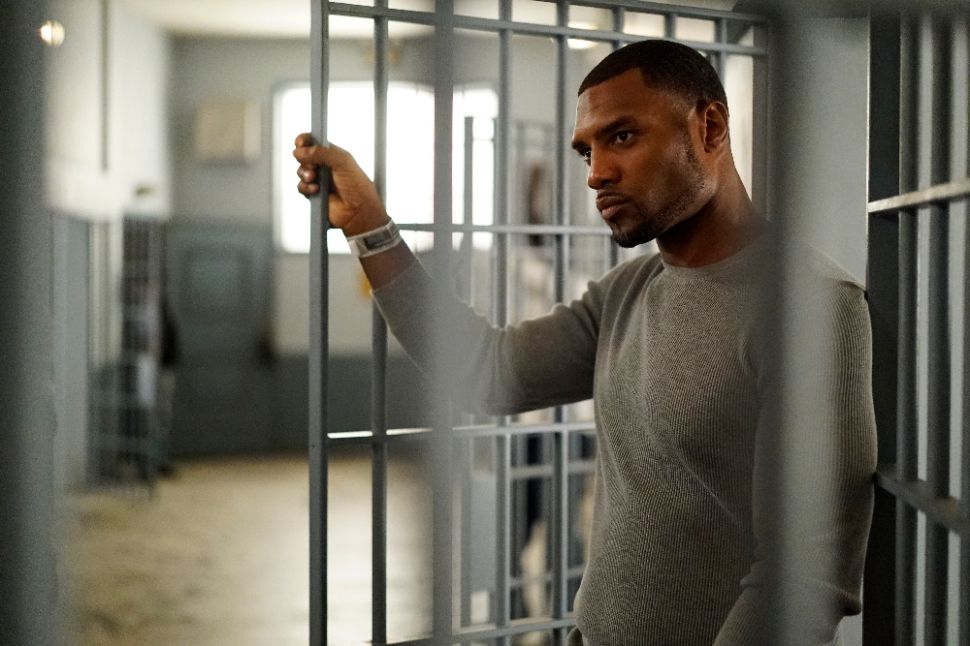 Simmons is in the middle of her lie-detector test and is doing quite well until asked if there is any information that should be brought to the attention of the Director. Not only is the test beginning to detect her stress, but Director Mace also walks in as well and very sternly asks to see her in his office. The show does some fun misdirect here as Jeffrey Mace turns on a dime from intimidating to pleading as he asks Simmons for her help. Mace has agreed to do an on-air debate with Senator Nadir (the woman that hates Inhumans even though she has one in a cocoon). They are discussing the Inhuman war on humans as the media calls it and wants Simmons to feed him information so he doesn’t jeopardize anything. Also it’s in 15 minutes. The debate has several interesting moments with one major one being that it is moderated by ABC’s own George Stephanopoulos. Some other noteworthy moments is when Jeffrey Mace is introduced they use the term “Patriot” hint hint (see episode 2 recap). They also show a photo of the UN bombing in Vienna that occurred during Captain America: Civil War where he apparently saved a woman from the blast. There is some topical symbolism as Senator Nadir starts the debate by asking why Inhuman lives are more important than human lives. She also discusses the fear and hate behind the word “Inhuman” and that she doesn’t believe Mace is the man for the job. It’s at this point Director Mace goes off-book and reveals that he is Inhuman to the world.

At the prison, Daisy meets up with Coulson and May and uses the cure to help the guards and warden. They are now all trying to escape but the Watchdog prisoners are after them and they are chased through the prison’s cafeteria. Daisy pushes Coulson and May ahead and locks the door behind them and says she has to do this by herself because this character arc will never end apparently. Coulson and May now have to find a way back into the cafeteria to save Daisy because some nice fight choreography aside, she can’t use her powers and is getting her ass kicked. While finding an alternate route, Coulson brings up the conversation about what happens when you die again but this time May simply answers that she saw him. They get back in to the cafeteria, stop Daisy from getting choked to death and she is yelled at for acting like a child. 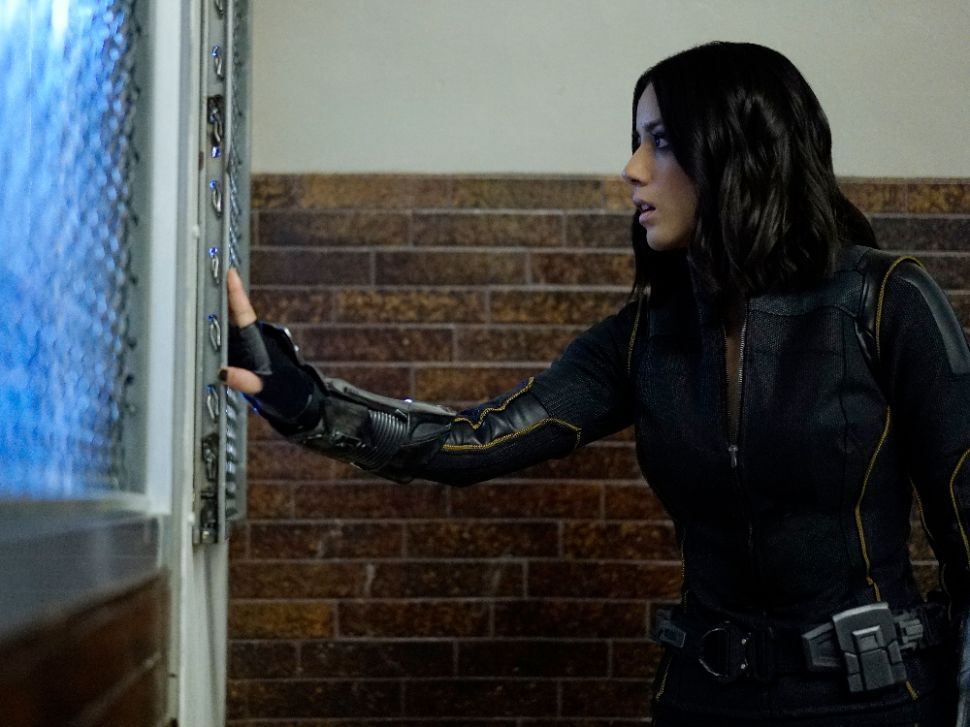 Mack and Robbie are on the other side of the prison still looking for Eli and Mack continues to voice his distrust. And of course in that moment one of the other ghost scientists shows up and attacks them. Luckily there just happens to be a conveniently placed chain lying around (there are going to a lot of conveniently placed chains this season) and he lights it up and uses it to take out the ghost. I think we can all forgive Mack for the terrible “ghost busted” line of dialogue. A second ghost attacks them and Ghost Rider takes this one out too but not before it infects Mack with the demon eyes. Fortunately for Mack, he has the cure on him. Unfortunately, he hates needles. They do find Eli and he agrees to go with them after learning Lucy has powers and wants to kill them but now we get to the ethos of Ghost Rider’s character: vengeance vs. duty. Robbie is tasked with delivering his uncle to S.H.I.E.L.D. but now that the cells are open, he has full access to the gang member from earlier. Robbie decides that vengeance wins and sends his uncle to go ahead alone while he goes to confront the gang member. He learns that apparently it wasn’t a random drive-by shooting but was in fact a hired hit. He doesn’t know who ordered it and anyone that might had mysteriously burned up. With as much information as he can get, Robbie turns into Ghost Rider and barbeques the gang member and every prisoner gets back into their cell out of fear they will be next.

So because Robbie decided to send his uncle off alone, Lucy managed to abduct him. She now plans to use him to interact with the Darkhold and finish what they started. May talks to Daisy about how she will never be able to distance herself from them when someone like Coulson cares so much about her. Simmons gets permission from Director Mace to not have to retake the lie detector test because she apparently knows something is not true about his involvement with the UN bombing incident. And even though Mace’s approval rating is skyrocketing after his reveal, the episode ends with him getting into a car with Senator Nadir who has proof S.H.I.E.L.D. is working with Quake and now Ghost Rider. Leaving Mace to ask what does she want because it only takes five episode for S.H.I.E.L.D. to be corrupt again. Until next time, true believers! 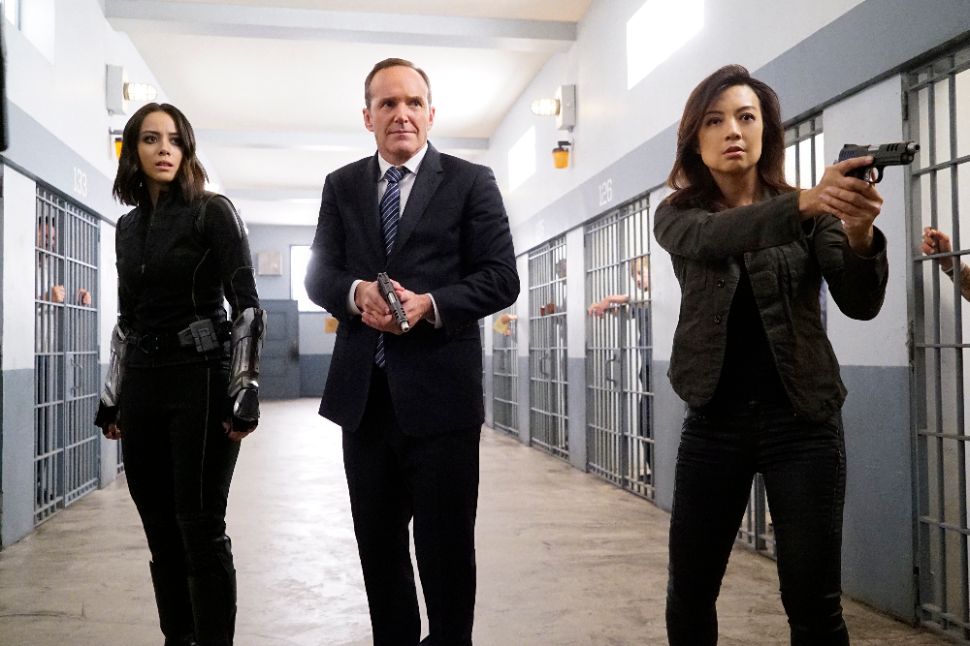