Most New York women have a fitness routine involving either barre, spinning or yoga classes. Sometimes, a bit of boxing is thrown in, or a run to the nearest park. But for the most part, Manhattanites choose expensive boutique workout classes over the closest gym’s weight room. On Instagram, however, it’s a different story. Women like Suzie B. and Katie Crewe not only dominate their gym’s weight rooms, they post addictive videos viewed by thousands of followers, offering fitness routines that are easy to follow along with.

Once you follow one of those women, expect your Instagram recommendations to quickly change from avocado toast snaps to videos of intense push-ups, burpees and true lifting, making the three pound weights you sometimes struggle with lifting seem lighter than ever. But these women aren’t typical bodybuilders, with ‘roided out muscles and torn muscle tanks. Instead, they’re focused on sharing healthy recipes and building muscle without becoming bulky.

Many of the videos feel exactly the same, and start to develop a similar rhythm. All take place in an open gym, in the weight room, with large men walking by, and at times, looking confused. The most popular soundtrack is Kanye West’s “Fade,” after the debut of his video with the ultimate fitness inspiration, Teyana Taylor. The captions describe the workout in detail so thousands of followers can recreate it in the comfort of their own gym, or simply find the inspiration to start walking on the treadmill.

Unplanned rest day today so here's a conditioning circuit that wrecked me from the other day. Why this seemed like a good idea, I do not know #sogassed. 10 back-catchers 5 wall walks 10 weighted burpees – I gave up adding the push-ups by round 3 💁🏼 Puh-lease be careful if you decide to do wall walks. They're actually pretty taxing and your shoulders will probably tire quickly…and your head is pretty important and stuff. You can definitely sub walkouts for an easier variation. I can't be the only sicko who enjoys this stuff 🙃

Katie Crewe, a 28-year-old Canadian with 110,000 Instagram followers, is popular for posting videos of her explosive push-ups and the low calorie recipes she creates. Crewe told the Observer that while she was always active, she hated going to the gym and found using weights intimidating. After moving from cardio classes to classes using weights, she began to realize getting the body she wanted would take more than light lifting. At first, she was intimidated to enter the weight room, until she realized everyone was far more focused on their own lifting than judging her.

“Building muscle as a female is very challenging and takes a lot of time and dedication,” Crewe said, debunking the myth that women who lift will somehow wake up transformed. If you’ve been ogling Jen Selter’s body or Kylie Jenner’s similarly impossible physique, lifting might be a better way to obtain a muscular build. “A lot of women want to reshape their bodies, and don’t realize they need to build some muscle and not just lose fat to achieve the look they’re going for,” she said, singing the praises of not only getting into shape, but feeling stronger.

Leg day featuring…. the one…. the only… Brody. 😂👏🏼 First clip is amazing. Those tire jumps thooo

Suzie B., who doesn’t use her last name for privacy purposes, has 240,000 Instagram followers and lives in Pittsburgh. She started working out after being inspired by her current boyfriend. “I was the normal college kid who ate whatever I wanted, and ‘working out’ [was] walking on the treadmill for about ten minutes and leaving,” she said. She admitted she was intimidated when she first started lifting, and still sometimes feels uncomfortable in a crowded gym. Both Crewe and Suzie B. choose off times to film their workouts.

Suzie believes women bulking up easily is one of the biggest myths in the fitness industry. Despite some of the more muscular women on Instagram, the only way to become Hulk-like is through performance-enhancing drugs: “If you have an image of a woman super jacked bodybuilder in your head, nine out of ten times they’re taking something to look that way,” she explained. Suzie’s Instagram account is meant to be motivational, but still realistic. “So many accounts only show their lean self, their Photoshopped self. I show videos of failing, of me being bloated, of my unripped body,” Suzie explained.

While New Yorkers might stick to their ClassPass memberships for now, it’s impossible not to consider a gym membership after seeing the pure strength women can develop when they lift weights heavier than the two pounders found in dance cardio and toning classes. Or, at the very least, it’s inspiration not to skip class. 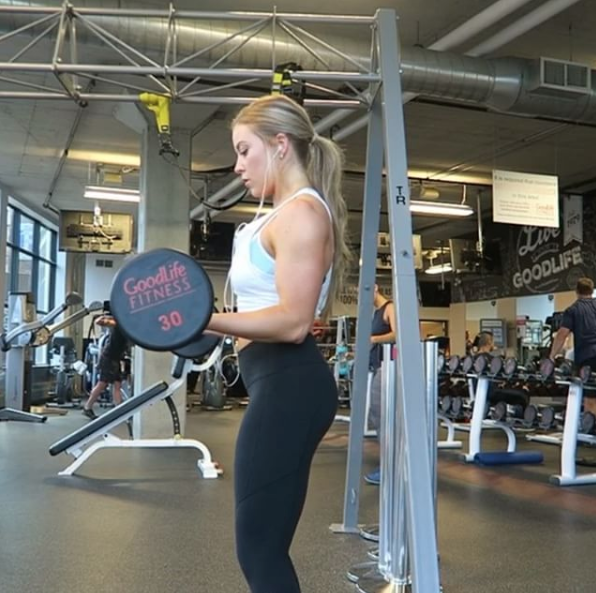