TRENTON — New Jersey lawmakers did not vote on a compromise bill to fund repairs to the state’s roads and bridges with a gas tax hike as expected Wednesday, with Senate President Steve Sweeney (D-3) announcing from the floor that the vote is now scheduled for Friday morning. The shifting tide in New Jersey’s approaching gubernatorial election and Sweeney’s chance at his party’s nomination may have played a part.

The Senate President needed 30 votes to put the bill to a vote today in an emergency session, but came up short at 28. With the that procedural stumbling block out of the way, the bill will need a 22-vote simple majority to pass on Friday.

A source familiar with the grappling behind the scenes told Observer that former U.S. ambassador Phil Murphy’s strides toward becoming the Democrats’ nominee for governor in 2017 have led some to reconsider their support for the bill in favor of waiting out Republican Governor Chris Christie’s term limit in 2018. Sweeney, Christie and Assembly Speaker Vince Prieto (D-32) announced the compromise last Friday following the NJ Transit crash in Hoboken, which is still under investigation.

With northern party organizations in all-important Bergen and Essex counties tilting toward Murphy now that his North Jersey rival Steve Fulop has bowed out and endorsed him, Sweeney is no longer a sure frontrunner in the race as the candidate of the less populous south.

Sweeney had been expected to run, but his feud with the NJEA and northern chairs’ wariness of giving his political benefactor George Norcross more influence have made the likelihood of his bid less certain. That could lead Democrats leery of voting for the current iteration of the gas tax bill to follow the plan of attack proposed by Assemblyman John Wisniewski (D-19)—borrow instead, and wait for a new governor.

Bickering between public unions and the building trades over the choice between Sweeney and Murphy has also played a part in undermining the bill’s support at the eleventh hour, the source said. Sweeney, a longtime ally of the building trades, has a target on his back from many public unions including the NJEA for his willingness to compromise with Christie on pension cuts and his decision not to post a bill to mandate quarterly pension payments earlier this year.

The plan Sweeney, Christie and a group of Senate Democrats headed by sponsor Paul Sarlo (D-36) are proposing is an amended version of Democrats’ original offer to Christie: a phase-out of the state’s estate tax with an additional cut to the sales tax to satisfy the governor’s criteria of “tax fairness” in exchange for the 23-cent per gallon increase.

Sweeney said after the brief session that some lawmakers shied away from voting for the emergency session because of the perception that a vote to move the bill would be a vote for the gas tax itself.

“Some people were convinced that a vote for the emergency [session], which has nothing to do with the vote on the Transportation Trust Fund,  was a vote for the gas tax. So you saw the votes were here to pass it,” he said. “It’s a delay of a day.

“We have to fix our roads and bridges, and we don’t have a magic wand,” he continued. “We clearly have a serious problem with our infrastructure, and that’s how roads and bridges are paid for.”

Christie had originally pushed for a one percent cut to the sales tax to offset the increase, which would fund repairs to the state’s depleted Transportation Trust Fund. The bill going to the floor Friday would cut the sales tax by roughly a third of a percent.

Sarlo placed the blame for the Trust Fund and the state’s threadbare budget with past administrations and the state’s 25-year history of taking on more and more bonded debt as pension benefits have grown. Combined, the estate tax phase-out and sales cut tax will cost the state $1.4 billion in revenue.

“They even borrowed against future generations. Even under this plan we’re not going to pay off the debt,” Sarlo said after the vote. “This generates enough revenue. Any borrowing that is done, there’s a revenue stream to pay for it.

“It’s a difficult vote,” he added. 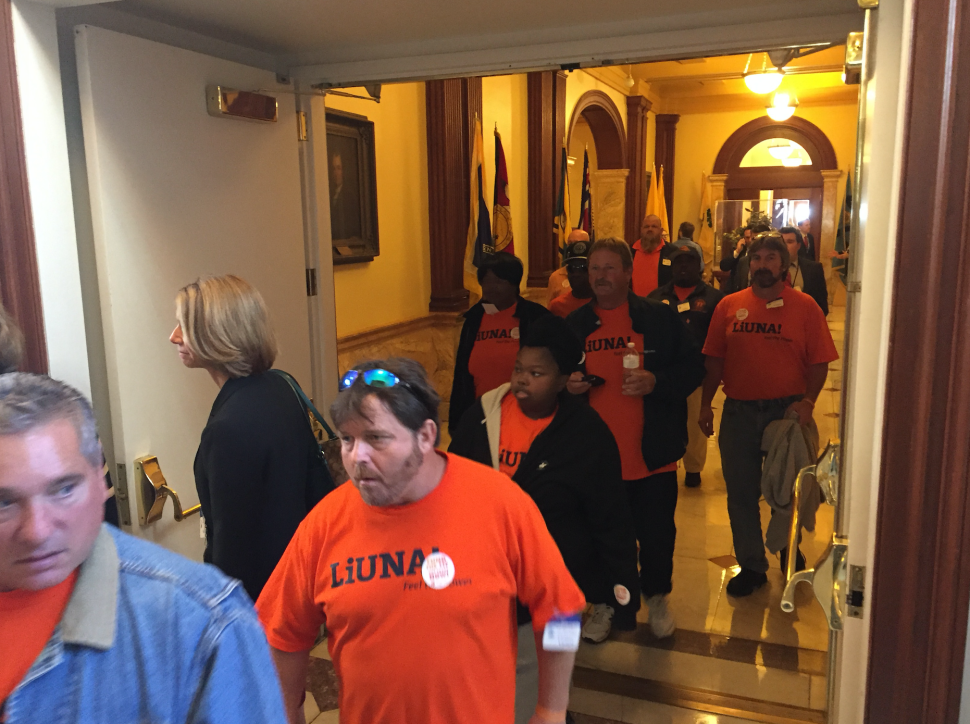