TRENTON — N.J. Transit’s recently appointed executive director was a no-show at the Assembly Judiciary Committee’s first investigative hearing Friday, citing a scheduling conflict at the last minute Thursday night. Steve Santoro, who was appointed last week, informed chairman John McKeon that he would not be testifying just hours after the lower house moved to grant the committee subpoena power as it tries to uncover the reason’s for the commuter railroad’s steep decline.

McKeon, a Democrat who has said that he does not want the investigation to simply antagonize the administration of Republican governor Chris Christie, had harsh words for Santoro and for Transportation Commissioner Richard T. Hammer, who testified in Santoro’s place.

“We are not to be trifled with,” McKeon said during the hearing. At another point when Hammer denied cherry-picking statistics on the railroad’s safety record, McKeon called those official figures “accurate, but misleading.”

N.J. Transit has had the most accidents and paid the most fines for safety violations of any commuter railroad in the country over the last five years. Its funding has shrunk by 90 percent since Christie took office in 2009, and fares have increased as ridership has grown and new safety features that could have prevented the recent train crash in Hoboken have gone by the wayside.

Assemblywoman Annette Chaparro, from Hoboken, didn’t mince words either during Hammer’s testimony, telling him “Our town is left to handle your mess.” The agency, she said, did not respond to her when she contacted them looking for information about the crash.

After the hearing, McKeon said that he was disappointed at Santoro’s absence but hopeful that he and other N.J. Transit officials will comply with a November 4 deadline to agree to testify.

“We’re going to give them a chance,” he said. “If he’s not there on the 4th or anybody we ask for, then the subpoenas will be flying.”

He said he was surprised by Hammer’s assertion that funding has not been the root of N.J. Transit’s problems.

“If it’s not a resource and money issue then to me it becomes a management issue regarding a whole array of systemic problems.”

Fares for the country’s third largest commuter rail system have gone up more than 30 percent in the last seven years. Increases in ridership have kept pace with a nearly 20 percent decline in capital spending, with $8 million in federal funding going to operations and maintenance rather than needed safety improvements like Positive Train Control brakes, a feature that could have prevented the Hoboken crash.

That accident killed one person injured more than 100 passengers. The New Jersey Sierra Club’s Jeff Tittel said after the hearing that while Hammer’s testimony is valuable, only N.J. Transit officials will be able to shed light on how the state can prevent another crash on the same scale.

“Even though the DOT Commissioner Richard Hammer was hammered with questions, he didn’t have any answers because he isn’t the head of NJ Transit,” Tittel said. “We are concerned that the legislature actually let Hammer off the hook because they didn’t ask tough questions.” 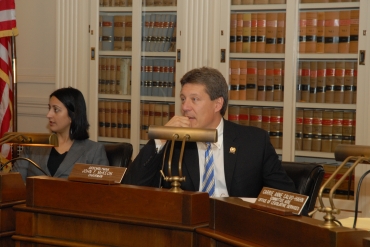