It’s hard to recall a crazier week in New Jersey politics than the one we all just lived through, amiright? But before we dive into that, let’s spare a thought for Thursday’s Hoboken commuter rail crash, a tragedy that took one life and injured hundreds while reminding us in no uncertain terms that our lack of infrastructure investment is already coming home to roost.

On top of that you’ve got the spectacular psychodrama known as Bridgegate playing out in a Newark federal courtroom. Then there’s a breathtaking gubernatorial plot-twist in Jersey City. And finally, something about our state’s long-languishing Transportation Trust Fund (TTF) that’ll further enrich multi-millionaires (!) while raising taxes on the rest of us. And since Thursday’s terrible train crash has made NJ’s brittle infrastructure front page news, let’s start there.

When I saw NJ Gov. Chris Christie and NJ Senate President Steve Sweeney amble to a podium with their solution to our region’s transportation infrastructure woes, I shuddered. Maybe you did too. It’s Pavlovian. To hear those two spin it, you’d think they cured cancer on their way to bringing NJ’s transport network into the 21st century. I wish you could see me roll my eyes right now because from here, the Christie/Sweeney plan looks like a big tax cut (for rich folks) that’s subsidized by higher prices at the pump for you and me.

I was struggling to distill my thoughts about this into an extra-spicy bouillabaisse of wit and shade when someone beat me to it!  Jim Walsh from Food & Watch offered this instinctively pleasing summary: “Christie’s rich friends get a tax cut, Sweeney’s friends in the building trades get back to work, and (Paul) Sarlo will probably get a cut somehow. The rest of us get to pay for a flawed transportation system that leaves public transit underfunded while subsidizing the auto and petroleum industry (by building more roads.”)

My advice: fill up quickly!

When word began to spread that Steve Fulop was dropping his bid to become NJ’s next Governor, my phone, predictably, blew up. It was friends and foes alike calling to get the 411. Despite rumors that I’m “up Fulop’s ass” I had no advanced knowledge of his plans nor could I confirm his reasons for doing so. I’ve heard various hypotheses, but my guess is that he didn’t see a viable path to statewide office. It’s not his time. That’s just an educated guess.

What I do know is that Phil Murphy is now the heir apparent to follow Chris Christie to become NJ’s next Governor. So Murphy should expect questions about his eye-poppingly prosperous career at the same investment bank that tanked everyone’s 401k. Or his time as ambassador to Berlin, a post he ostensibly bought much to the horror most Germans’ modest sensibilities, (including those of Chancellor Angela Merkel.) Frau Merkel, incidentally, was spied upon by the US Government during Murphy’s tenure, as especially ghastly intrusion on someone who was raised in communist East Germany.

[My advise to Phil: we ain’t mad. We ain’t mean. But you’re the odd-on favorite now and we’ve aimed accordingly. You should be fully prepared for the inevitable scrutiny that comes with your newfound frontrunner status. That includes Goldman and your time in Berlin.]

Judging from the traffic it generated, y’all loved my recent embittered BridgeGate-themed cri de coeur. Thank you. When I swore that was the last i’d write about the scandal I totally meant it. But I’m compelled to share a recent phone exchange with my Uncle David from Dallas. My uncle is gay and very, very southern. So whenever we chat, it’s usually with a twangy, gay lilt. Read the dialogue accordingly.

Uncle David: Oh before I let you go, I’ve been meaning to ask, cuz this is your neck of the woods, but are you following this whole BridgeGate fiasco? That governor if yours is a real (redacted!)

Jay: (Glances at watch) As a matter of fact I am. (Reaches for bong) This circus is on my beat! I was in the courtroom last week and wrote about it.

UD: (incredulous) Are you serious!? You were in the courtroom?!

JL: Serious as a heart attack. (lights bong) Should I send you my summary?

UD: (excitedly) OH GOD YES! I feel kinda bad for that Bridget Kelly gal though. Christie really tossed her under the bus, don’t you think? What’s Bill Baroni like?

JL: We used to be friends until I let a man came between us.

UD: (interrupts) OMG you mean to tell me that David Wildstein is your boss?!

JL: No. When he went to work for Christie, he sold the site to the NY Observer which is owned by Donald Trump’s son-in-law.

JL: Trump will be over soon. It’s still a great freelance gig, notwithstanding my proximity to all this BridgeGate rot. I swear to god, tho, when I left the courtroom last week, I was ready for a Karen Silkwood shower!

UD: (gasps!) OMG they killed Karen Silkwood!! How far do you live from the place (Pine Barrens) where Silvio whacks Adriana on Sopranos!? (pleadingly) Oh dear God, Is someone going to kill you!?

JL: I hope not, Uncle David.
FADE OUT 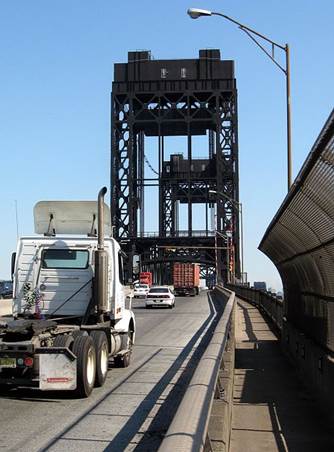