They’re showing up in mailboxes across Iowa, Colorado and host of other swing states—mailers promoting Donald Trump for president, and bearing the legend “Paid for by the New York Republican State Committee.”

The literature is the product of joint fundraising agreement involving the New York GOP and Republican committees in more than a dozen other states—16 as of August, according to documents the Observer obtained. The committees appear all to hail either from states where Queens-born businessman is projected to handily win—like Alabama, Arkansas and West Virginia—or lose, like his native state, where polls put him an average of 20 points behind Hillary Clinton.

A spokesman for Empire State Chairman Ed Cox cast the voter outreach as an act of loyalty to a favored son.

“We are pleased to play a role to help elect the Trump/Pence ticket,” said spokeswoman Jessica Proud. “New York being the home state of our presidential nominee and Chairman Cox’s stature as one of the senior chairs in the country created an ideal scenario for us to engage in a national collaborative effort with our Republican counterparts in other states through a joint fundraising agreement.”

The agreement allows the states involved to raise money for the Trump Victory Fund, the joint account the Republican National Committee and Trump campaign formed after he secured the nomination. The Trump Victory Fund then disburses cash to the state parties, either at the direction of the RNC, the candidate or the donor themselves.

The New York Republican Party has not financed any similar mailing within the boundaries of New York.

Proud said she could not disclose how much the state party has spent on these mailings, but claimed they are “just one component of our overall effort”—an effort that has included creating Trump palm cards and lawn signs to distribute within the state’s borders. She added that the mailing qualifies as volunteer work under federal guidelines, and thus falls outside the $23.8 million cap on coordinated expenditures for presidential candidates.

Federal filings for the Trump Victory Fund, which were last updated in July, do not show any disbursements to New York—though donors with Empire State addresses had contributed more than $3.6 million of the account’s $25.6 million in then-recorded donations. The most recent disclosure from the New York State Republican Party’s federal committee is also three months old, and shows no transfers in from the Trump Victory Fund.

The mail pieces appear to bear the New York State Republican Committee’s nonprofit mail permit, which one consultant described to the Observer as the “holy grail” for local candidates, as it enables them to send out literature at an enormously discounted rate.

“It’s worth millions of dollars a year to candidates around the state,” said political mail designer Gerry O’Brien, a former Republican who changed his registration after Trump secured the party’s nomination. “And we’re talking about a candidate who claims to be worth how many billions of dollars?”

Trump has insisted repeatedly he will “play” New York, which no Republican has won since President Ronald Reagan in 1984.

The GOP nominee appears to have no real campaign apparatus in his native state, even by his own skeletal standards. His state campaign co-chair, Carl Paladino—a Buffalo real estate developer who ran against Gov. Andrew Cuomo in 2010—is a longtime Cox critic who engendered controversy over the summer by telling the Observer there was “no doubt” President Barack Obama is a Muslim. 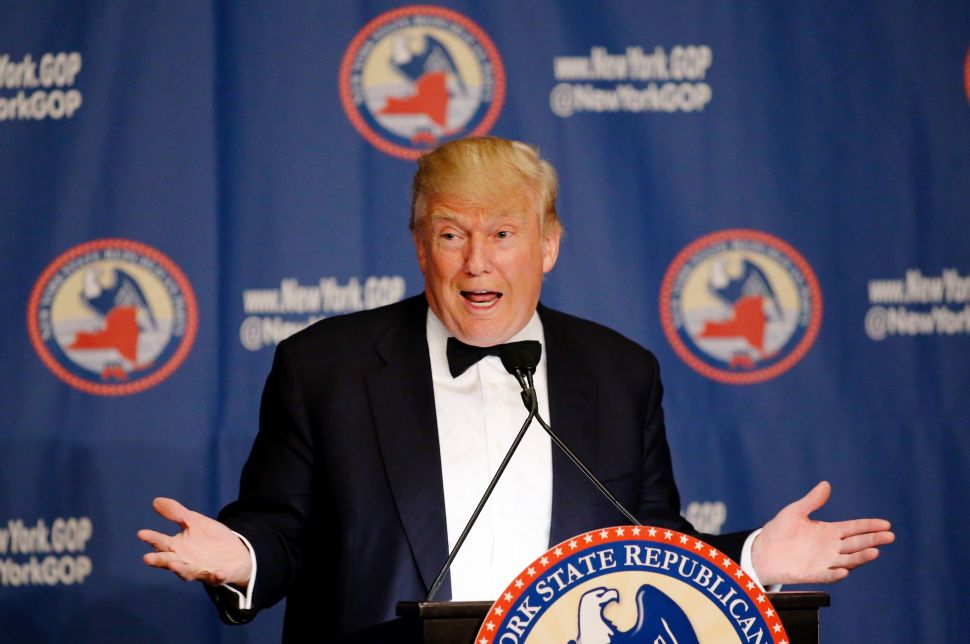