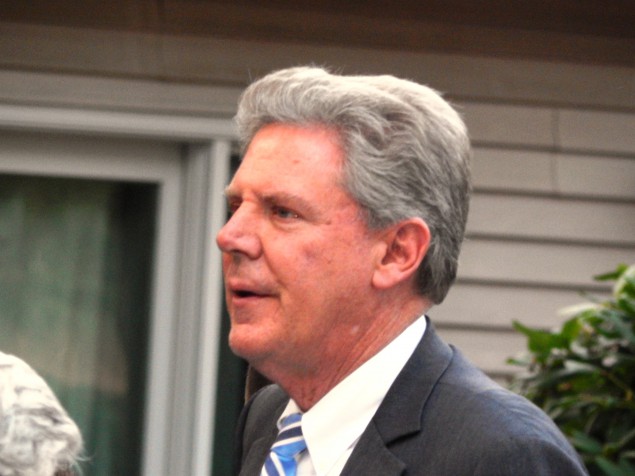 Frank Pallone, the ranking Democrat on the powerful Energy and Commerce Committee, will surely play a key role in discussions about a possible AT&T-TimeWarner merger. Max Pizarro for Observer

The biggest business story of the year—AT&T’s deal to aquire Time Warner for $85.4 billion—strikes at the heart of Observer’s sweet spot. Money, power, politics, media and technology are all at play here. But there’s also another angle, and no one seems to have mentioned it yet—New Jersey. As is so often the case, the elected officials of the Garden State can be expected to reach their serpentine fingers into this deal.

The biggest player will surely be Congressman Frank Pallone. As ranking Democrat on the House Energy and Commerce Committee, the Monmouth County congressman will undoubtedly play a huge role in what looks to be a contentious debate over the proposed merger.

News reports have detailed a conference call that took place Saturday night, in which AT&T CEO Randall Stephenson downplayed potential regulatory roadblocks by suggesting that AT&T isn’t swallowing a competitor but rather buying a supplier of content, in the kind of vertical integration that is less often blocked by regulators. The idea is that Time Warner, which owns CNN, TNT, HBO and the Warner Bros. film and tv studios, would supply the product and AT&T via its millions of cel phone subscribers and its DirecTV property, could compete with cable providers such as the market leader, Comcast. That’s a believable scenario considering that Time Warner itself was until recently in the cable business, with Time Warner cable being the second largest cable operator before it was spun off from the mother ship.

Political opposition began to line up against the deal almost immediately. Donald Trump immediately opposed the deal, saying at a rally in Gettysburg PA before the news had even been announced that he’d prevent it if elected president. He called it “a deal we will not approve in my administration because it’s too much concentration of power in the hands of too few.” The next day, Democratic vice presidential nominee Tim Kaine gave a skeptical response on NBC’s Meet The Press–a show ironically broadcast by Comcast, which also owns NBC as well as Universal Studios—saying “less concentration, I think, is generally helpful, especially in the media.”

Competitors are also sharpening their knives – and hiring lawyers. According to the Wall Street Journal, Walt Disney Co. Chief Communications Officer Zenia Mucha said over the weekend that “a transaction of this magnitude obviously warrants very close regulatory scrutiny.”

In Washington, a big fight means big money. The Center for Responsive Politics named AT&T the second-largest donor to United States political campaigns from 1990-2014 as well, with $47.7 million. And that’s just in direct political donations to candidates – it doesn’t count the many millions spent on lobbyists and lawyers.

Politico reported that “AT&T is going to spend hundreds of millions of dollars to push through this merger and will hire up an army of K Streeters with connections on key committees like Energy and Commerce, House and Senate Judiciary, to influence potential problem lawmakers and key agencies.” As the key Democrat on the committee that will oversee the laws germane to the merged entity, expect Congressman Pallone to be awash in lobbyist attention. It’s also worth considering that if Democrats were to win control of the House this November – considered unlikely but possible by recent polls—Pallone would be the Chairman of the House Energy and Commerce Committee.

First elected to Congress in 1988, Pallone has long been thought to covet a wider platform than can be provided by serving in the House minority. He floated a run for governor during Jim McGreevey’s time of troubles in 2004, briefly ran for US Senate in 2005, before ceding to the momentum that Bob Menendez had established. Then in 2013 he actually ran for Senate but got steamrolled in the primary by Cory Booker, who went on to win the seat.

According to Politico, AT&T “spent more than $11 million on lobbying” to try to get its merger with T-Mobile approved in 2011 but failed. If their strategy here is to spend more grandly, Pallone will surely be among the big winners.

In the current cycle, AT&T is already his seventh largest corporate contributor, with its PAC throwing $15,500 his way. But it’s interesting to note that his largest contributor is Comcast, which presumably will look at the proposed deal with suspicion. AT&T has lobbying giant Ogilvy Government Relations working on Pallone already, with at least four members having donated, including Gordon Taylor, who sent Pallone $2500.

With the rules in Congress about gifts from lobbyists being so strict that Congressmen literally will not use forks at a buffet lest someone accuse them of accepting a corrupt “dinner,” don’t expect to see a careful fellow like Frank Pallone suddenly driving a new Cadillac. At the same time, Pallone will be turning 65 this week and surely would still appreciate a statewide office. If the election coffers of a super-safe Congressman who has never failed to win by less than 10 points suddenly seem a little more full than they need to be, the voters of the 6th District of New Jersey can probably thank the generous people at AT&T.

Emails to Cong. Pallone’s staff were not returned as of press time; should we hear back from the Congressman, this story will be updated to include his comment.

Correction: An earlier version of this story misstated the year in which Frank Pallone was first elected to Congress.