Decades before social media and email, a remarkable but unsung Bronx housewife named Ruth Goldstock told her grandson, “Never put anything in writing that you wouldn’t want on the front page of The New York Times.”

These days, that wise advice applies to private communications by everybody in the entire country except elite journalists and news executives.

Elsewhere in America, when emails that the author assumed would never see the light of day became public he suffers some form of consequences—you know, stuff like plummeting poll numbers, possible jail time or forced resignation. This goes for everybody from Hillary Clinton and the former head of Sony Pictures on down.

But if you’re a Politico or New York Times scribe or CNBC anchor John Harwood and hacked emails emerge that reveal you outright colluding with Hillary Clinton campaign—by giving advice or providing the communications director “veto” power over what to include from your interview with the candidate or allowing campaign chair John Podesta veto power over your stories—that is another matter.

Your media friends will not censure you or even scold you—in fact, they don’t bother to contact you directly. Instead, you can hide between a crafty spokesman who won’t even answer specific questions but acts like he’s the publicist for some elusive Hollywood star and that a journalist determined to ask standard pointed questions is actually pining to profile him for Vanity Fair.

That was essentially the response from Politico spokesman Brad Dayspring when this columnist asked to interview reporter Glenn Thrush about his newly revealed emails. Dream on, he replied, emailing me: “I want to play third base for the Yankees.”

Hacked emails reveal that Thrush has apologized to campaign chairman John Podesta for writing a “shitty” story that embarrassed the operation. In another email, Thrush called himself a “hack” and promised to let Podesta approve parts of his story on the campaign’s fundraising efforts.

“No worries Because I have become a hack I will send u the whole section that pertains to u,” he wrote. “Please don’t share or tell anyone I did this Tell me if I fucked up anything.”

In multiple email exchanges, Politico spokesman Brad Dayspring, who would not even give out his own phone, did not answer a single factual question about Thrush. But did call him one of the “top political reporters in the country.”

Really? Top reporters theoretically treat both sides equally. Has he ever given Republicans advance copies of stories? If so, who?

When Daily Caller reporter Alex Pfeiffer made similar inquiries to Dayspring about Thrush he was also stonewalled. The flack proceeded to question Pfeiffer’s objectivity because he had called Thrush a “fucking joke” on Twitter. But again ignored specific questions.

Ironically, Pfeiffer’s bon mot was in response to Thrush tweeting something that illustrated his own rank bias. Thrush said that he would not have written one of his stories if he could have known it would end up helping the Trump campaign.

Dayspring followed the same game plan when it emerged in another hacked email that Politico investigative reporter Ken Vogel sent an entire draft of his story to the DNC communications director for approval.

Dayspring is good at his job. But Washington Post media blogger Erik Wemple is an even better Politico flak catcher.

Nothing in the article indicates Wemple tried to contact him directly. Instead, he just quoted Politico’s official statement verbatim.

“Politico’s policy is to not share editorial content pre-publication except as approved by editors. In this case the reporter was attempting to check some very technical language and figures involving the DNC’s joint fundraising agreement with the Clinton campaign. Checking the relevant passages for accuracy was responsible and consistent with our standards; Sharing the full piece was a mistake and not consistent with our policies. There were no substantive changes to the piece and in fact the final story was blasted out by the both RNC and the Sanders campaign, and actually prompted Politifact to revise its rating on the issue in question.”

Well, by the standard of skillful sophistry, it was “excellent.”

Notice that Politico did not even apologize. It just called Vogel’s action “a mistake.”

Reporters are supposed to accord that kind of eliding of responsibility by public officials considerable skepticism. Vogel did not make a “mistake.” And, if his action was “not consistent” with POLITICO policies, why was he not disciplined or reprimanded? Ditto for Thrush.

But the most curious thing was Politico’s insistence that even though policies were violated in reporting, the final product was excellent—objective and hard-hitting. Imagine how well a parallel rationale would fly from anybody else.

Suppose a boxing promoter busted for fixing the fight said, “Well, this guy would have won anyway, he threw better punches than Joe Frazier. It was a great fight.” Or if somebody indicted for insider trading said he would have bought the same stock anyway.

Hot shot New York Times magazine writer Mark Leibovich, himself embarrassed by a leaked email in which he told Hillary Clinton communications director Jennifer Palmieri she “could veto what you didn’t want” from his interview with the candidate and omitted at her request dicey comments about Sarah Palin, recently defended his actions. But from the safe confines of his computer.

Leibovich claimed he recently did the same kind of thing with Trump—unlike just about every politician or organizational official in Washington does—refuses to answer questions about his self-serving spin. The voice-activated phone system won’t connect callers to Leibovich—even though just about everybody else, including the bureau chief, can be reached the same way.

An actual person who subsequently answered the main phone line started interrogating a caller—where do you work? what is this about?—who asked to be connected to the great man himself.

Alas, saying more or less the following did not do the trick. “What difference does it make who I am? Maybe I work at the ape house at the National Zoo. At the very least I’m a reader, right? Isn’t the Times supposed to be accountable to readers?”

Of course, consequence free journalism extends way beyond newly-revealed emails.  In August, Washington Post scribe Janell Ross outright lied about Donald Trump—not shaded things or omitted things but outright lied—in order to depict him as some kind of crypto-racist. On the same day that Trump disavowed Duke on “Good Morning America” Ross wrote he had not done so in 48 hours, contradicting the paper’s own fact checker.

Asked to justify herself by this columnist, Ross said the claim was was merely her perspective and quickly hung up. Moral of the story: hot shot journalists don’t need to worry about anything they put in writing—privately or publicly—even when they outright lie about Donald Trump.

Ruth Goldstock was a remarkable woman. Born the same year as Richard Nixon, Gerald Ford and Rosa Parks, she had the kind of qualities—beauty, charm, intelligence—that if my grandmother’s life had taken a different course she might have ended up a significant public figure herself. But even she could not have anticipated how far down the toilet journalistic standards would eventually go.

Thrush, Vogel and Leibovich ignored multiple inquiries. But maybe their journalism peers ought to start making them. 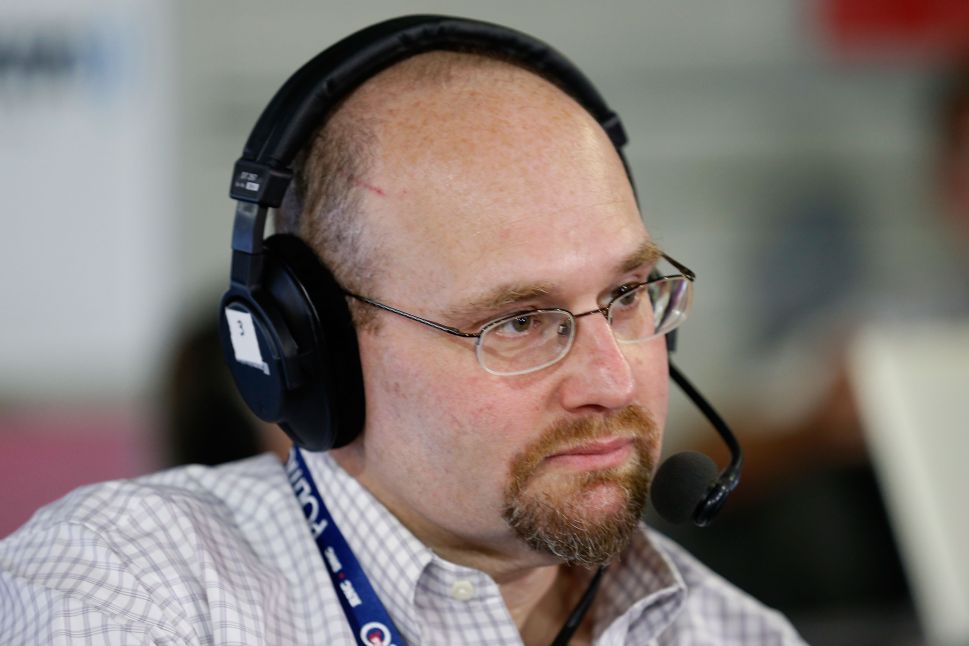