Tucked under Brooks Brothers’ Flatiron shop on the corner of Broadway & 20th St. there’s The Red Fleece Café, which opened its doors last week after several years in the making. Taking a page from the playbook of Ralph Lauren, who opened Ralph’s Coffee on the second floor of his 5th Avenue flagship store last year, the café serves as an extension of the awesomely preppy Red Fleece aesthetic first launched by Brooks Brothers in 2014 and known for its slimmer fits and younger customer. “The Red Fleece Café is an exciting step for us,” said Claudio Del Vecchio, Chairman and CEO of Brooks Brothers. “We are able to build on our relationships with our customers while offering them a new kind of Brooks Brothers’ experience.”

Here the baristas sport Repp stripe ties, the all-important (and best-selling) cotton oxford shirt, and embroidered denim aprons to serve up cups of joe using single-origin and seasonal options brewed to order on a “state-of-the-art Modbar pour-over system.” Best of all, the café’s to-go cups are inspired by the patterns used throughout the Red Fleece fall/winter 2016 collection including houndstooth, red tartan, and of course, stripes in homage to the iconic Repp tie. 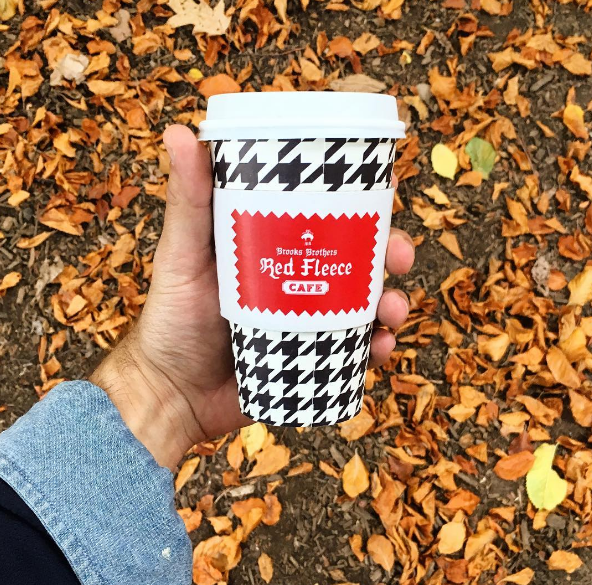