The City Council today issued an official proclamation of support to Standing Rock Sioux Chairman David Archambault II, whose reservation has battled the construction of the Dakota Access Pipeline amid fears the oil conduit could contaminate the American Indians’ holy sites and  supply.

Protesters—mainly Native Americans and environmental advocates—set fire to a bridge and tire in North Dakota today, the latest development in the six-month protest of the $3.7 billion, 1,172-mile pipeline slated to connect the Bakken and Three Forks production areas in North Dakota and Pakota, Illinois. The tube will pass close to the Standing Rock Sioux Reservation in North Dakota, crossing under the Missouri River—the reservation’s only source of .

“This is important and all struggles are linked,” Mark-Viverito told Archambault, flanked by the other Council members. “We can relate to the struggle of your people and we stand united in that because there are communities across this country and in other parts as well that are facing similar challenges.”

The Council awarded the proclamation before its monthly full-body Stated meeting—a meeting before which Council members also sang the Negro National Anthem as a show of support for African-American individuals killed at the hands of the police.

Mark-Viverito also alluded to journalists like Democracy Now host Amy Goodman, who have faced arrest while covering the protests against the pipeline. Goodman was initially charged with inciting a riot but a judge eventually concluded there wasn’t probable cause to justify the charges. Actress Shailene Woodley, who was among the protesters, was also apprehended and charged with criminal trespassing and engaging in a riot.

“Independent media has also been really diligent in covering this issue,” Mark-Viverito said. “They’ve been suffering in terms of their First Amendment rights as well, the freedom of being able to report on this issue, some being threatened with imprisonment.”

In September, U.S. President Barack Obama ordered a temporary halt to construction, but work resumed earlier this month.  The pipeline, whose developer is Energy Transfer Partners, is anticipated to be ready for operation by the end of the year.

Archambault II wrote a letter dated Oct. 24 to U.S. Attorney General Loretta Lynch asking the U.S. Department of Justice to investigate excessive use of force by both state and law enforcement officials against protesters. Last month, he appealed to the United Nations Human Rights Council for support at their meeting in Geneva, Switzerland.

“This is a challenge for us and we feel like there’s nothing that we can do but knowing that there are people that are putting their support behind us is encouraging and it keeps us moving forward in this fight,” he said. “This whole fight is about . To us, is sacred.”

He said that it takes courage to stand up for the pipeline against oil and other industries, the federal government and the state government.

“Once you have cities like this city of New York standing up and saying we support you, we take the next step,” Archambault II continued.

The protests come after the revelation just a day ago that Republican presidential nominee Donald Trump invested in Energy Transfer Partners and that Kelcy Warren, the company’s CEO, donated more than $100,000 to his campaign. 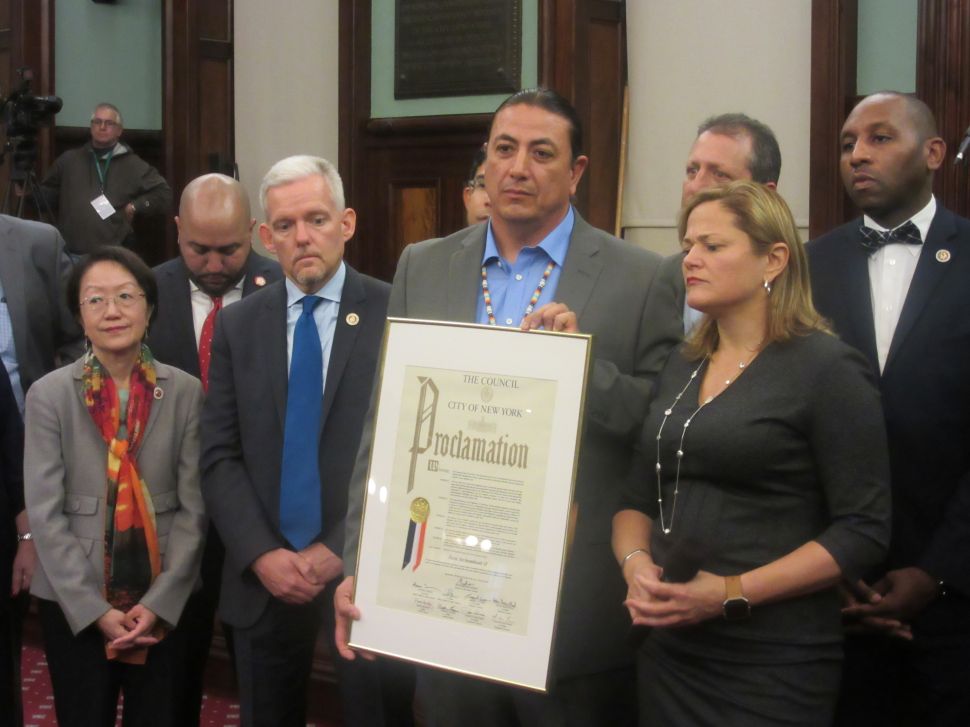