As I told you on Friday, the Kremlin’s deployment of Iskander missiles, what NATO calls SS-26s, into Kaliningrad is a direct challenge to the Atlantic Alliance, since it puts all of Poland and the Baltic republics into range for a sudden nuclear strike. An Iskander’s flight time from Kaliningrad to Warsaw is just two minutes, so NATO would functionally have no warning.

In military terms, this is a game-changer for the Baltic region. Politically, it’s deeply destabilizing too. It’s nothing less than a regional version of the Cuban Missile Crisis, with Moscow placing nuclear missiles close to the Western camp for strategic advantage. Why Putin would do this when Obama has just three months left in the White House is the key question—and answering it reveals disturbing truths. As I said on Friday:

This constitutes a direct challenge to Washington by Moscow—and by Vladimir Putin to Barack Obama, personally. The KGB officer in the Kremlin is seeking to get in one last, grand strategic humiliation for our president before he leaves office. And why not? Such reckless antics have worked well for the Russians so far, given Obama’s preference to avert eyes and hope for the best whenever Moscow misbehaves.

The Kremlin’s no longer hiding its actions, even when they are profoundly destabilizing to European security. Knowing that President Obama will do nothing, Moscow is now openly boasting of its Iskander gambit. Stating the move is “no secret” and just part of military drills, Kremlin media isn’t shying away from the story.

A Russian defense ministry spokesman on Saturday indicated that they want the Americans to know about this aggressive chess move. “Nobody made a big secret out of the transportation of the system onboard the freighter Ambal,” stated General Igor Konashenkov, who added that one of the Iskander-M systems had been left exposed on the freighter’s deck “on purpose” when the Russians knew an American spy satellite would be flying overhead.

We are in a dangerous period between now and January 20, when the Russian bear feels—not unreasonably—he can get away with whatever he wants, without consequence.

Even for the honeybadger in the Kremlin, this is a brazen act, although officially Russia has portrayed its Iskander deployment to Kaliningrad as no big deal. Frants Klintsevich, one of the Kremlin’s top security officials (he was the person who publicly admitted in June that Edward Snowden is an agent of Russian intelligence), downplayed the whole thing. Neighboring states like Poland and Lithuania “should not fear” the move because it is “part of a drill” for the Russian military which, Klintsevich added, are “not at war” with anyone.

Warsaw and Vilnius, who know their eastern neighbor very well, are not reassured by such Russian pleasantries about their aggressive move on NATO’s doorstep. “The deployment not only increases tensions in the region, but also possibly violates international treaties which limit deployment of ballistic missiles,” explained Linas Linkevičius, Lithuania’s foreign minister. “We will use all channels available to not only raise this question, but to demand that international agreements are adhered to,” he added.

Poland’s defense minister, Antoni Macierewicz, was equally forthright in his statement regarding the Iskander deployment on his country’s border: “The Russian Federation’s recent actions give cause for utmost concern.” In private, Polish defense officials have expressed real worries, rejecting Kremlin excuses that this move is “just a drill.”

“Putin’s playing for real now,” explained a senior defense official in Warsaw, who indicated that his country’s military and intelligence moves in response to Putin’s Iskander gambit are “appropriate to the new situation.” The problem in Warsaw isn’t just Putin, whose bad behavior Poles now see as part of NATO’s “new normal” on the Alliance’s eastern flank—but President Obama, who is a no-show in this hour of crisis.

Indeed, four days into Putin’s Cuban Missile Crisis on the Baltic Sea, our president remains invisible. There has been no public statement on the Iskander deployment from either the White House or the Pentagon. The U.S. military has made some quiet moves in response to the Russian move, including flights by our spy planes over the Baltic to monitor Kremlin moves. However, the lack of any public support or demonstrations of NATO solidarity by Washington right now is deeply troubling to our allies in Eastern Europe, most of whom had minimal confidence in Obama’s courage even before his latest no-show.

Vladimir Putin is no madman, rather an opportunist. He will get away with what NATO and especially the United States—who in military terms are vastly more powerful than Russia—allow him to. Barack Obama seems to think that letting the Kremlin do whatever it wishes will bring peace and stability. Ukraine and Syria tragically demonstrate that Obama’s laissez-faire attitude towards Putin beings anything but peace, yet it seems highly unlikely that our president will grow a backbone with just three months left in office.

We are in a dangerous period between now and January 20, when the Russian bear feels—not unreasonably—that he can get away with whatever he wants, without consequence. That’s not true, of course. Privately, President Obama has expressed to our NATO allies facing Russia exactly where his “redlines” are vis-à-vis the Kremlin.

Our allies, however, scarcely believe Obama, and who can blame them? “We saw what happened with his ‘redline’ in Syria,” quipped a NATO senior official: “Putin won.” We can only hope that the Kremlin believes in Obama’s Eastern European “redlines” more than defense professionals in Poland and the Baltics do. Deterrence works, but only when it’s credible—on all sides. President Obama needs to get off the golf course—where he is today—and publicly reassure our NATO allies if we expect to prevent more of Putin’s dangerous antics.

Nuclear weapons have now entered Putin’s cat-and-mouse game that his Kremlin is waging for political control over Eastern Europe. Moscow’s Iskander dice-roll has opened up a new, dangerous phase of this potentially lethal match. News today that the mayor of St. Petersburg, Putin’s hometown, has approved bread rations in the event of war give a worrying indication of the Russian mindset right now. January 20 cannot get here soon enough. 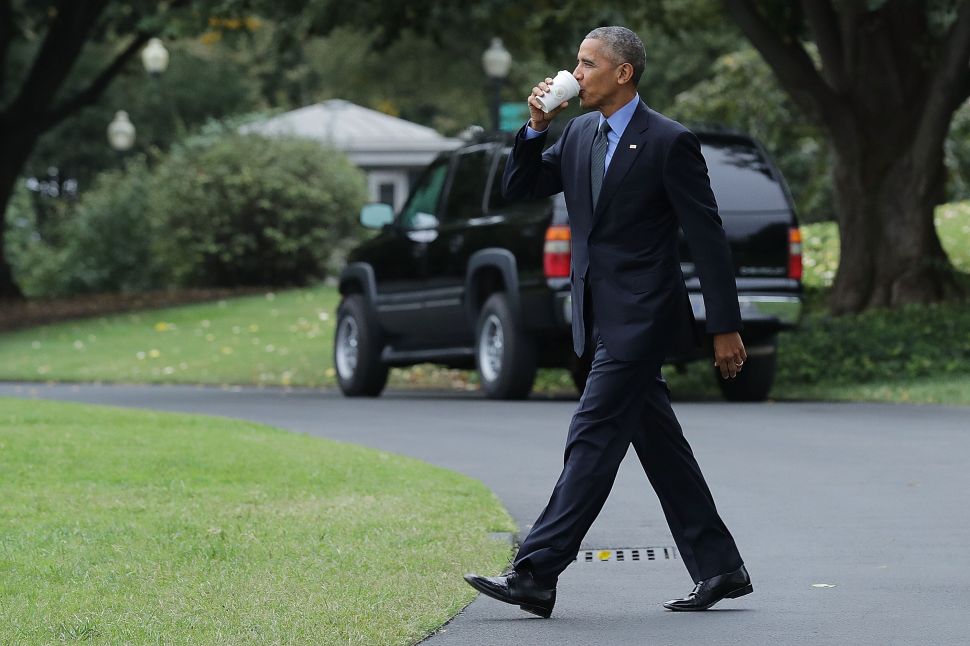