Normalization of relations with Fidel Castro’s Cuba has been one of the big foreign policy initiatives of Barack Obama’s presidency. During his two terms in the White House, Washington has overturned more than a half-century’s worth of American policies toward the Communist regime in Havana.

Calling that legacy a “failed approach,” Obama’s outreach to Havana, particularly in his second term, has been pronounced, including a visit by the president and the first lady to Cuba. By the time he leaves office in three months, Obama will have substantially re-normalized relations with the Castro regime.

Obama has pressed forward over the opposition of many Cuban-Americans and human rights groups, who note that Washington’s gifts to Havana have not been reciprocated with greater respect for democracy and the rule of law in Cuba, as many had anticipated. In the words of Amnesty International, “Despite increasingly open diplomatic relations, severe restrictions on freedoms of expression, association and movement continued. Thousands of cases of harassment of government critics and arbitrary arrests and detentions were reported.”

Obama seems unperturbed by all this, and today he issued revised guidance for the U.S. Government in its re-normalized dealings with Havana. Presidential Policy Directive 43 is likely to be this president’s last push on Cuban matters, and its call to Congress to drop the Cold War-legacy embargo on the Castro regime seems like to fall on deaf ears.

Most of PDD-43’s guidance won’t impact average Americans, unless they happen to travel to Cuba. Obama has now permitted them to bring back as much Cuban rum and cigars as they like—something Americans were last able to do when Dwight Eisenhower was in the White House.

There’s the usual Obama boilerplate about promoting democracy and human rights in Cuba, though there’s nothing in PDD-43 that seems likely to make any impression on Havana. The document omits the word “Communist” entirely. Cubans expecting this president to demand concessions from the Castro regime in exchange for trade favors and diplomatic recognition have been let down yet again by Barack Obama.

Obama has unilaterally declared a truce in our half-century SpyWar with Cuba, but there’s no indication Havana has done the same.

Some of PDD-43’s guidance will have important national security implications. It directs the Defense Department to expand its relationship with Havana, especially in “humanitarian assistance, disaster relief, and counternarcotics in the Caribbean.” It further orders the Pentagon to “support Cuba’s inclusion in the inter-American defense system…which will give Cuba a stake in hemispheric stability.”

It’s far from clear that Havana’s Communist rulers—whose entire worldview for more than a half-century has been based on resistance to Yankee hegemony—actually want to be part of any American-led defense apparatus in our hemisphere, but the Pentagon follows orders, so we can expect the U.S. military to have more meetings and conferences with Cuban counterparts at the table.

Perhaps the most curious aspect of PDD-43 is what it tells our Intelligence Community to do. Obama has ordered American spies “to find opportunities for engagement on areas of common interest through which we could exchange information on mutual threats with Cuban counterparts.”

That wording is intentionally vague, as spies like it, and it’s not clear if anything will come of it, beyond low-level information sharing. Nevertheless, it’s apparent that Obama is declaring a truce in the SpyWar that’s raged between Washington and Havana since the early 1960s. In PPD-43, the White House has omitted important facts about the intelligence relationship between the United States and Cuba—namely how hostile it has been for more than 50 years.

For Havana, America possesses the only two existential threats to their Communist system: the U.S. military, which outclasses Cuba’s armed forces a hundredfold, and the Cuban exile community, which Havana has long considered a regime-change cadre in waiting. Cuba therefore has spied intensely on America practically from the moment Fidel Castro took power in 1959.

It needs to be said that Cuban espionage against the United States has been impressive. Well trained by the Russians in spycraft, Havana’s intelligence services have consistently beaten Americans in the SpyWar, displaying a discipline and seriousness that the regime lacks in other areas.

Although it’s practically unknown to the American public, Cuba has consistently ranked among the Big Four counterintelligence threats to our government (the others are Russia, China and Israel, in case you wondered). Havana punches well above its weight in espionage and poses a real threat to our national security—not least because the secrets it steals from us with depressing ease don’t always stay in Havana. Perennially short of cash and lacking much of a legitimate export economy, the Castro regime has a well-developed habit of selling purloined American information to third countries such as Russia, China and Iran.

Just how badly we’ve been beaten by Cuban spies is something Americans should know. Our spy operations inside Cuba have been a bust from Day One. It was bad news for our Intelligence Community in 1987 when the highest-ranking Cuban intelligence defector to ever come to our side revealed that every single agent run by the Central Intelligence Agency since Castro came to power was actually fake. Some four dozen sources in all, they had all been detected by Cuban counterintelligence and turned into double agents for Havana.

This spy debacle, which revealed that the CIA had been decisively outfoxed by Havana, made too little impression on Congress or the public. Needed Intelligence Community reforms did not follow. Neither is there any indication that things have gotten much better for the CIA in the SpyWar against Cuba since 1987.

Even worse is the fact that Cuban intelligence has consistently managed to beat our counterspies inside the United States, too. Lacking much of a diplomatic presence in this country, Cuba for decades has nevertheless done an impressive job of recruiting and running agents on American soil, right under the noses of the Federal Bureau of Investigation.

Havana’s secret tentacles extend deep into the émigré community and its Miami base. There’s really nothing happing in the Cuban-American world that the Castro regime isn’t aware of, and Havana has never lacked for volunteers eager to spy on fellow Cubans. The only limit to Cuban intelligence penetration of the émigré community, explained a top Cuban intelligence defector to me, is the limited number of case officers that Havana can infiltrate into the United States. There were always more willing volunteers than Cuba could handle.

Indeed, Havana’s penetration of émigré ranks is so deep and pervasive that it can sometimes be difficult to determine what’s really going on. Cuban agent provocateurs are plentiful in Miami, and it can be safely assumed that a significant percentage of the craziest-sounding exiles—the ones agitating for violence and extremism—are really working for Havana to discredit the Cuban-American community.

The so-called Wasp Network, consisting of five Cuban intelligence officers and their many agents, which the FBI rolled up in 1998, stretched deep into the Cuban émigré community in Florida. The Cubans had even orchestrated the deaths of four anti-Castro activists in a notorious 1996 incident. However, the Wasp Network had also penetrated U.S. military installations in Florida, including U.S. Southern Command in Miami, which is the Pentagon’s headquarters for most of its Latin American operations.

Havana has consistently been able to recruit agents inside the Pentagon and our Intelligence Community. The remarkable case of Ana Belén Montes, a Defense Intelligence Agency senior analyst who spied for Cuba her entire Pentagon career, caused less public waves than it merited, in part because she was arrested just 10 days after the 9/11 attacks, when media attention was elsewhere.

However, Montes did enormous damage to the Defense Department and our spy agencies, since she was actively stealing secrets to pass to the Cubans for more than 15 years. She was recruited by Castro’s spy services when she was a graduate student in Washington, and underwent espionage training in Cuba before she joined DIA. In fact, her Cuban handlers told her to get a job inside American intelligence, and Montes faithfully complied.

She was unmasked thanks to diligent counterintelligence analysis by several of our spy agencies, over years, and we learned from the Montes case that she was only one of several Cuban moles lurking inside the Beltway. One of those spies was caught in 2009. That was Kendall Myers, a retired State Department analyst, who spied for Havana for three decades, with his wife’s assistance. His motivation, like Montes, was ideological, not financial: Myers had a serious man-crush on Fidel Castro.

Other Cuban moles remain undetected. One may have been Alberto Coll, who left the Naval War College in 2005, where he was a dean, under a cloud. Coll, a former Pentagon senior official, was caught lying on official forms. A Cuban émigré who came to the United States as a child, Coll had taken trips to Cuba that he failed to tell security personnel about, while he had friendships with Cuban spies he likewise did not disclose, as he was required to. Coll was never charged with espionage, but many Washington counterspies think his ties to Havana went deeper than has ever been publicly revealed.

American counterintelligence hands who know the Cubans best have no doubt that some of those moles remain active in and around Washington. What’s worse is that President Obama has now opened the door to increased Cuban espionage against our country. Soon Cuba will have brand-new diplomatic missions all over the United States and, per standard practice, they will all contain a hefty number of spies posing as diplomats.

Given how successful Havana has been at conducting espionage against us, on our own soil, without such large embassies and consulates, there’s every reason to expect Cuban spying to get more aggressive—and effective—in the near future. President Obama has unilaterally declared a truce in our half-century SpyWar with Cuba, but there’s no indication Havana has done the same. 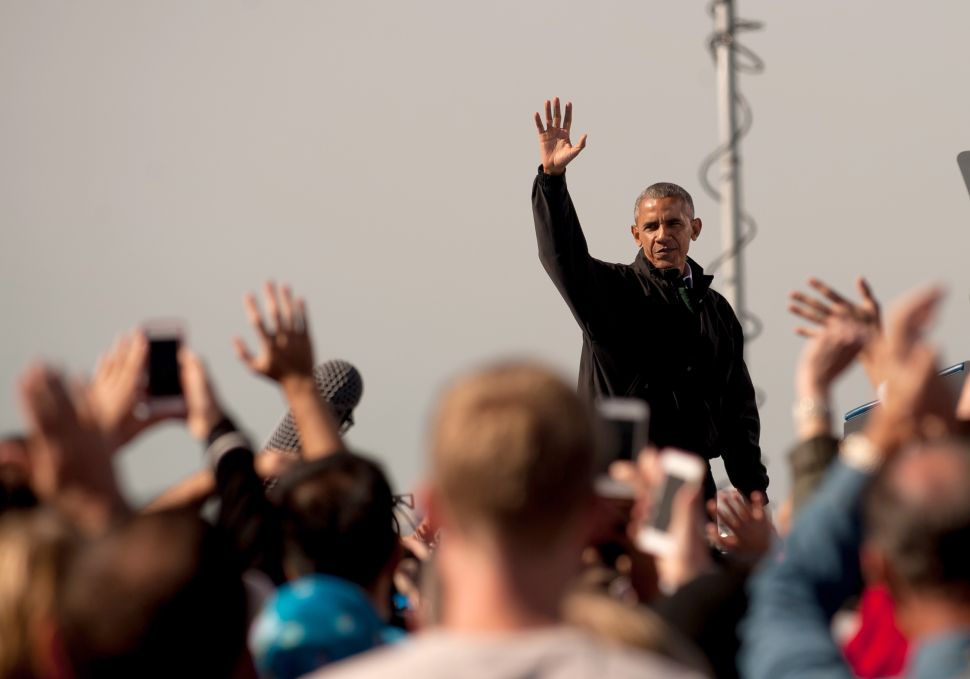