The City Council opened its stated meeting Thursday with parallel protests over recent police killings of African-Americans, protests that sharply illustrated the different styles of a pair of black lawmakers from Brooklyn, both of whom insiders say aspire to lead the body after next year.

For the fourth time in two months—and just nine days after NYPD Sergeant Hugh Barry fatally shot the mentally-ill, 66-year-old Deborah Danner in the Bronx—Councilman Jumaane Williams sat through the Pledge of Allegiance, in deliberate echo of the controversial stance struck by San Francisco 49ers quarterback Colin Kaepernick during the national anthem before football games. Staying seated with him were Councilwoman Inez Barron of Brooklyn and visiting St. Louis City Alderman Antonio French, who vaulted to national prominence amid 2014’s protests over the killing of black teen Michael Brown in Ferguson.

Afterward, almost the entire 48-member Democratic delegation stood and joined Brooklyn Councilman Robert Cornegy in intoning “Lift Every Voice and Sing,” a rousing spiritual that the National Association for the Advancement of Colored People christened the “Negro National Anthem” in 1920, and which served as soundtrack to the 20th century Civil Rights Movement. The only Democrat who did not participate was Brooklyn Councilman Stephen Levin, who had stepped out of the room, and who read lyricist James Weldon Johnson’s words in their entirety when he returned.

The juxtaposition of the two acts was striking, in part because Cornegy—who represents the historically African-American enclave of Bedford-Stuyvesant—appeared to expressly frame his demonstration in contrast to Williams’ in an interview earlier this week.

“In Bed-Stuy we don’t take a seat for anything, we take a stand for something,” he told the blog Kings County Politics.

Sources the Observer spoke to saw the comments as an effort by Cornegy to impress moderate members of the Council—and to use Williams, who has struggled to get more of his colleagues to join in his genuflection, as a foil. (Williams convinced seven of his peers to remain seated with him in September, but strangely only Barron showed the same tenacity this month). Both Democrats are weighing a bid to replace term-limited Speaker Melissa Mark-Viverito after the 2017 elections, meaning both will need to convince city political leaders and their fellow legislators to align behind them.

Both men denied any ill will toward each other when they spoke to the Observer Thursday afternoon. But their differing approaches to the seminal issue of police reform exemplify their divergent political personas, and give a preview of how they might attempt to rally support for their candidacy in a battle for the speakership.

Williams, who hails from the largely Caribbean-American community of East Flatbush, has emerged as one of the city’s most visible left-leaning officials in the seven years since he first won his seat. A co-founder of the now-dominant Progressive Caucus, he became a regular face at Occupy Wall Street and Black Lives Matter protests, and commandeered headlines as a bitter critic of former Mayor Michael Bloomberg’s policing policies and of Gov. Andrew Cuomo’s handling of the city’s rent laws.

He shocked observers twice in 2013—first by shouting out in protest during Bloomberg’s final State of the City address in February, then by suddenly diving into the pool of candidates for Council speaker following the November election, even though the Progressive Caucus had already coalesced around Mark-Viverito. His bid ultimately proved short-lived.

Ahead of New York’s presidential primary this April, he announced in front of a thousands-strong crowd in Prospect Park that he was backing Vermont Sen. Bernie Sanders for the White House. In his speech, Williams mocked the Daily News’s assertion that the self-described democratic socialist was “at war with reality.”

“Too many people’s reality is struggle. And maybe if you’re not at war with reality, you’re not focused enough,” he said to cheers from the millenial-heavy audience. “The people who say ‘it cannot be done,’ please move out of the way of the people who are doing!”

Cornegy, who towers over his colleagues at six-foot-ten, has by contrast been a largely unobtrusive presence at City Hall since his election in 2013. Serving as chairman of the Committee on Small Business, the former pro basketball player’s most outspoken moments have come in defense of charter schools, and in warning that the city’s aggressively progressive direction might debilitate mom-and-pop entrepreneurs.

“The onset of [increased worker benefits] in anything except increments causes a great burden to small businesses,” Cornegy warned in a hearing on raising the minimum wage in 2014. “If we increase wages, the ability to hire decreases, then it sets this whole city in another direction.”

But since his ascension to the co-chairmanship of the Black, Latino and Asian Caucus earlier this year, Cornegy has grown more candid on race and law enforcement issues. He recently objected to the city’s chosen contractor for the NYPD’s body camera program. And just two weeks ago he penned a letter with Bronx Councilman Ritchie Torres, the other BLAC co-chair, calling on the New York City Housing Authority to strip the names of slaveholders off eight of its developments.

“On behalf of the Black, Latino and Asian Caucus, I would like to thank you for joining us to salute the Black National Anthem alongside the U.S. Pledge of Allegiance,” he said to the Council after the hymn finished. “We are proud to stand here with you all, to affirm the dignity and the protection of all communities in America.”

It was a theme Cornegy pursued in an interview with the Observer.

“This was a unifying act that allows the entire body to participate,” he said, alluding to the universal literary themes in the song’s lyrics. “It talks about liberty and freedom and justice—all tenets that are American, not African-American, so actually giving the entire body the opportunity to partake in something that’s really an American standard.”

The councilman insisted that he supported Williams—a member of the BLAC—in his protest, but argued leading the Council in “Lift Every Voice and Sing” allowed and encouraged white Council members to get involved. He seemed to acknowledge he and his fellow Brooklynite might both seek the highest post in the Council in the near future, even as he denied his demonstration was an effort to promote his candidacy.

“I think anybody who says, in a dynamic body like this, they would not like to assume leadership, is being disingenuous,” he said. “I think we all have a particular degree of acumen, and would love to be able to have, you know, from our various vantage points, the opportunity to lead this body.”

Williams also shied away from the suggestion of a rivalry between his protest and Cornegy’s. He described the harmonizing over the Negro National Anthem, which he participated in, as “powerful.”

“No matter what you do, everyone says you should be doing something different,” he continued.

At this point, a Williams bid for the speakership would count on the Council continuing along the same leftward trajectory it set out on in 2013. But the Progressive Caucus may shed seats in the next election, and several of its members besides Williams—Queens Councilwoman Julissa Ferreras-Copeland and Manhattan Councilmen Mark Levine and Corey Johnson, and possibly others—are openly eyeing Mark-Viverito’s perch.

So moderate Democrats, particularly those aligned with the Bronx and Queens county machines, may well dominate the next Council. And it appears Cornegy is preparing for that scenario. 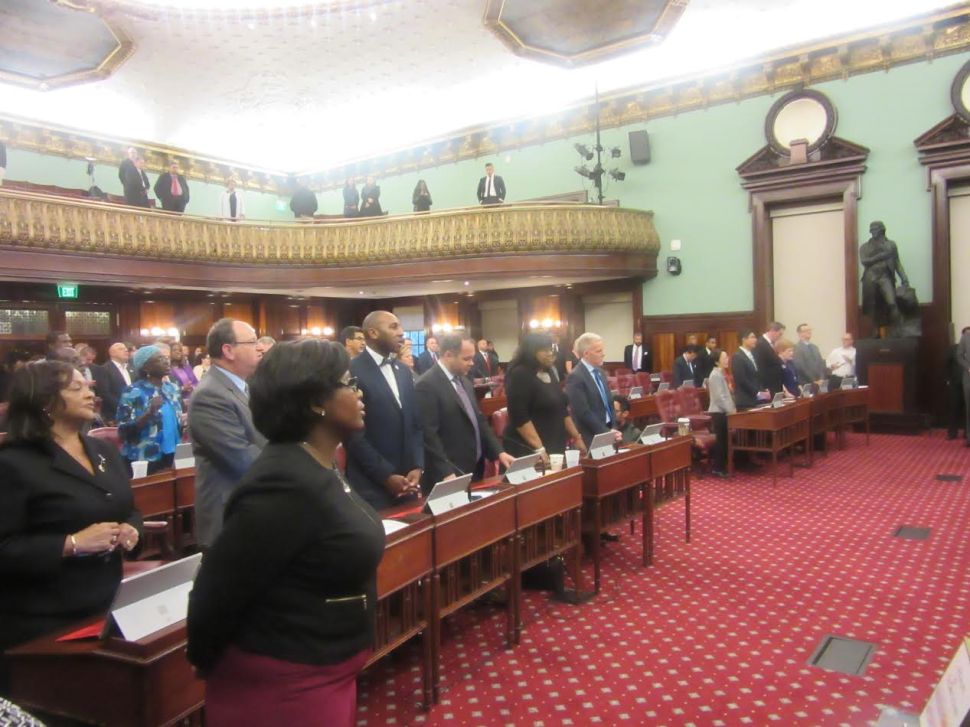