Today, President Obama is hosting the first-ever White House Frontiers Conference in Pittsburgh, Pennsylvania to promote advancements across the “Personal, Local, National, Global, and Interplanetary Frontiers.” The President will set ambitious goals for the next 50 years in hopes that the American people will be inspired and strive to accomplish them.

According to a pre-release from the White House, one of the President’s goals to be discussed in Pittsburgh today will involve expanding human presence throughout the solar system. He hopes that with the leadership of NASA and their private industry partners, humanity can achieve this by pushing innovation and harnessing the spirit of exploration.

Making good on his CNN op-ed published earlier this week, the President will enable NASA to send humans to Mars by the 2030’s by allowing them to focus on deep space exploration while private companies take over operations in low-Earth orbit or specifically, the International Space Station. The President will highlight the commercial contracts already in place for SpaceX to ferry astronauts to the ISS with their upcoming Crew Dragon vehicle and for Boeing to do the same with the CST-100 Starliner spacecraft. Dragon is on display at the conference while a Starliner simulator will be available for participants.

The Obama administration has directed NASA to start working with the commercial space industry to also develop deep space habitats which could safely house astronauts during the long trip to Mars and other destinations. “The idea is that these habitats or “habs” would evolve into spacecraft capable of sustaining and transporting astronauts on long duration deep space missions, like a mission to Mars,” said a joint statement from NASA Administrator Charles Bolden and John P. Holdren, Director of the Office of Science and Technology Policy. “Their development would be achieved through new public-private partnerships designed to build on and support the progress of the growing commercial space sector in Earth orbit.”

In order to achieve the ambitious goal of a fully space-faring future, the Next Space Technologies for Exploration Partnerships or “NextSTEP” program was created to foster the development of the technologies to accomplish what will be the most scientifically complex endeavor ever attempted by mankind. Six companies have received awards to start developing potential habitation systems along with life support and propulsion concepts to protect humans during interplanetary travel. The list includes Sierra Nevada Corporation, Boeing, Orbital ATK, NanoRacks and two companies who are leading the pack with their progress in hardware development, Lockheed Martin and Bigelow Aerospace.

Veteran spacecraft manufacturer Lockheed Martin is already a few years into development of the Orion spacecraft—the vehicle that NASA will use to propel humans to deep space atop the agency’s upcoming heavy lift rocket, the Space Launch System. While Lockheed has been conceptualizing a multi-purpose logistics module for NextSTEP to initially orbit the moon, they seem to be resetting that plan to build what they are calling a “Mars Base Camp” that will help establish a human presence in Martian orbit and get us there faster than NASA’s current plans to land on the surface.

“At Lockheed Martin, we’ve been a part of every NASA mission to Mars for the past 4 decades and we stand ready to support the nation’s goal of making the next giant leap of sending humans there and bringing them safely home. Working in partnership with NASA, we’ve developed, built and flown the Orion spacecraft — the only crewed spacecraft built to withstand the punishing journey to other planets,” said Lockheed Martin Vice President Lisa Callahan in a statement to the Observer. “We’re also advancing deep space habitat designs and mapping out a Mars mission concept, called Mars Base Camp, that suggests a technological roadmap for achieving the first human mission at Mars.”

As part of the administration and NASA’s push for the eventual commercial takeover of the space station, they will move forward with the plan to offer private companies docking capabilities and the resources to operate in low-Earth orbit. One of those firms is Bigelow Aerospace, a Las Vegas-based expandable habitat developer that already has their BEAM module attached to the International Space Station for testing. The experimental Bigelow Expandable Activity Module (BEAM) is connected to the Tranquility node of the ISS and its testing could lead to future versions being used as extra work or living space for astronauts.

For the NextSTEP program, Bigelow is developing an accessible 330 cubic meter expandable habitat module to house a human crew. XBASE or Expandable Bigelow Advanced Station Enhancement as it’s called, would be able to dock with the International Space Station and provide a wealth of space for routine operations as well as mission-specific tasks. The XBASE’s development will be based on the current testing of the BEAM which includes performance reactions to temperature fluctuations, space radiation, and debris impact. Bigelow Aerospace hopes their expandable concepts will lead to the development of habitat spacecraft that will orbit the moon and one day, Mars.

“We have submitted a version of a deep space habitat that we call EMMT—Earth Moon Mars Transporter and it can be various sizes and the particular presentation we were given were constrained. We had to shape this spacecraft to a size that would initially fit as a secondary payload under the Orion on a Space Launch System. We really had to shrink it down but these are terrific transporters,” said Bigelow Aerospace founder and president Robert Bigelow in a previous interview with the Observer. “Our philosophy is try to test everything we can. First, close to home because we don’t want any suicide missions. The moon is a perfect testing ground for a really dangerous environment and If you can successfully do a lot of things there, you can learn a lot that would be valuable to bases and human habitats on Mars.”

Apart from NASA and their private industry partners that are all developing Mars mission-related capabilities, SpaceX has their own plan for not only reaching the red planet but building a permanent, self-sustaining city on our neighboring world. At the 67th annual International Astronautical Congress in Guadalajara two weeks ago, CEO Elon Musk unveiled the company’s Interplanetary Transport System which can carry 100 or more colonists to Mars to establish a permanent settlement. The 400 foot tall rocket will be the largest ever built and will launch a 55 feet wide reusable spacecraft from Kennedy Space Center for a trip that could last up to 150 days. SpaceX hopes to launch the maiden voyage in a decade to construct a fuel processing facility on Mars that will enable return flights and slash the costs of interplanetary travel.

It’s not clear how SpaceX’s bold mission will coincide with NASA’s plan to launch the Orion crew module atop the Space Launch System to Mars but the company has left the door open for government and industry cooperation. “SpaceX was founded with the ultimate goal of helping make humans a multi-planetary species. As Elon said at his recent talk, it will take a combination of public and private efforts to build a self-sustaining city on Mars,” said a SpaceX spokesperson to the Observer. “It’s exciting to see President Obama advocate for the next frontier in human spaceflight, and we look forward to participating in the journey.” 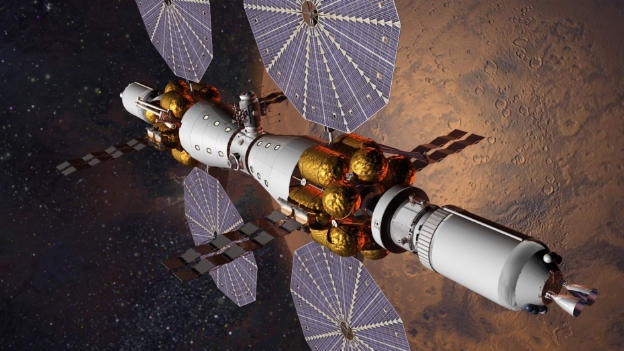