It’s long been obvious that Vladimir Putin and his inner circle view Barack Obama with utter contempt. To the hard men in Moscow, who got their schooling in the KGB, our diffident, wordy Ivy League lawyer president is a weakling—almost a caricature of everything they despise about the postmodern West.

Here the Kremlin mirrors most Russians, who find Obama a puzzling and contemptible man. This is nothing new. I’ve heard remarkable put-downs of our commander-in-chief for years, going back to 2008, even from the mouths of highly educated Russians. Their comments are invariably earthy, insulting, and nowhere near politically correct.

It’s therefore no surprise that Russians view Obama with contempt—and so does their leader. As our president winds up his second term and prepares to move out of the White House, the Kremlin simply isn’t bothering to hide that contempt any longer, even in high-level diplomacy, where a modicum of tact is expected.

Take Syria, the foreign policy nightmare that hangs darkly over Obama’s legacy. The pathetic attempts of John Kerry, Obama’s sad-sack secretary of state, to assert America’s role in that sordid conflict have been rudely rebuffed by Moscow. The Kremlin has made it indelibly clear that it has no interest in further parley with Washington about Syria: We won, you lost, get over it.

This has now descended into farce, with Russia’s foreign ministry tweeting mocking insults at America’s top diplomat. Like the infamous honey badger, the Kremlin simply doesn’t care one whit what we think. We can at least count our blessings that Secretary Kerry hasn’t dispatched James Taylor to Moscow.

To be fair to the Kremlin, why on earth would the Obama administration think it had a dog in the Syrian fight anymore? Over three years ago, the White House outsourced American policy there to Moscow, as was obvious to everybody except Obama and his coterie of self-styled foreign policy geniuses. We gave Putin what he wanted in Syria—preserving his Assad client regime while demonstrating Russian resolve and power—and for that we have nobody to blame but ourselves.

Such reckless antics have worked well for the Russians so far, given Obama’s preference to avert eyes and hope for the best whenever Moscow misbehaves.

This has become deeply embarrassing as the Syrian nightmare has descended into war crimes and even genocide on a truly horrifying scale. For an administration that prided itself on its alleged humanitarianism, this is an appalling ending which the world will not soon forget. The Russians, of course, have acted like Russians, bombing and shelling haphazardly, adding impressively to the death toll among Syrian civilians. This, too, was easily foreseeable by anyone who witnessed what happened to Chechnya. Moscow does not believe in tears, as they say.

Not content with diplomatic gloating, Moscow is flexing its muscles in Syria now, showing off its strength for political effect. Russia has just sent more late-model anti-aircraft missiles to that country—an odd choice in weaponry given that the Islamic State, which the Kremlin boasts of fighting energetically while accusing Washington of collaborating with it, has no aircraft.

Just in case anybody in the Pentagon missed that unsubtle move, Russia’s defense ministry this week bluntly stated that any effort by American airpower to change “facts on the ground” in Syria will be countered with live fire. Responding to rumors that the U.S. military wants enhanced airstrikes against the Assad regime, the Kremlin spokesman minced no words: “I would recommend our colleagues in Washington to carefully weigh possible consequences of the fulfillment of such plans.”

This was all predictable. Ever an opportunist, Putin is simply running the table in the waning months of Obama’s presidency. The Kremlin may never see an American president this weak-willed again, so the Russians are making the most of this undeserved geostrategic gift while they still can. Signs of this aggressive opportunism are everywhere.

Although we are accustomed to Moscow playing dangerous games when American warships are close to Russian shores—jets buzzing our vessels low and fast, usually—this is now spreading far beyond the Black Sea. Reports that the Russian navy has created a new strategic bomber division in the Far East to monitor and harass the Americans across the Pacific region indicate where this is headed. Soon Tu-22M3 Backfire bombers, long-range carrier-killers, will be shadowing the U.S. Navy as far east as Hawaii, in a manner not seen since the 1980s.

Obama has gone to great lengths to deny that we’re in Cold War 2.0, as I explained after Moscow’s annexation of Crimea, but Putin isn’t playing along with that script. This week, his defense ministry announced that it’s considering re-opening military bases in Cuba and Vietnam. These were shuttered after the last Cold War, and any indications that the Kremlin wants them back, particularly in Cuba, conveniently close to Florida, likewise indicate where this is headed.

Much of this is just for show, hardly more than chest-thumping by Moscow. News that Putin is building up his nuclear arsenal while Obama cuts ours as rapidly as possible—Russia’s military today has over 400 more nuclear warheads than the United States—means more politically than militarily.

That said, some of the Kremlin’s current military moves are deeply alarming and indicate a risk-taking mood in Russia’s leadership that ought to seriously worry NATO and the Pentagon. Things are getting scary in the tightly packed and jumpy Baltic Sea region, where Moscow is eagerly flexing its military muscle, seeming not to care what anybody thinks or feels about it.

Overflights of Finland and Estonia—the latter is in NATO while the former is not—by Russian aircraft have become almost routine, an on-going demonstration of Kremlin honeybadgerness. But those aerial cat-and-mouse games are customarily done by slow, unarmed Russian planes, just to send a message to the Finns and Estonians to not get any ideas about disobeying Moscow.

This week, however, Putin upped the ante by sending armed fighter jets to intimidate Helsinki and Tallinn. Yesterday, two Su-27 fighters of the Russian air force, called Flankers by NATO, overflew Finland. Their incursions were brief but, significantly, the Flankers were armed for combat.

Then, early this morning, another Flanker violated Estonian airspace—fully armed and with its transponder turned off. This incident, the fifth violation of Estonian airspace by the Kremlin so far this year, is significant since that country belongs to NATO. None of the Baltic republics have their own fighter jets. That’s handled by a composite Alliance jet squadron. If the Russians keep sending armed jets over Estonia, the odds of a confrontation with NATO fighters rise dramatically.

Today’s biggest news, however, comes from Estonian reports that the Russian military is sending Iskander-M missiles to Kaliningrad on a civilian freighter. It’s expected to dock in Kaliningrad today with its alarming cargo.

The Iskander-M system, called SS-26 by NATO, is the replacement of the Scud missile of American Gulf War memory. It has a range of 300 miles and can carry either a conventional or a nuclear warhead. An Iskander-M based in Kaliningrad can strike targets deep in Poland and across the whole Baltic region. Make no mistake, this is primarily an offensive weapons system.

There’s a reason that the Kremlin promised to not ship this missile system to Kaliningrad back in 2009, in exchange for President Obama’s scuppering of missile defense in Poland and the Czech Republic. Activating an Iskander-M unit in Kaliningrad, west of the Baltic republics, is rightly seen as destabilizing by NATO’s whole eastern flank which, despite security promises by the White House, remains vulnerable to Russian attack. For Warsaw and several other NATO capitals, this move resembles a Baltic version of the Cuban Missile Crisis.

This constitutes a direct challenge to Washington by Moscow—and by Vladimir Putin to Barack Obama, personally. The KGB officer in the Kremlin is seeking to get in one last, grand strategic humiliation for our president before he leaves office. And why not? Such reckless antics have worked well for the Russians so far, given Obama’s preference to avert eyes and hope for the best whenever Moscow misbehaves.

Not to mention that Putin is surely aware that his window of opportunity is closing soon. The campaign of the very Kremlin-friendly Donald Trump is in free-fall, so Moscow will likely have to contend with an angry Hillary Clinton in the White House in a little more than three months. She knows all too well that the Kremlin has pulled out all the stops to hurt her election chances—between spying, hacking, intimidation, and leaks of Democratic emails—and if the Clintons excel at anything it’s personal vendettas. The time for Putin to act, therefore, is now. Get ready, it’s going to be a bumpy autumn. 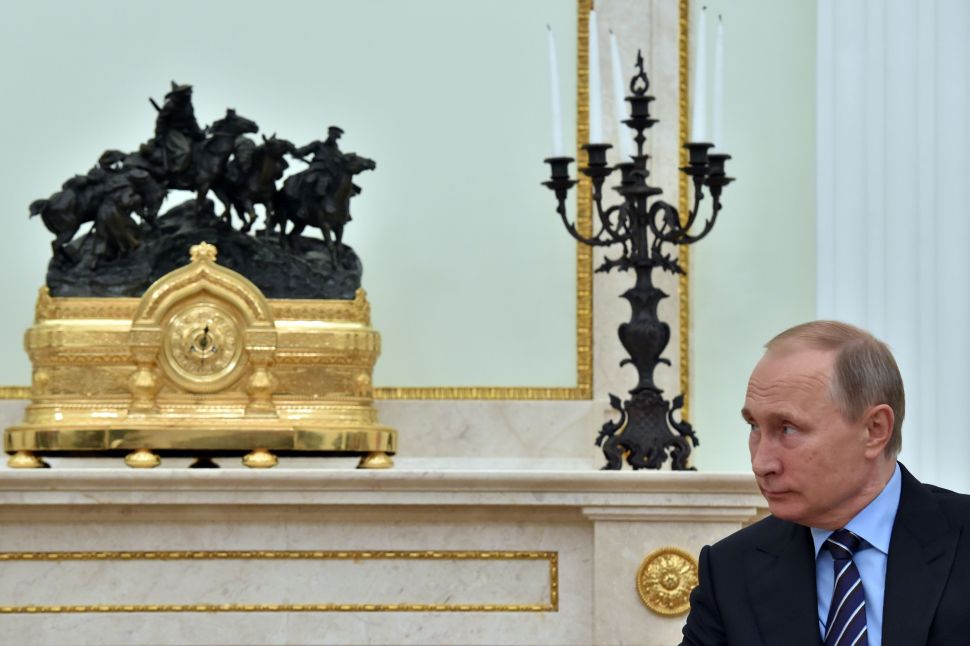