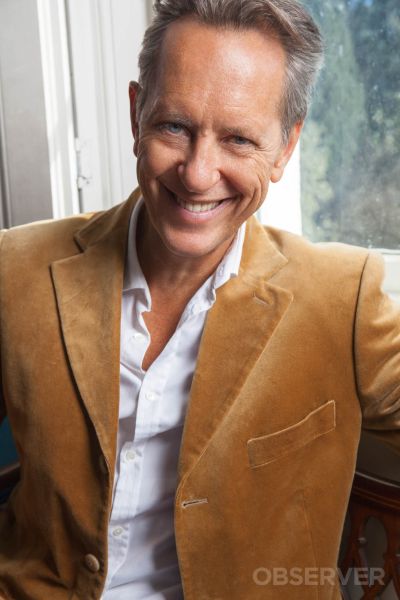 When Richard E. Grant was 12, he flew from Swaziland to London because his father, head of education for the British government administration there, thought it was time for the family to experience a little U.K. culture. “It was 1969,” Grant told the Observer recently. “I saw naked people on stage in the [love-rock] musical Hair, women in see-through blouses in Soho, and Piccadilly Circus was crammed with patchouli-perfumed hippies, which in combination with the petrol vapors, proved an intoxicating mix after all that country air. Drinking Earl Grey tea at Fortnum and Mason with its bergamot notes, seated in leather banquettes proved to be a complimentary scent.”

Even the statue of Eros glimpsed by young Grant when emerging from the tube in Piccadilly Station was virtually naked, a mere veil of cloth wisping around the god’s loins, adding to the eroticism. These are the influences that aroused Grant’s new perfume, Jack-Piccadilly ’69. It is the third in his Jack collection (named for his love of all that is quintessentially British with the bottle sleeved inside a vintage-style Union Jack bag) and launched last month at Liberty of London. The heady concoction will make its U.S. debut this October 17 with a posh cocktail party at Aedes de Venustas in New York. 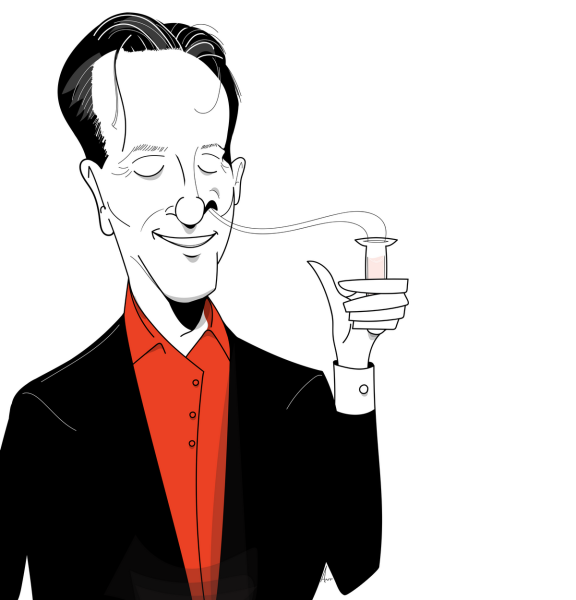 On a break from shooting Logan (Wolverine III, March 2017) in Louisiana, where he plays the mad-scientist super villain opposite Hugh Jackman, Grant visited New York and met the Observer for tea at Ladurée. He doesn’t actually drink tea—or coffee or alcohol for that matter—but the lanky, sapphire-eyed actor-writer-director with a hyperactive nose that might possibly rival that of a drug-sniffing police dog, drank in the tearoom surroundings, sniffing the banquette and chair. When asked to describe the velveteen upholstery, he quipped, “It smells like a very old powder compact where the powder is almost gone. And there’s just a sort of scintilla of a taste of what is left.”

Grant has played over 60 characters on film and TV including Sir Percy Blakeney—a.k.a. The Scarlet Pimpernel, a vampire, the father in Girls, the debonair art historian in Downton Abbey, John the Baptist, Franz Kafka and that wired wastrel Withnail. He has cultivated the role of perfumer with the same obsessive, thrilling abandon. Although he is quick to say he is not a perfumer, he thinks in odors, recalling the exact scent and brand of his mother’s hairspray (Elnett) and perfume (Worth) to his father’s scent (Eau Sauvage). Try asking him what perfume each of his film characters would wear and he does not miss a beat. For Izembaro, King of the Mummers, in Game of Thrones? “Prosciutto and beer I think would be his scent of choice.” The villain in Logan? “Something created in a lab smelling like hospitals, chemicals and morphine.” 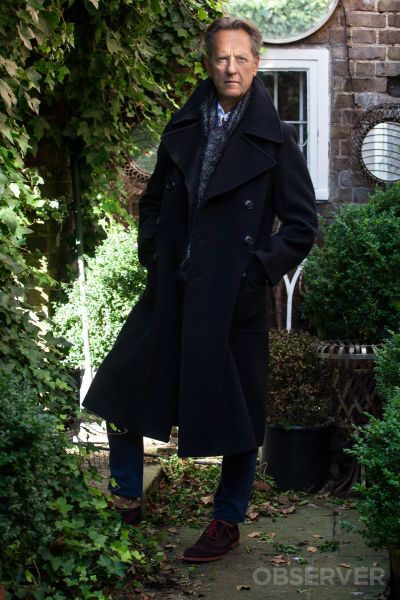 As we chatted, the actor pulled out a bottle of Jack from his black canvas bag, the first and signature scent inspired by his gaunt, wired, perpetually intoxicated Bohemian character in Withnail and I, the cult film for which critic Roger Ebert called Grant a “tour de force.” Ebert credited Grant for creating “one of the iconic figures in modern films.” One can’t help but be curious about how Ebert would have reacted to the odor of this archetypal figure; the scent won the Best New Independent Fragrance award at the FiFi awards last year.

Laced with zesty citrus and marijuana notes, the perfume has an iconic mesmerizing sort of power that Grant calls “addictive.”

What would this teetotaler know about getting high? “Swaziland produces some of the greatest pot on the planet,” said Grant who admitted to smoking the herb once or twice a month. “It allows me to be slightly removed from being myself 24 hours a day, which is a very good thing because I’m hyper…So it’s a way of just slowing down a bit.”

Fans of the iconic debut Jack include Downton Abbey’s Hugh Bonneville, Annie Lennox and his close friends of 30 years, Sting and his wife Trudie Styler. According to Sting, who upon the Observer’s request supplied a blurb on the advent of Grant’s American perfume launch, “Jack is not just for Englishmen or English women for that matter…Now everyone can enjoy wearing this hypnotic fragrance that subtly blends lime, marijuana and the tang of mandarin in Jack original, or patchouli, petrol, bergamot and leather in the new Jack-Piccadilly ’69, that Richard has described as his ‘Sex in a bottle.’ The message is clear: The British are back, and this time you’ll want them to stay!”

It was Styler who insisted Grant make an appearance at Aedes de Venustas, the opulent, aubergine-walled West Village boutique that curates mostly exclusive and niche perfumes. After all, the store is the go-to scent salon for Beyoncé, Madonna, Steven Meisel, Jennifer Lopez, Sarah Jessica Parker, Gwen Stefani and Grant’s Logan co-star Hugh Jackman to name a few. Co-owner Karl Bradl said he receives four to five requests a day from brands looking to be showcased at Aedes and was once pursued down the street in Paris by someone who recognized him and later sent her perfume to his hotel. Unswayed by celebrity, Bradl makes decisions based on the scent with consideration of the packaging. So when Grant showed up with his little black bag, co-owner Robert Gerstner was far more interested in the scent than the striking gentleman in front of him or the phone call from Sting’s assistant foretelling his arrival and took a sample of Jack to share with Bradl.

“I always wanted to bring some British flair into the shop since everything is French and Italian,” said Bradl, who doused himself with Piccadilly ’69 after sniffing it on a tester.

Celebrities don’t generally run around to perfume boutiques with samples of their perfumes. Most celebrities with perfumes have never even met or communicated with the noses behind their scents either. But then again, celebrities don’t travel to Grasse, the perfume mecca in the south of France, and take a virtual internship at a world-renowned perfumery, International Flavors and Fragrances.

“When you arrive in Grasse and open the car door it’s like an olfactory orgasm,” said Grant, who returned to England with samples of essential oils to mix in his kitchen, blending until, as he puts it, “it arrives at the smell that I imagined in my head.” He then shared the perfume’s preliminary mix or “sketch” whipped up in his kitchen with celebrated French perfumer Alienor Massenet, telling her, “ ‘These are the ingredients that go into Jack, this is how many drops I put in here.’ It was the perfect partnership in that she was very open. She said, ‘You have such a clear idea, it makes my job much easier. You haven’t just given a brief saying, I was walking through the Himalayas and there was the swish of a tiger’s tail, and I thought of my auntie Julia in Long Beach.’ ” 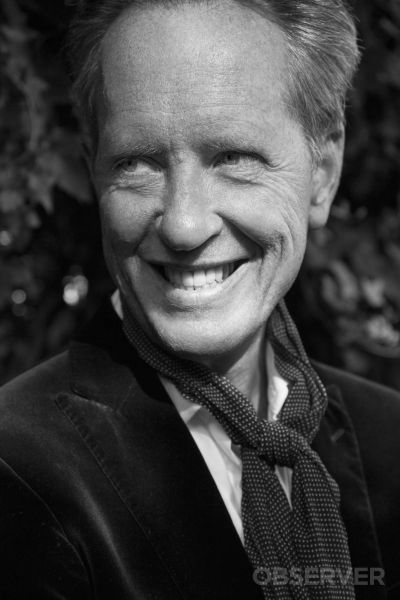 The recipe for Jack-Piccadilly ’69, his olfactory coming-of-age erotica in a bottle came to him at 2 a.m., when he blended two of Massenet’s trials, one containing oud, a seductive ingredient his essential oil collection lacked. (He waited until 6 a.m. to call the perfumer to tell her of his “eureka” moment.)

Everything is hands-on with his fragrance collection, from the copy to the packaging to the Jack Perfume web design featuring a puppet theater because Grant had marionettes as a child—you catch a glimpse of them in Wah-Wah, the gorgeous, hilarious and heartbreaking autobiographical film, he wrote and directed in 2005. The star is even his own publicist. When Grant showed up in person at the offices of 30 British beauty editors—friend and mentor perfumer Roja Dove shared his list—to give them a bottle of Jack, the response was that of incredulity.

“It was in January, right after Christmas, when everything’s in the doldrums…and nobody’s got any money left, and the weather’s bad. I went around with Liberty of London bags and a full-size sample bottle to each beauty editor. And I just turned up at the desk, cold. People did say, ‘You’re kidding.’ And an assistant would come down and go, ‘Oh, it is actually you. This is not a ploy.’ ”

Grant attempted his first perfume at age 12 for his crush, an American girl. His flower of choice? Gardenia, the “Holy Grail of flowers” in his words. “I’m obsessed…It’s my favorite scent in the whole world and has so far proved impossible to extract,” said Grant. His recipe consisted of boiling the gardenia and rose petals in sugar and sealing them in four jam jars and burying them in the ground. “When I opened them two weeks later, thinking that they would morph by magic into beautiful scents, they were just rank! The stench!” Ever resourceful, Grant decided to craft some homemade stink bombs for tomfoolery later on. He shared what happened after he got hold of an oil filter from his garden shed and poured the stuff into balloons. “My friends and I played a make-believe war game. Typical boy stuff, we had sticks—we used to pretend they were swords—and I threw these stink bombs. I got into big trouble from the other mothers because the boys went home covered in green slime.”

Grant has always been deeply aware of smells. Cheese and chocolate he finds offensive: “If I’m at a dinner and the chocolate and/or cheese comes out, I will literally go to the bathroom until that course is done.” He detests the cacao, vanilla-influenced fragrance Angel by Thierry Mugler: “It’s so overwhelming if I smell someone wearing it even from a distance I move away.”

But a scent can be equally seductive to him. “I was at Sting and Trudie’s anniversary in Tuscany, and I was dancing with a total stranger—and it was very hot, and I smelled her neck, and I said, ‘Oh, my God, that is the closest to a gardenia I’ve ever smelled on a human being.’ I asked, ‘What is it?’ She said, ‘It’s called Kai.’ And I’d never heard of it…I didn’t even know her. I said, ‘This scent is so powerful to me that I literally could pull your clothes off and lick you from top to toe.’ And she said, ‘Steady on. Take the vial of perfume instead!’ ”

The big question: What is Richard E. Grant’s favorite smell? “My daughter’s neck,” he said. “It smells like freshly baked almond biscuits. I think this is where we are still, first and foremost, animals in that, if I was in a completely black room and there were 100 human beings, and I smelled everybody’s neck, I would know her scent.” 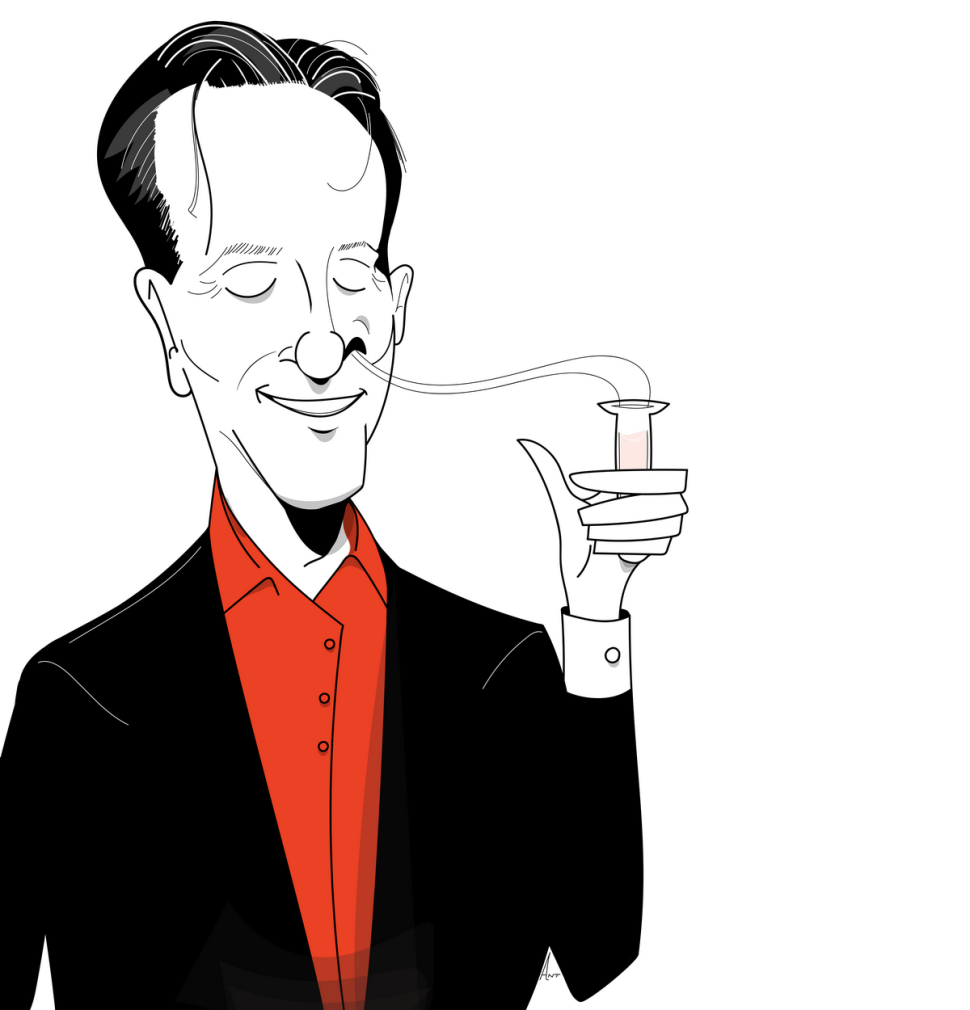