On October 12, WikiLeaks released part four and five of Clinton campaign Chair John Podesta’s emails, with part six to be released on October 13, and part seven to follow on October 14.

“As soon as the nomination is wrapped up, I will be your biggest surrogate,” current Interim Chair of the Democratic National Committee (DNC) Donna Brazile, wrote to Podesta in a January 2016 email. As a Vice Chair of the DNC, Brazile was bound to neutrality per the charter, but as shown in several emails released so far, that was not the case.

“I pushed back hard on this, and Axe. So weird to attack the kids the night before the first primary,” Brazile wrote in an email she forwarded to Podesta about what CNN was doing while she served as a CNN contributor.

On October 10, an email was released that showed Brazile tipping off the Clinton campaign to an outreach campaign being conducted by the Sanders campaign. Brazile defended herself on Twitter claiming she also sent the Sanders campaign “advice,” but did not release or cite any examples.

On October 11, The Young Turks’ Jordan Chariton first reported another email that showed Brazile tipping off the Clinton campaign to a question on the death penalty that would be asked at a CNN Town Hall the next day. Brazile was a CNN contributor at the time, and that wasn’t her only helpful tip. “For the debate team,” she wrote in a March email about the Voting Rights Act, forwarded to Podesta.

In 2013, during an interview with ABC News, Brazile said, “if Clinton gets in the race, there will be a coronation of her,” foreshadowing that she and the rest of the DNC and Democratic Party would line up behind Hillary Clinton as the nominee before a single person voted in the Democratic primaries.

In a March 2016 email, Mark Alan Siegel, a former New York State Assemblyman and Democratic official, advised the Clinton campaign staff to offer Bernie Sanders and his supporters a reduction in future super delegates to pacify them. “So if we ‘give’ Bernie this in the Convention’s rules committee, his people will think they’ve ‘won’ something from the Party Establishment,” he wrote. “And it functionally doesn’t make any difference anyway. They win. We don’t lose. Everyone is happy.”

Neera Tanden, president of the Center for American Progress which publishes Think Progress, wrote in a January 2016 email, “But I should say that I would do whatever Hillary needs always. I owe her a lot. And I’m a loyal soldier.”

An April 2015 email describes the Clinton campaign and DNC coordinating to rig the debate schedule for Clinton’s benefit. The debate schedule was a commonly cited criticism against then-DNC Chair Debbie Wasserman Schultz, who resigned after the WikiLeaks release of DNC emails in July showed her overt favoritism for Clinton all through the primaries.

“Through internal discussions, we concluded that it was in our interest to: 1) limit the number of debates (and the number in each state); 2) start the debates as late as possible; 3) keep debates out of the busy window between February 1 and February 27, 2016 (Iowa to South Carolina)” read the email from Charlie Baker, a senior advisor to the Clinton campaign from the Dewey Square Group. “The other campaigns have advocated (not surprisingly) for more debates and for the schedule to start significantly earlier.”

An email from November 2014 shows Clinton campaign staff backing a law that would push the Illinois primary from March to April or May, with their reasoning being that the state could potentially serve as a lifeline to moderate Republicans as it did for Mitt Romney in 2012. “The Clintons won’t forget what their friends have done for them. It would be helpful to feel out what path, if any, we have to get them to yes. This will probably take some pushing,” wrote Clinton Campaign Manager Robby Mook to Podesta. The primary wound up not being moved, with Trump winning Illinois, but the push was strategic as Clinton didn’t poll well against moderate Republicans such as Sen. Marco Rubio and Gov. John Kasich.

In damage control over a false statement Clinton made about Nancy Reagan’s role in the HIV/AIDS epidemic, the Clinton campaign noted in an email chain that they would have to coerce Clinton into admitting she was wrong. “Here is a revised draft of a statement. It does include the words ‘I made a mistake’ in the first line. We need a strategy for getting her to approve this.”

And then there’s the overly docile press, who were so eager to help Clinton get elected. In one email chain discussing the upcoming release of exchanges between Clinton and writer Sidney Blumenthal, insiders noted that the Associated Press appeared to be willing to allow the Clinton campaign to plant favorable stories. “[T]hey are considering placing a story with a friendly at the AP (Matt Lee or Bradley Klapper), that would lay this out before the majority on the committee has a chance to realize what they have and distort it,” wrote Nick Merrill, the Clinton campaign’s traveling press secretary.

“She is going to read me the story later today off the record to further assure me,” Clinton campaign Communications Director Jennifer Palmieri wrote in an email to Podesta and other staff about New York Times‘ Maggie Haberman coordinating directly with the campaign to provide Clinton with favorable coverage.

In March 2015, an email from Clinton campaign manager assistant Marissa Astor provides some options for when a story in the AP will be published, with a statement from Clinton and Q&A regarding her private email server, in addition to an option to “pre-negotiate” a TV interview.

An April 2015 email from Clinton staff issued a press policy that says, “Less than 100 people – NO cell phones, NO press.” According to the email, events with over 100 people, cell phones are allowed, “and ONE print pooler will be escorted in for her remarks only and then escorted out. NO tv cameras. Over 500 people in a public space – YES cell phones, OPEN press (all press access including tv cameras). At fundraisers in private homes NO tv cameras no matter the size. ONE print pooler only.” According to the email, Hillary Clinton approved the policy. “Huma spoke to HRC and she agreed with this plan,” wrote Kristina Schake, the Clinton campaign deputy communications director.

In a January 2015 email, in response to an inquiry as to whether the Clinton staff have any diversity they can point to, political consultant Jim Margolis jokes, “Robby claims he’s 1/16th Apache, so we should be all set.”

Part four, five, six, and seven brings the total WikiLeaks release of Podesta emails to around 10,000 out of about 50,000. 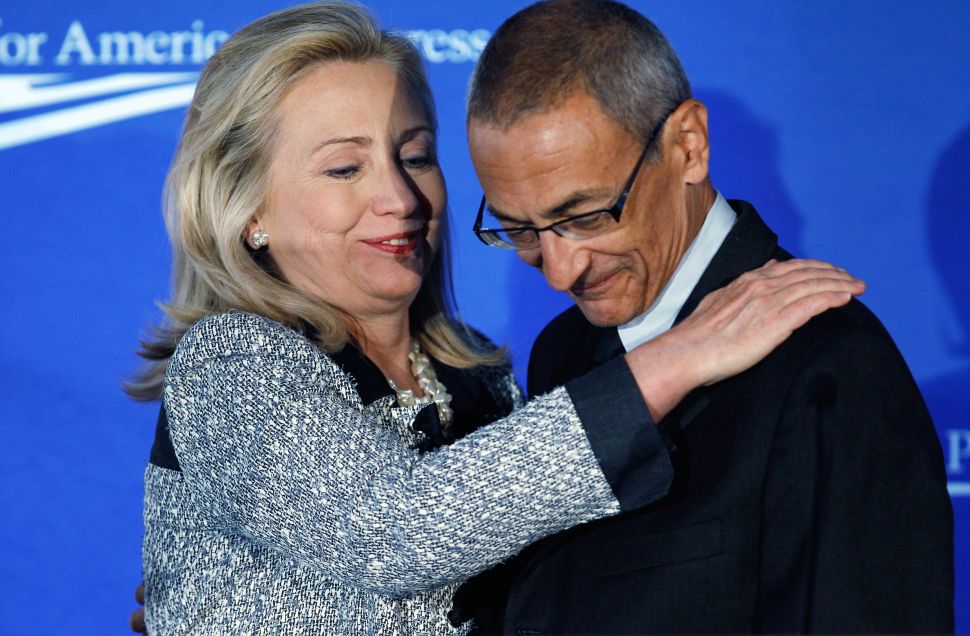