Folk music tells the story of the dark sacred night of the United States in two distinct ways.

First, it connects us with the music that was in the hearts and hearths of all of America’s immigrants, willing and unwilling. Folk music holds the DNA of their cultures, and of ours, too. That is our sacred night, the melodies and stories in our genes, the songs in the darkness before the light of our births. And folk music, as it exploded in the coffee houses, college quads, town halls and tap rooms in the 1950s and ’60s, kept alive a continuous line of music: music that extended from the neon-lit middle of the American century back to the mossy, grassy and tragic villages of West Africa, the peat-covered shacks of Kircubbin, Kinross and Derry, the sunless wheels of the North English workhouses, the long, candle-lit winters of the Shtetl.

Folk music reminds us that rhythm is a train and melody is a chain, with quirks and tics and rhymes and lines that trickle from a land before language.

Secondly, American folk music served as literal broadside, a posting of news and events, providing instruction and inspiration to Americans fighting against the oppressions of the blacklist, Jim Crow, segregation, and other everyday horrors that scarred our republic. Within a breath of our lifetimes, even as one hand of the Body American reached for the moon, the other hand still held the whip, still filled many of its citizens with fear. Folk music tried to tell that story, to serve as a talking drum as the Republic began to shudder with the awareness of the weight of the chains and slave blocks it was built upon.

Sadly, for the most part rock ’n’ roll never really found a way to tell that story, not after the early 1960s, anyhow.

Rock ’n roll became a medium that chased after shiny and sparkly objects, and largely forgot about the ethnic planks it was built upon; the art form that had risen out of the shattered and scattered DNA of the Ivory Coast soon came to be represented by the grinning pink of the Whiskey A Go Go. True, there were some promising leads, especially in the first decade, from the studios of Chess and Sun; but by the mid 1960s, most of that connection, the ability of electrified music to tell the story of America’s disenfranchised and dispossessed, was gone.

Where once the Weavers stared down Congress and even faux-shabby opportunists like Bob Dylan sang for Freedom riders, by the time the 1960s had become swingin’, false heroes held sway, and we worshipped golden calves and golden thighs; we bowed to Dionysian pretenders who preached revolt but offered no meaningful map for change. As I love to point out, not only did the Lizard King and his kind fail to stop the Vietnam War, but Rear Admiral George Stephen Morrison, who’s son’s face remains plastered over the false dream of the 1960s, was commander of naval forces at the Gulf of Tonkin, and he actually started the Vietnam War.

But for a few moments before the fight for freedom meant the fight for the freedom to get high, folk music was an earthy, riotous, melodic way to tell the story of America’s marginalized, provide instruction and inspiration about how to affect change, and allow young men and women with guitars to make an honest connection with the Celtic wind and the Delta dust.

Damn, it was punk rock, babies, everything punk rock should have been, anyway, and everything some of rap music is. Like the greatest “old world” and African indigenous music, the earnest and joyous strums and twangs of America’s folk music revival were eminently and deliciously simple: in only a few days, enough chords could be learned to make a stringed box tell a story, and then it was up to you to use it to tell the news.

Oscar Brand, who died on September 30 at 96, was the teacher, the man who gave the folk music revolutionaries their tools.

Oscar Brand may not have been the face of folk music, as, say, Seeger or Dylan were, but he was the rock upon which the church was built. Through his radio shows, his songs, his concerts, his TV shows and his documentaries, he did more to build the framework for modern folk music than any man on our continent.

Oscar Brand understood that there could be a connection between the howls and drumbeats of the old world and the energy of the new atomic beat age; and that when these things combined, combusted, multiplied and mutated, when you brought together the sounds of the past and the furious energy of 108,000 young people with 108,000 guitars, it could be applied to diagnose (and maybe even heal) the slashes and wounds of the class and racial divide.

It was a beautiful dream and Oscar Brand believed in that dream, and never stopped believing in it. In a gentle, humble way he cast his shadow on generations.

Not only did he help disseminate the timeless harmonic twangs, drones, lullabies, thumps and death songs of the past, he created the future, too: he played an extraordinary role in the careers of the Weavers, Bob Dylan, Phil Ochs, Arlo Guthrie, Dave Van Ronk, Leadbelly, and far too many others to name. Not only did Oscar Brand provide the song-kindling for the Freedom Summer, he also created the soundtrack for a thousand summer camp sing-alongs.

If you ever have seen in your mind’s eye the profile of a wise young man or woman or a wizened old silverhair singing songs and lullabies of power and tradition, you have seen someone who was, in some way, inspired by the work of Oscar Brand, even if they don’t know it.

Why does it matter?

We need folk music now more than ever. We need music that talks about the lies, libels and lapsed laws that still divide and define America.

Virtually all of modern rock ’n roll has failed to incite anything but the desire to dye your hair or scar your body with tattoos; it’s beautiful and brutal and vastly distracting, and there’s nothing wrong with that, but the growing pains of the Republic demand a little more. The times, friends, are far too frightening and too full of the potential for oppression and misinformation for music to continue to only instruct and change style.

Oscar Brand is a reminder that music once told a story, it pointed the finger at fascists and racists and homophobes and haters and warmongers. Folk music often served to put these people and their machines on notice that they were being watched; folk music not only told us which way the wind was blowing, but many times it also told us how to make that wind blow back, and what we might do to rebuild the lives shattered by institutionalized discrimination and exclusion.

Make folk music with beat boxes, with lips, with electric guitars, with synthesizers, with scratches of vinyl, with the sloppy slurs of stoner metal, with the frantic friction of hardcore, but just do it. Heck, don’t call it folk if you don’t want to, call it Brand, make it our Brand, our Brand to tell the truth; make it to remember that in our past, in our DNA, just about each and every one of us has a chain around our ankles or a tattooed number on our forearms or the splintered slat of a workhouse floor under our feet. If we don’t use music to tell the whole story of our time, those chains may enter our lives again. Use our Brand, our music, to tell the truth, to warn, to instruct, to comfort.

Honor Oscar Brand, and make music matter again. Sing out of the dark sacred night; sing to make the dawn rosy and holy. Free someone with your song.

I dedicate this piece to Paul Sanchez, America’s greatest living folksinger, and to Matthew Barton, who has dedicated his life to preserving the DNA of our music. Thank you to Dr. Jennifer Brout for listening and suggesting. 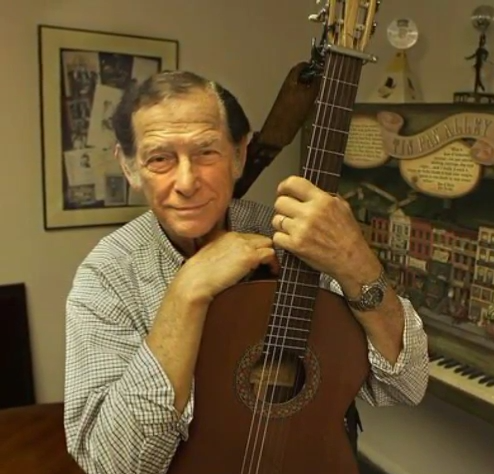