Supreme Court Justices Ruth Bader Ginsburg and Sonia Sotomayor insisted last night that, whoever the next president is, they absolutely must appoint a ninth justice as quickly as possible.

The empty seat on the Supreme Court, vacant since the death of Justice Antonin Scalia in February, has featured prominently in the campaign battle between Donald Trump and Hillary Clinton—and in the arguments of pundits trying to marshal reluctant conservatives and liberals into voting for the major party nominees. Republican presidential nominee Donald Trump has said he will appoint conservative  justices similar to Scalia—while Clinton has called on the Senate to stop blocking U.S. President Barack Obama’s choice, Merrick Garland, whose nomination is set to expire in December.

In the months since Scalia’s passing, the country’s highest bench has split four-four on a number of crucial cases, ranging from immigration to public sector unions—leaving a lower court’s ruling in place.

Ginsburg argued, in such polarized times, a ninth justice is necessary so as not to keep the Supreme Court from fulfilling its mandate.

“As quickly as possible—we function as nine,” she said.

Ginsburg in particular has been far from silent during the presidential race. In July, Ginsburg told the New York Times she was concerned about what would happen to the country as well as the Supreme Court under a Trump presidency, but later admitted judges should not be commenting on candidates. And she blasted the Senate for not confirming Garland.

She also sparked controversy when she called 49ers quarterback Colin Kaepernick’s choice to kneel during the national anthem to protest police brutality against African-Americans “dumb and disrespectful,” comments which she later said she regretted.

The justices also stressed the need for more unity among politicians across the political aisle—something Ginsburg said was the case when she was nominated to the Supreme Court in 1993.

“People were working together to get things done for the good of the people,” she said.

Sotomayor added that it is unrealistic to expect that any single individual, President Barack Obama for instance, who can solve the racial issues plaguing the country at the moment.

“I know there’s continuing conversation about race relations in the United States and we have an African-American president who is only a president,” she said. “No one can solve all of the problems of our society. Whoever becomes president can’t wave a magic wand and fix problems.”

The two justices, both of whom hail from New York, spoke about what drew them to law, the principles that guide them in their decision-making process, the necessary qualifications for a Supreme Court justice and also their sadness at the loss of Scalia. 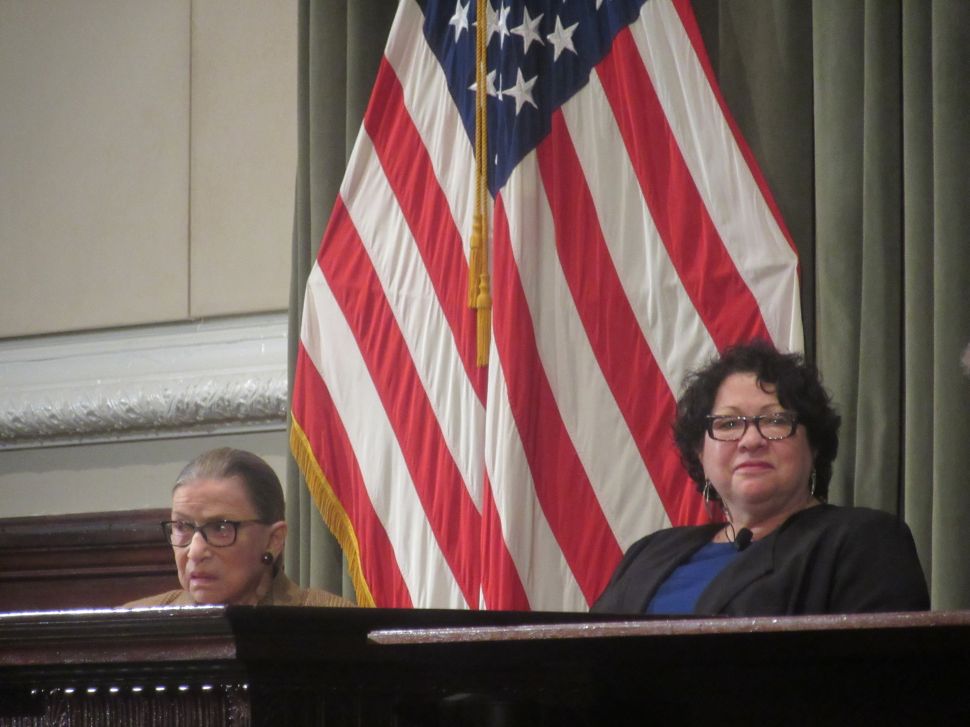