“I fell in love with tall ships when I was eighteen years old, 1976,” said Penny Gadzini, a member of the crew aboard the Schooner Pioneer. The restored 19th century boat regularly sails out of the South Street Seaport, but this weekend the boat united an eclectic group of around 40 artists, curators, musicians, professors and professionals just along for the ride. The occasion for the sail? Art. In fact, the sail was the art. A piece by artist duo New Draft Collective, whose work recontextualizes historic and cultural spaces—in this case, New York harbor.

All passengers were (presumably) united in a desire for the cloudy skies to clear. Gadzini, who’d once thought, “I’ll never get to do that because I’m the wrong gender and it’s the wrong century,” helped steer the boat out of Pier 16, past the Statue of Liberty and Governors Island, toward Staten Island and back along the Brooklyn coast.

Throughout the sail, New Draft Collective—Michi Jigarjian and Libby Pratt—explored the opportunities and limitations that the city and the sea present, with a group of contributors who spoke about less recognized historical aspects of a physical space so many New Yorkers know well.

Jigarjian and Pratt led their first sail in 2013, a project called Re-Current. They coordinated a reading, a performance, and talks onboard. This time, during ReCurrent Uncovered, they organized a piece of their own, entitled Voices Heard. As the Schooner Pioneer approached Governors Island three times throughout the afternoon, opera singers called out “hello” and “goodbye” to the boat, the good cheer a stark contrast to the gray weather.

Such warm greetings, of course, haven’t always awaited those who approach New York and the country at large. Onboard, Lyne Lapointe spoke about the Battery Maritime building, one of the oldest colonial ports and a former site of the slave trade. In 1990, she and her collaborator, Martha Fleming, mounted a 30-by-90-foot painting of a slave ship on the roof, raising awareness of the building’s dark history.

As a buoy chimed, photographer and visual artist Nona Faustine spoke about Juan Rodriguez, a sailor of African descent who was the first documented immigrant to what would later become Manhattan. “Even today, this is who we are,” said Faustine. “This is what America is made up of and it’s a beautiful thing.” Passengers from another boat called out, “ahoy!” Artist Jorge Alberto Perez supplemented details about New York’s colonial origins. He questioned the methods by which settlers had taken land from the Lenape tribe. It wasn’t, he suggested, the nominally fair sale that many school textbooks present.

“We were talking a lot about what it meant to the land by being on the …when you’re able to, just for a moment, be on the of New York City on a sailboat,” said Jigarjian. Slower and more intimate than a ferry, the sailboat brought participants literally closer to the itself. This time around, she and Pratt couldn’t ignore the “climate of what’s going on” regarding migrations, comings, and goings, in the U.S. at the moment.

Pratt mentioned Simone Leigh’s show at the New Museum, The Waiting Room, and referenced the artist’s ideas about song as healing. Pratt said she saw Voices Heard as a similarly palliative work. “There’s this need to retreat and heal,” said Jigarjian. “We found that connection, that idea of wanting to find peace amongst the turmoil.” Both women’s mothers immigrated to the United States—Jigarjian’s from Mexico and Pratt’s from China—though their interest in immigration extends far beyond their personal histories. “I think the political climate has been so intense lately,” said Pratt. “We’ve been thinking a lot about it, especially in the past few months.”

The boat docked back at Pier 16, and the passengers returned to their city lives. It was easy to return to where we’d started, welcomed back to the pier. The three-hour tour had evoked journeys, past and present, where the outcomes weren’t quite as clear, and the stakes were much higher than whether or not it would rain. 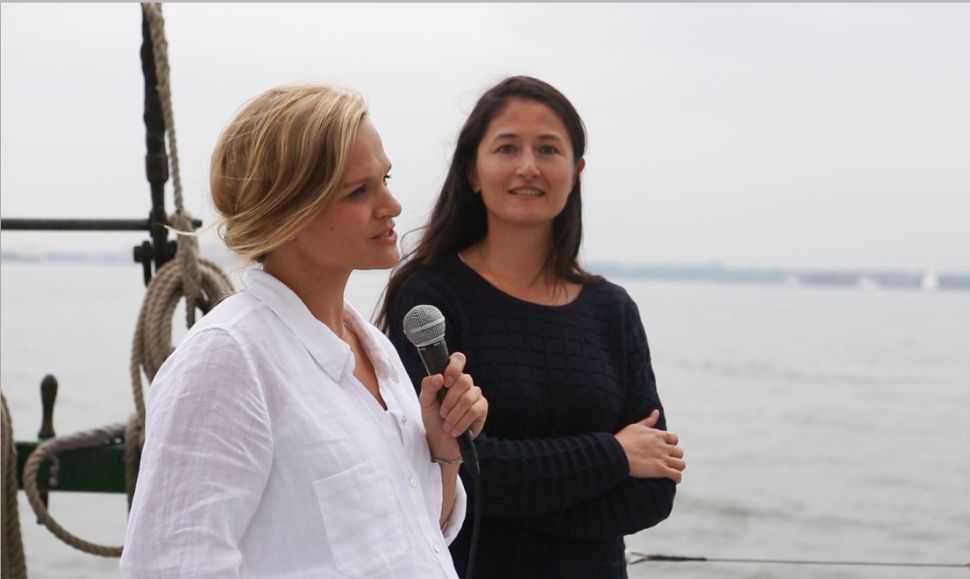