If I had any expectation whatsoever for MTV’s bewildering and unnecessary two-hour-long Scream Halloween special (which we’ll call “Halloween” here) it was that, no matter how hard it tried, it would not be able to shake the series’ inglorious tradition of occasionally — seemingly out of nowhere — stumbling upon a compelling idea only to immediately dispose of it or just as quickly forget it ever existed. What I didn’t expect was for “Halloween” to check this particular box within the first five minutes.

Fans of MTV’s Scream television series, or people like me who for whatever reason have stuck with this show for the last two years out of some inexplicable combination of begrudging admiration, fascination, hatred, and astonishment, will recall that the second season finale (which aired just a couple short months ago) revealed the killer to be Emma’s on-again-off-again boyfriend Kieran, himself the secret accomplice of season one’s killer Piper. (Don’t ask me why Kieran decided to murder a bunch of his friends. It had something to do with his dad abandoning him as a kid and, by his own declaration, that killing people was a lot more “fun” for him than seeking psychiatric help for it. Okee dokee.)

But in the show’s best and brightest twist so far, Emma, having finally uncovered her boyfriend’s psychopathic tendencies and getting the upper hand after a knock-down-drag-out fight, decides not to kill Kieran in retribution, but rather turn him in to the authorities to face justice and serve a lifetime in prison for his heinous crimes. This is kind of interesting! It’s different! Slasher flicks rarely, if ever, do this. The four Scream movies didn’t even do it. And it opened the door to some intriguing plotlines in the next, inevitable third season. But somehow sensing it had a golden opportunity on its hands at long last, Scream did what it does best: “Halloween” opens with another masked killer sneaking into Kieran’s cell and slitting his throat. Excellent. Rest in peace Kieran. You were actually interesting there for a hot minute.

Teased at the end of the second season, MTV assured fans that the Halloween special would answer everyone’s burning questions. It was never entirely clear to me exactly what questions this referred to, but in either case, “Halloween” definitely doesn’t answer any of them. What it does do is take our scrappy band of high school survivors and throw them into some unholy mix of a Scooby Doo episode and a more unfortunate relic of the ‘90s slasher flick revival I Still Know What You Did Last Summer — a film that, like “Halloween” sends its victims to a tropical getaway and, unlike Scream or really any movie or TV show I’ve ever seen, features a plot twist that hinges entirely upon neither the characters nor the audience knowing what the capital of Brazil is. Seriously. I Still Know What You Did Last Summer is a very special movie.

“Halloween” picks up eight months after Kieran’s arrest and finds Emma, Noah, Audrey, and the rest of the gang in a pretty chill place despite having just survived a second go-round of one of their peers trying incredibly hard to brutally murder all of them. Noah and Stavo have turned bloody lemons into lemonade with a best-selling graphic novel about Kieran’s murders. To be clear, this would involve them actually drawing gruesome, detailed illustrations of their friends being murdered and then profiting off of it, which seems absolutely insane, but hey, millennials, am I right? Eager to crank out a follow-up and overcome Noah’s writer’s block, Noah’s and Stavo’s editor suggests shipping the two of them off to a small island where a young woman committed a series of gruesome murders back in the ‘30s. Noah and Stavo, because they are apparently godawful people, decide not only to do this, but to also bring their friends along with them, without first informing them of the island’s macabre history. Everyone’s parents, wherever the hell they are, agree to let them do this because they either haven’t noticed that their children keep getting picked off by serial killers or they just plum stopped giving a shit. (Which, if we’re being totally honest, having observed said teenagers for two seasons now, I don’t blame them at all.) Naturally, within hours of landing on the island, people start getting murdered. Then people keep getting murdered until our heroes correctly deduce that the psychopathic serial killer is, in fact, the character who’s given off a psychopathic serial killer vibe literally every second they’ve been onscreen. Then they kill the psychopath. Then they all go home. Their parents seem happy to have them back and somehow completely oblivious to the fact that for a third time now their sons and daughters have narrowly skirted brutal deaths at the hands of a masked maniac.

All of this happens because this is a horror television show called Scream. It certainly doesn’t happen because this is how any normal, earthbound group of people would behave or make rational decisions, but, anyway, that’s not why we watch scary movies. At its worst moments Scream is total storytelling anarchy. It’s written as if an alien crashed on Earth and only got 24 hours to observe teens before being forced to create a television series about them. There’s no rhyme or reason to what any of its characters do or say. There’s no logic to how relationships are formed or alliances develop or enemies are cast against one another. In Scream’s very first episode, Noah points out that a slasher flick would never work as a television show. Every episode since then has been hopelessly devoted to proving him right.

At its best, Scream seems to understand this and I swear you can almost see in the characters’ eyes that even THEY are totally confused as to why they’re sneaking off to make out with someone when they’ve just, within the last several hours, seen half a dozen mutilated corpses and know that the culprit is still on the loose. Or why Emma, mere months after discovering her boyfriend was a murderous lunatic, would want to suck face with a guy who displays almost all of the exact same red flags, and even looks a hell of a lot like him, to boot. Or why she would be shocked when, yeah, this guy is also a serial killer. Though you could, I suppose, chalk that up to good old fashioned bad luck.

But Scream the TV series — neither its first two seasons, nor its perplexing Halloween special, nor (I’m guessing) its just-announced third season set to air next year — is ever as self-aware as it attempts to be. Which is ultimately its gravest sin: There’s absolutely no reason why this thing is called Scream. It’s not connected to the franchise’s four films in any way. The mask is different. The town is different. The killer’s voice is different. The characters are different. And the very thing that made the original film so unique and groundbreaking — that it was grounded in a semi-reality-based world where films like Halloween and Friday the 13th and A Nightmare on Elm Street already existed and had, in its characters, a rabid fanbase who all knew the rules and how to avoid being gutted — barely exists at all in its TV reincarnation. What little of Scream’s DNA can be found here is stuffed almost entirely into self-professed movie geek Noah, who repeatedly and hilariously makes film references that time and again fall on the deaf ears of other characters who either don’t know what the hell he’s talking about or fail to see why it’s relevant to what’s currently happening to them. It’s all deeply bizarre and confusing. If the last season finale didn’t do the job, “Halloween” almost certainly could’ve wrapped things up and sent this perhaps well-intentioned but misguided show on its merry way.

And yet, like it or not, a limited six-episode season 3 awaits us, which is kind of befitting of the arbitrariness of everything that makes this show what it is. “Halloween” ends with a callback to a convoluted backstory predating episode one that Scream keeps insisting is relevant without ever really managing to explain why or how. Maybe the third season will get around to that. Maybe it’ll introduce yet another secret, extra secret accomplice of Kieran’s and Piper’s and leave it to season four to get down to business. Maybe the moon will collide with the earth tomorrow and we’ll never find closure and we’ll just have to accept that this was a show where everyone did stupid, indefensible shit in a bizarre and incomprehensible world where everyone and their kid sister was a deranged homicidal madman but dammit isn’t that what growing up is all about?! Anything’s possible. Scream, you intolerable, baffling, beautiful bastard, I can’t wait for you to return. 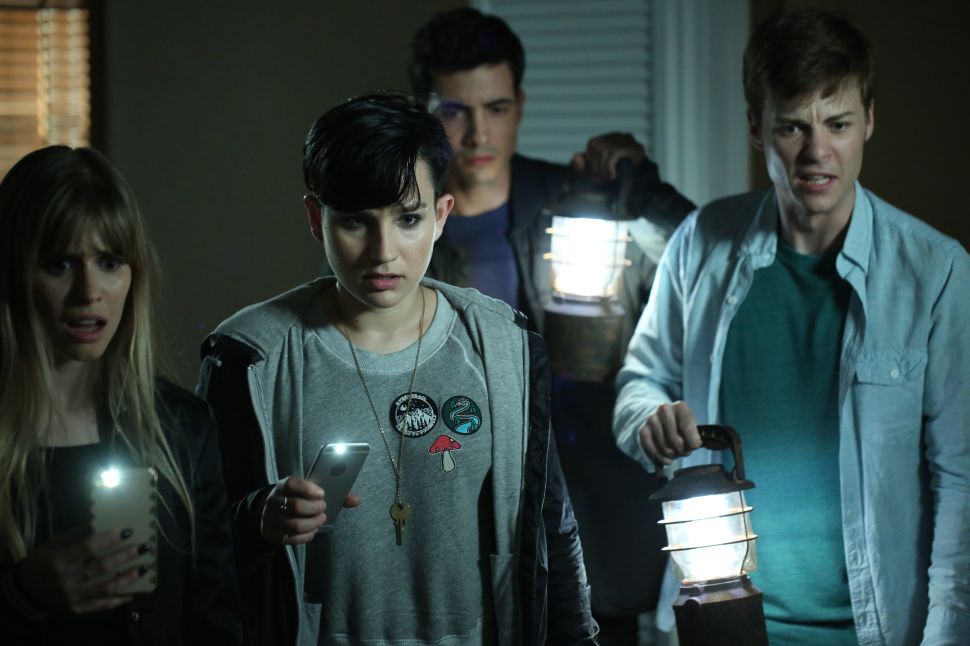