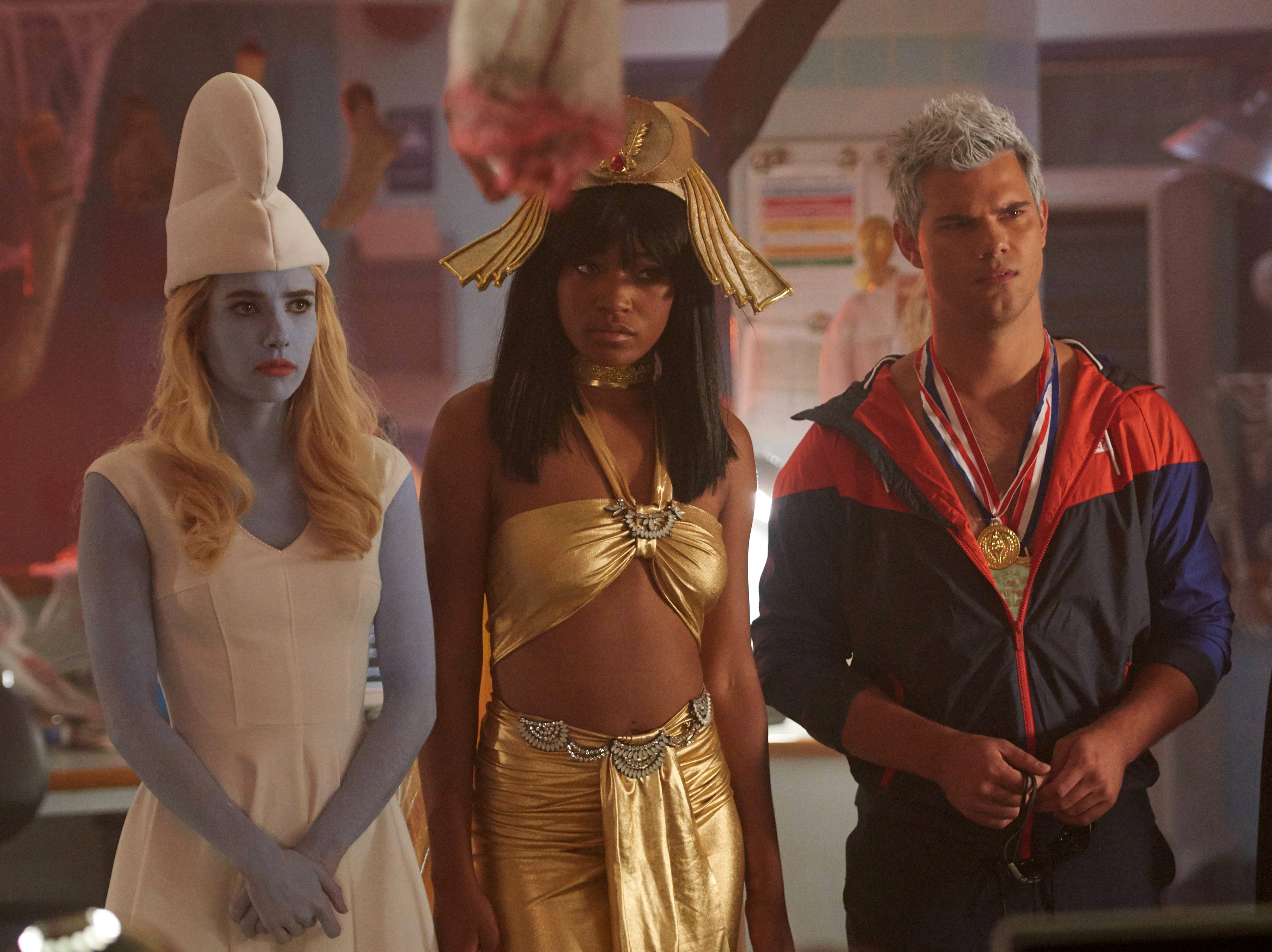 I don’t want to say that this episode made no sense. I really don’t. But this episode made no sense. Scream Queens decided, in one hour, to be a hospital drama, a mockumentary, a soapy horror–comedy, and somehow include a very long reference to Brokeback Mountain. I’m not even convinced Ryan Murphy knows what’s going on in this show. Hell, I’m not even convinced he watches it.

The episode kicks off with Chanel mourning Chad, who died after having his neck torn open. While Chanel bemoans the loss of her fiancée, Munsch reminds the group that Chad’s death confirms that he wasn’t the killer. It also indicates a shift in the killer’s pattern—before Chad’s death, only patients were being targeted.

I’m calling a bit of a red herring here. Brock likely killed Chad in a separate incident that had nothing to do with the Green Meanie. Scream Queens loves to introduce tangential deaths, and this has to be one of them. Besides, we’ve seen the Green Meanie kill all of his victims—except for Chad. I’m calling your bluff, Ryan Murphy, or whoever currently runs this show (I personally think it’s just a cardboard cutout of a young Jamie Lee Curtis in Halloween at this point).

In indisputably the best point of the episode, Denise (the always funny Niecy Nash) takes a moment to say goodbye to Chad and their secret, sexual relationship. She fondly recalls their roleplay (yes, this is where Brokeback Mountain comes into play). There’s even a little tent pitched in the background of the flashback, and I applaud the commitment to the scene. Denise vows to honor their former relationship by catching Chad’s killer—no small feat.

To do so, Denise solicits advice from Hester, who remains locked in the hospital’s basement. Hester suggests the hospital throw a Halloween party to use staffers and patients as bait in order to lure the killer out. Hester then demands to be allowed to go to the party. Although Denise initially refuses, she relents after the Green Meanie unsuccessfully tries to kill her. Hester is allowed out of her cell for one night in exchange for information, given that she is closely monitored (by an ankle bracelet, because there is no finer way to prevent murder than an ankle bracelet).

Meanwhile, Chanel throws a slow–motion fit after discovering that Chad’s will leaves all of his money to Munsch and the hospital rather than her—once again heavily implying that Brock and Munsch likely killed Chad.

Then, smack dab in the middle of the episode, there is a sequence of Chanel giving her fans Halloween gifts of bagged pus. It’s really just a three–minute mockumentary just kind of… there? No one ever really mentions it after that, so I guess I won’t either.

After a little narrative excursion, Chanel gets a check–up from Brock, who prescribes her a medicine with trace amounts of silver to help her feel better. The medicine turns Chanel a bright blue, which I googled, and is actually a real thing, and is called argyria. So now, Scream Queens is just kind of a PSA for little–known diseases.

Furious at Brock, Chanel accuses him of killing Chad, which he and Munsch quickly deny. When Chanel is given Brock’s alibi (that he and Munsch were sleeping together when Chad was killed), she furiously storms out, only to be confronted by someone dressed up as Ivanka Trump. The Ivanka quickly tries to kill Chanel, stabbing her in the leg. Chanel scrambles away, and Ivanka reveals herself to be Hester.

When Chanel #5 explains that she intended to be Ivanka Trump for Halloween, the Chanels and Zayday assume she is the killer. However, when Chanel #5 shows up to the party dressed as Ivana, and is faced with Ivanka/Hester. Suddenly, dozens of patients show up to the hospital with signs of psychosis and vomiting, because now this is actually a real hospital.

Chanel and Denise, however, can’t aid in the emergency influx of patients, as they’re busy communicating with Chad from the dead. Using an Ouija board, Chanel allows Chad to possess Denise’s body. Just as he’s about to reveal who killed him, however, Zayday interrupts.

Chanel #5 is cornered by Hester, but is stabbed in the back by the Green Meanie. Denise comes across Chanel #5 slowly bleeding out, and is killed with a difbrilator. It’s a big loss, but at least she went out with some pretty great (almost) last words: “You don’t need to do that! My heart is fine!”

As for next week, I’m not quite sure as to what I should expect. But if Scream Queens is just kind of being anything now, I vote for a cooking segment. Or a half hour of Black Mirror. Either will do. 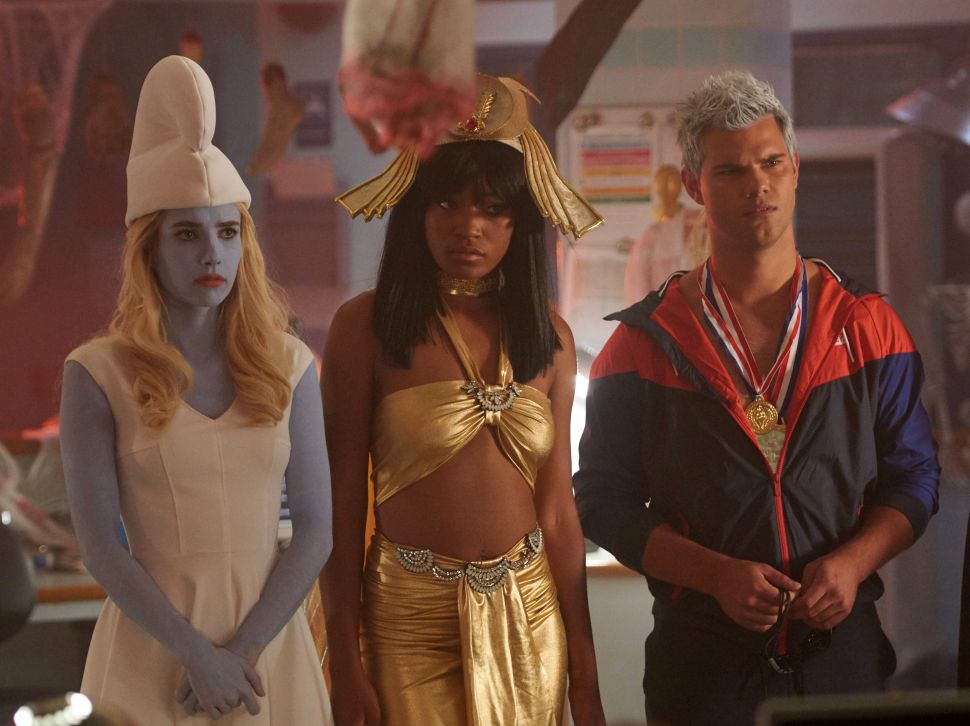