Dorothy’s ruby slippers from The Wizard of Oz have been among the most famous movie artifacts ever since Judy Garland clicked her heels and said “There’s no place like home.” Since 1979, that home has been the Smithsonian—an anonymous benefactor donated the famous footwear to the National Museum of American History.

But after 77 years the iconic sequins are starting to lose their luster—and the Smithsonian is turning to the internet to help pay for the refurbishment.

Today the museum launched a 30-day Kickstarter campaign to save the slippers, using the hashtag #KeepThemRuby. The Smithsonian is asking for $300,000 to offset the cost of the ruby repair—it has raised about $13,000 so far.

The Smithsonian receives federal funding, but these appropriations only cover part of the museum’s operating budget, including building maintenance and hiring guards for the collections. The museum does not receive any funding for the upkeep of its artifacts.

In light of this, Kickstarter approached Smithsonian Enterprises with the idea of partnering to refurbish some of the museum’s most famous objects—the first campaign, which took place in July 2o15, raised over $700,000 to conserve Neil Armstrong and Alan Shepard’s spacesuits. The slipper refurbishment is the next stage of the partnership.

“The collections are the real assets,” Kari Fantasia, deputy director of external affairs at the National Museum of American History, told the Observer. “This was a way for us to attract new donors and new visitors to the institution, and a great way to create awareness and raise funds.”

In the case of the slippers, the funds are sorely needed—Wizard of Oz costume designer Gilbert Adrian dyed commercially manufactured shoes red and attached a sequined netting to them. With the passage of time, however, the color has faded, the coating on the sequins is flaking off and some of the threads that held down the sequins have broken.

The Kickstarter money will first be used to help conservators and scientists understand how the materials in the slippers have broken down. Once they’ve figured that out, they will then determine the best conditions for their preservation, taking factors like light, humidity and temperature into account. The Smithsonian can then conserve and house the shoes in an environment where they can keep their sheen in the decades to come. The pitch makes clear, however, that the slippers will retain the marks from their wear during filming, since that adds to the object’s history.

“The ruby slippers are an iconic object, and we knew that we had an obligation to the American public to properly display and conserve them,” Fantasia said.

The red shoes will be taken off view early next year. Once they are fully refurbished (hopefully by 2018), the Smithsonian plans to place them in a new exhibition called “On with the Show,” which will feature American cultural artifacts like the original Muppets and R2-D2 from Star Wars.

If the campaign is successful, backers can snatch up one of the glittery prizes created by six-time Tony Award-winning costume designer William Ivey Long—the trinkets include T-shirts, tote bags, decals, posters and even replica slippers.

“If you back one project at the Smithsonian, you’re more apt to back another,” she said. 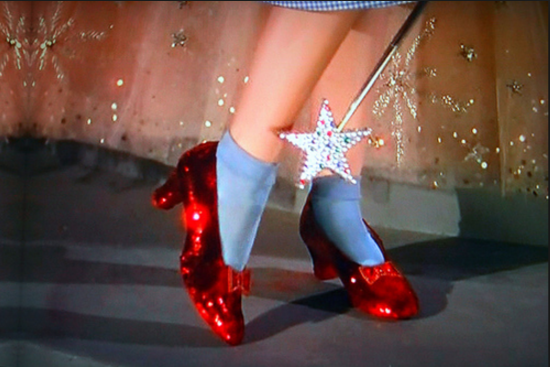