On Sunday, following the digital release of her album A Seat at the Table, Solange Knowles debuted two fresh new videos: “Cranes in the Sky” and “Don’t Touch My Hair,” for singles of the same name. The projects are the first since the 2012 single “Losing You,” from the True EP. These new videos came to fruition with help from a full team, including Knowles’ husband, Alan Ferguson, as director, Shiona Turini as stylist and Carlota Guerrero as art director. The resulting imagery underscores the artist’s indie approach to music, and, it turns out, style.

Durags + Fur, Don't Touch My Hair || @saintrecords from our millions of meetings I forced upon you and boards and edits and trunks and tears and motor homes and late nights and early mornings – I'm so honored to be a part of your masterpiece. You push everyone to do their best work and your eye is unparalleled. So proud of you, of this, and how you represent for all black women. This shit is for us #iconic #honestly #truly

There are moments (many moments, usually) when you watch a music project and a brand rings out. Beyoncé in Lemonade wearing Roberto Cavalli, Rihanna in, well, almost anything. It’s usually the marriage of a major name in music partnering with a major name in style. And for what it’s worth, Solange did have one of those moments this weekend when she donned an Acne Studios down coat and matching dress (similar to this $1,150 one) in a scene of the “Don’t Touch My Hair” visual. However, most of the artist’s other moments were about the aesthetic impact.

Standing alongside Solange in the Acne coat were dancers in three major outfits of their own, instantly remarkable for their fur and do-rag pairings. Most notable of those furs was the oversized white fur coat Saulo Villela, the creative director of Adrienne Landau, created. The combination of the coats was all in service of the visual impact: these bodies carrying jugs and buckets on their heads in a glamorous ode to the East African practice. The whole while, Solange sings “You know this hair is my shit, rode the ride, I gave it time. But this here is mine.”

custom #PHLEMUNS sets in @saintrecords beautiful visual video for 'Don't Touch My Hair'‼️ thank you again Solange from the bottom of my heart for thinking of me to be included in such a beautiful & personal project! special thanks to @francfernandez for the second set of hands! #donttouchmyhair #aseatatthetable

That scene dissolves into another where Solange and crew revolve through a variety of poses, all wearing custom designs by PHLEMUNS. Having been worn by Justine Skye and Miley Cyrus, the brand markets itself as gender-free. That all melts in favor of beautifully composed, palette-driven shots. The result is like a montage of moving Instagram photos, which could be a theme through both videos. But particularly, the photo-like quality to the work becomes most potent when it is a direct nod to another artist’s work. Take the all green nod to Lynette Yiadom-Boakye’s “Complication” piece. The connection is significant, as all of the characters in Boakye’s work are black. The same is true for Solange’s recreation.

Elsewhere, Solange pumps her indie vibes up even more with a bit of DIY. In “Cranes in the Sky,” the purple yarn dress that she’s being unravelled in was, according to Instagram, a product of her own doing. A few seconds later, the blue dress which connects Solange to a string of dancers, was crafted by Tina Knowles and Tim White. But it wasn’t an original; it’s actually a recreation of a 1999 dress by Issey Miyake. White and Tina Knowles duo also teamed up on the creation of a gold fringe dress, which appears later on in the same video, now being shot in a canyon.

In all, the musician was reported to wear 14 looks (including the above contributions as well as two metallic looks from Anthony McDowell and more), shot in over 70 locations. 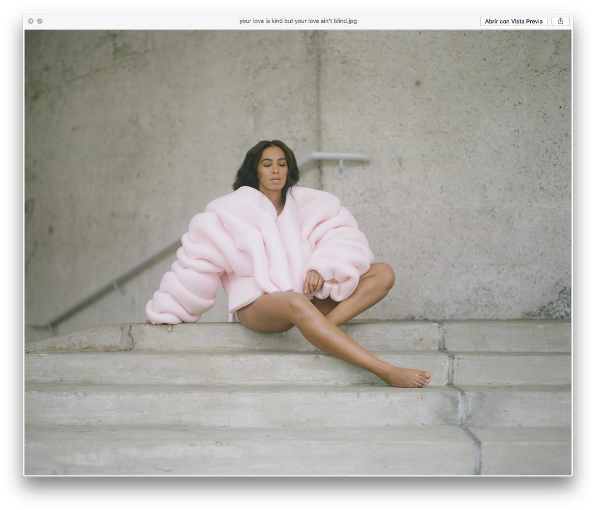