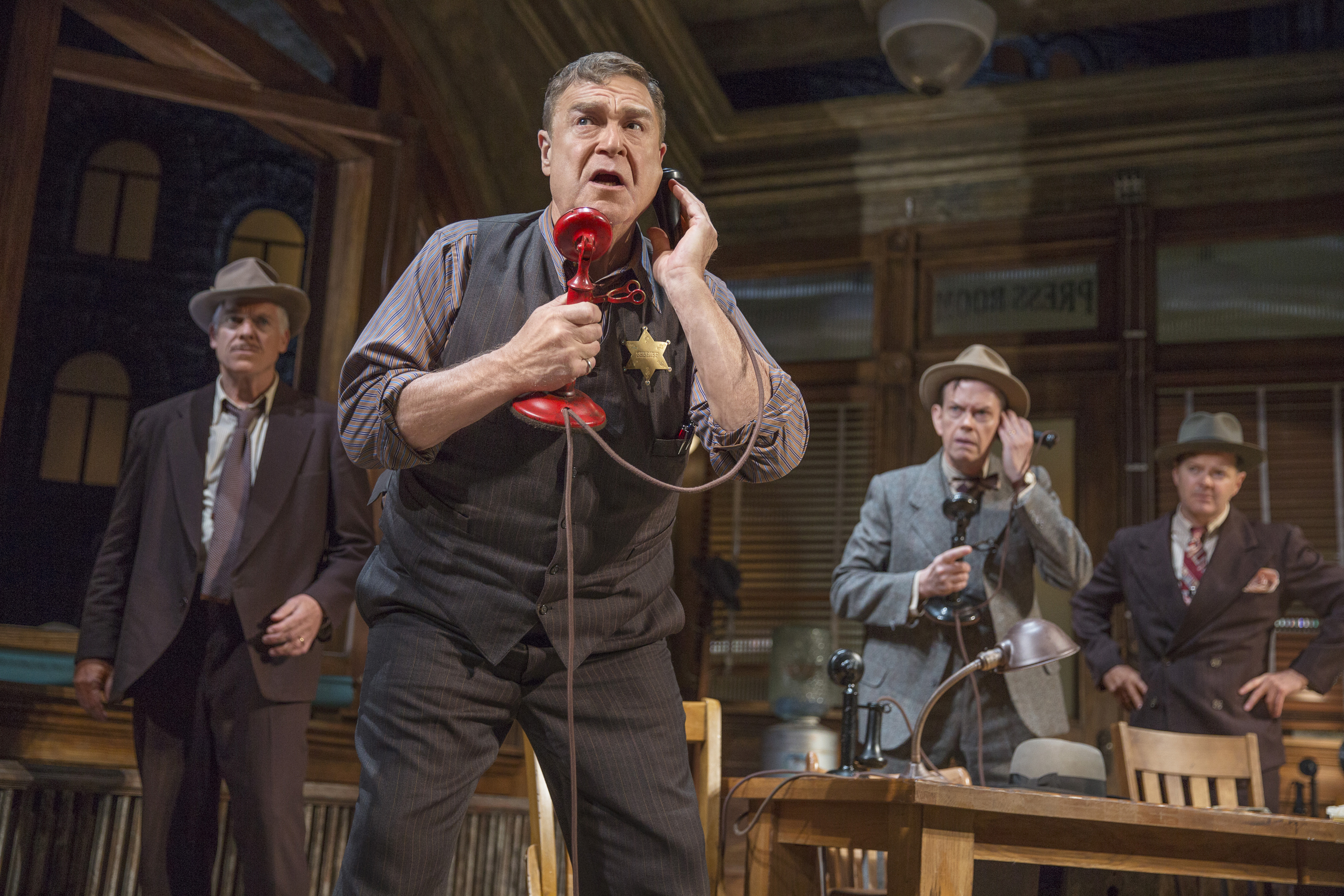 The Front Page—that tired, old farce from 1928 about the rowdy, tough talking days of cigar-chomping, ink-stained wretches yelling, “Stop the presses, I got a story that will break this town wide open!” before print journalism was decimated by the internet and (God forbid!) a plague called political correctness—is back on Broadway for its fifth hip replacement. I wish I liked it as much as the new bridge-and-tunnel crowd from Jersey did on the night I saw it, but I know defeat when I see it. Thanks to the ability of an over-the-top Nathan Lane to scream every line to the second balcony in a feat of lung power that should keep his throat doctor in business for the entire run, as well as the efforts of a not-so-starry “all-star cast” to milk laughs out of a petrified script, I did manage a few chuckles. That’s all. Otherwise, this production, directed by Jack O’Brien at the pace of a speedway derby, is nothing more than ambitious summer stock.

Written by Ben Hecht and Charles MacArthur, who were veteran Chicago reporters before they moved on to new careers (and real money) in Hollywood, this 88-year-old warhorse is still a noisy, harmless piece of exaggerated fluff that has about as much charm and relevance today as Getting Gertie’s Garter. The conflicts between bellowing city editors and scrounging, whiskey-guzzling reporters competing for new angles on the same story in a town with too many newspapers provide the action; a dirty, smoke-filled, nicotine-stained press room in the criminal court building on the eve of a hanging scheduled for 7 a.m., with a view overlooking the hangman’s scaffold (wonderfully recreated by set designer Douglas W. Schmidt, replete with vintage typewriters and a battery of phones connected to newsrooms all over town ), provides the cramped setting. “Not much you can do with a hanging—now if we had the electric chair in this state, that’s something you can sink your teeth into” is typical of the kind of dialogue that provided the laughs in 1928.

[‘The Front Page’] is directed and acted with the kind of forced energy that makes it all feel and sound as phony as a wooden nickel.

After the prisoner crashes into the press room from a jailbreak below, the suspense centers on how to get all of the other reporters away while ace muckraking reporter Hildy Johnson (John Slattery) can hide the escaped convict in a roll-top desk long enough to phone in his scoop and get to the train in time for his wedding. This leaves plenty of time for yelling matches between Hildy, who’s trying to get out of the newspaper business for good and go straight in a respectable business like advertising (one of the night’s biggest laughs), and his unscrupulous editor, Walter Burns (Nathan Lane), whose only interest is getting a front-page exclusive, no matter how ruthless. Lane doesn’t enter until almost two hours of a nearly three-hour play have gone by and the pace picks up, but the whole thing is directed and acted with the kind of forced energy that makes it all feel and sound as phony as a wooden nickel.

This farce first landed on Broadway in a production guided by George S. Kaufman, with Osgood Perkins (Tony’s dad) and Lee Tracy. It kept Prohibition-weary crowds in stitches for 276 performances. Three years later, it hit the screen with Pat O’Brien and Adolphe Menjou but never really caught fire until Howard Hawks refurbished it for Rosalind Russell and Cary Grant in His Girl Friday. In 1974 Billy Wilder dragged it out of mothballs for one of his least appealing and successful Jack Lemmon-Walter Matthau vehicles. Subsequent New York stage productions include a smash hit revival in 1969 with a sensational performance by Robert Ryan as Burns and a supporting cast headed by Helen Hayes, Dody Goodman and Peggy Cass. In the onstage clutter of the current production, which runs through January, you can spot such familiar faces as Robert Morse, John Goodman and Jefferson Mays. Holland Taylor is totally wasted as Hildy’s prospective mother-in-law, and so is Sherie Rene Scott as the accused cop killer’s trashy, gum-chewing girlfriend who throws herself from a window to divert attention. All she does is divert the audience’s attention from a room full of alleged reporters who don’t appear to know how to type a complete sentence. It must be reported that the audience laughed uproariously at even the tiredest old corn, so who am I to throw ice on their hysterics? Still, I insist that although I don’t know anyone who worked as a Chicago newspaperman in the 1920s, it is hard to believe they were as dishonest, infantile and irresponsible as the goon squad depicted here.

Evelyn Waugh, of all people, once described The Front Page as a barely intelligible story about newspaper life where neurotic men in shirtsleeves and eyeshades rushed from telephone to tape machine, insulting and betraying one another in surroundings of unredeemed squalor. The description still fits. 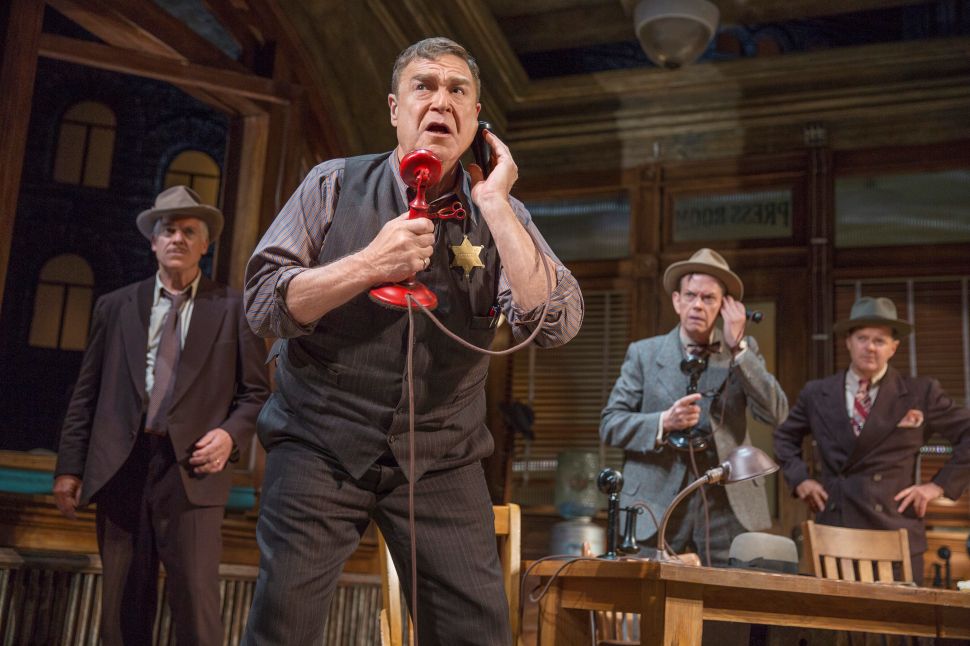