Well, we’re back in National City, and I’m here with you: Dana Schwartz, no alter ego necessary, doing your weekly recaps of the formerly-CBS-currently-CW superhero show about a clumsy girl who works at a vague media job just trying to balance an armful of lattes make her way in the big city when she also happens to be a Kryptonian alien with superpowers.

A brief recap for those of you just joining us—Kara Zor-El (Melissa Benoist, the adorable Marley from Glee) was sent in a pod from the planet Krypton as a young girl to watch over her far more famous infant cousin. Due to some space mumbo jumbo, her pod god delayed, and by the time she landed, she was 13 and that cousin was already the caped crusader.

She was adopted by the Danvers family (no relation to Marvel’s Carol Danvers aka Captain Marvel. This is a DC property) and now, all grown up, she’s working for Calissa Flockhart’s best imitation of Miranda Priestly at some sort of publishing company called CatCo alongside James Olsen (aka Jimmy Olsen, the boy with the camera at the Daily Planet who was always chasing Superman around). Her adoptive sister Alex works for the S.H.I.E.L.D.-equivalent D.E.O. (Department of Extra Normal Operations.) And up until now, we haven’t seen Superman. All caught up? Welcome to season two.

It’s Superman! The season two premiere delivered on the promise of Teen Wolf hunk Tyler Hoechlin as the caped crusader, and when I say delivered, I mean I’ll be replaying a gif of him winking over and over again, like, all night. Until my boyfriend says it becomes a problem.

Season one left off with a pseudo-cliffhanger: another pod from Krypton that landed containing an unconscious would-be alien. (I say pseudo-cliffhanger because producers have revealed the character to be Mon-El.) He stays unconscious this entire episode, because we’re focused on a different –El. Kal-El. Clark Kent. Handsome guy extraordinaire.

When Kara on a first date with Jimmy (of course. Women! Can they have it all? Things are always getting in the way!), an explosion on a commercial spaceship (think Elon Musk) forces her into her spandex. And who should be helping her guide the rocket down to safety but her cousin?

For family members who haven’t seen each other in years, whose home planet has been destroyed leaving them, to their knowledge, the only ones with the shared and lonely experience on planet Earth, they are very blasé in their greetings. “Hey, cuz!” “This looks like the job for the both of us!” Nothing like pithy bon mots to accurately represent the relief and emotion of rejoining with your family after indescribable loss and spiritual loneliness.

You have to wonder why the two of them haven’t worked together (or… you know, hung out) before this. The prologue of the show explains that Superman was the one who found Kara when her pod landed and gave her to the Danvers family to be adopted but after that… nothing? Not even Thanksgiving? Seems like cousins who were sent across the universe to protect each other would want to be there at their high school graduations or something. Besides, having two Super-people holding up a flaming rocket ship seems like, a lot easier. Weren’t there any other issues that could have been solved a little quicker with two pairs of ice/flame eyes and superstrengh?

That’s pet peeve #1. Why haven’t they hung out before?

Pet peeve #2: When Kara brings Superman to the cool new D.E.O. headquarters post-rocket rescue, why does she introduce him as Superman? Like, “Hi, this is my cousin Superman.” Isn’t his name Clark? He goes by Clark. People call him Clark. Superman is like his job title. Why bother to call him Superman to his face when you’re around people who all know his secret identity?

Pet peeve #3 is from the first season, but I wasn’t recapping this show back then so I have to say it now: why was Kara wearing fake glasses before she was a superhero with an alter ego. When the show begins, she was not planning on becoming a superhero. She just wanted to be a normal person. And yet she still wore glasses that she definitely didn’t need.

And then when she does become Supergirl, people get pretty close-up photos of her. What, she’s never worn her hair down to work before? I went to ComicCon and saw some friends of mine. They were in costumes and I still recognized them very easily. This is more of a sub-point and not a pet peeve because this might just be something that you need to accept about the Superman mythology or everything comes tumbling down. There is no good explanation for why “glasses” is a good enough disguise.

I could spend the rest of this recap going over pet peeves, but the thing is, I love this show. I love this goddam show so much. It belongs on the CW where it can be campy and silly and everything can be heavily foreshadowed and trope-y to its full potential. It doesn’t matter how on-the-nose the dialogue is most (all) the time. When the superhero music starts playing (or when Clark Kent winks) I full-on smile at my computer screen. I can’t help it.

Though things are going well for her as Supergirl, Kara is at a crossroads when it comes to her human life: she’s dating James but isn’t as excited about it as she wishes she was, and her boss, Cat Grant, has offered her the opportunity to pick exactly which role in the media company she wants to take on now that she’s no longer her personal assistant. (Cat doesn’t like her new assistant. Kara says give her a chance: “She went to Yale!” “So did George Bush.”)

Kara sheepishly suggests marketing because she read that it’s a job with a good work-life balance and is struck down by Cat: Kara needs to become someone in her “human” life that she’s as passionate about as her Supergirl side. That thesis is lit up in neon colors a few dozen times during the episode until they finally spell it out for us in explicit dialogue, while Kara is telling Jimmy that she just wants to be friends: “Last year was all about figuring out to be Supergirl, now it’s time I figure out how to be Kara.”

Turns out the rocket explosion was an assassination attempt on Lena Luthor, Lex’s sister. The big bad is in jail, but still has enough power and influence to hire a henchman, John Corben, to kill his sister before she changes the name of their company from Luthor Corp to the simple “L Corp” in an attempt at rebranding.

Sidenote: Why do villains always work in shadowy near-darkness? Corben was fiddling with his explodey laser drone in a room with the lights all off, a dramatic shadow cast across his face. Can’t make operating robotics easier.

Well, surprise, surprise, the Supercousins save the day after an explosive second assassination attempt at Luthor Corporation that left the building about to crumble: Superman held the building up while Supergirl repaired the base (a two-person job!) Corben is shot, but taken to a shadowy (!) underground facility where a sketchy scientist lady re-christens him as the villain Metallo.

Superman decides he’s going to stick around for a little while, because nothing is more important than family (aside from ignoring them for a decade or so), and after spending some time with her cousin and seeing how he seems to make things work as Clark Kent, Kara tells her boss that what she wants, more than anything is to become a reporter. “It’s about service, and telling the world the stories that need to be told,” she says.

A reporter, huh? Can’t wait to see the rest of the season that’s solely footage of Kara in a half-abounded newsroom at 8pm, lonely and desperately typing on a laptop dusted with Pirate’s Booty while Trump supporters tweet at her about being a MSM hack ruining the world. 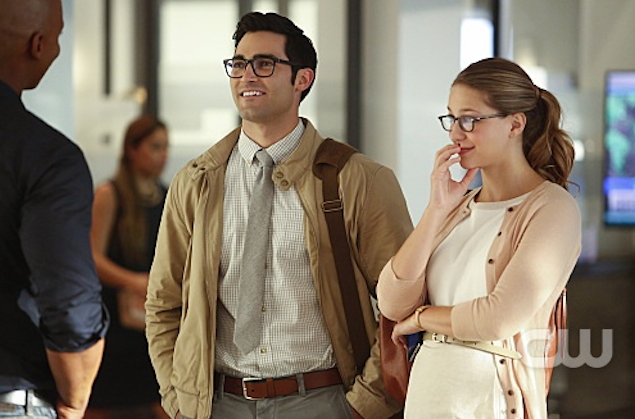