First things first, sorry for the delayed recap, BUT because the new episode doesn’t air until tonight, technically I’m in the clear.

The second episode of season two (and Supergirl’s transition to the CW) felt more like a premiere than last week’s (alright, aright, two weeks ago’s) re-introduction. A quick recap: Superman is in town, finally visiting the cousin he handed off to a strange human family before fucking off to Metropolis and never visiting.

As nice as Kara and Clark’s sweet texts and GChats have been over the past ten years, nothing compares to finally getting to fight crime together, and the Super Cousins are really really good at it. It’s almost as if dealing with giant fires and generic bad guys robbing banks is easier with two bullet-proof Superhumans. Weird they didn’t think of it before! The show’s explanation for Clark’s absence (Metropolis is far away) seems more than a little flimsy when both Clark and Kara can fly at the speed of light.

Metropolis being far away is also the keystone in the villainous scheme-of the-week. Cadmus (the shadowy organization with a vague, sci-fi name to replace lass season’s Myriad scheme), in their relentless scheme to get rid of aliens, have taken dudes and implanted them with kryptonite so they’d be able to kill Super Cousins.

But the human conflict of the episode is its real heart: Alex feels neglected by how close Kara feels to Clark (I’m making the executive decision right now to call Superman “Clark” instead of Kal or whatever. Clark. You’re Clark now.) It’s basically a feeling anyone whose best friend has ever had a new boyfriend knows too well: Kara inviting her cousin to sister night watching Veep? Come on. I know we all love Veep, but don’t infringe on the sanctity of a sister’s night.

Clark may be serving National City, but his relationship with the DEO and J’onn is still prickly because they keep kryptonite around especially when a shipment was stolen (as it turns out, to create those aforementioned Cadmus Metallo villains). Although, come on Clark. I get that this type of good-guy-against-good-guy creates some depth, but this one feels a little shoehorned when there are sometimes bad Kryptonians (cough cough, last season) that need to be taken down, and it wasn’t the DEO’s fault bad guys stole it!

Meanwhile, Kara, who recently decided she wants to be a reporter, is realizing it’s a lot harder than Cat Grant sending a magic email. Her new boss, Snapper Carr, is a TV movie’s stereotype of a salty reporter. He calls Kara “ponytail” (sassy!) and fires her on sight (less sassy!). I’m surprised they didn’t give him a fedora with a “press” card in it so the audience knows he’s an old-fashioned hardboiled reporter. Kara’s retreats to Cat for backup, and the response is less than comforting: deal with it yourself, and also, I’m leaving. (Noooo! Don’t go, Business Boss! I’ll miss you!)

So while “Deal with it yourself” might be how to handle a new boss, turns out the opposite is true when it comes to dealing with two giant kryptonite-infused meta-humans. For whatever reason, Cadmus thinks that the two superheroes they’ve seen fighting together for the past week or so won’t fight together, and can’t figure out a way that two people who can fly at the speed of light will possibly be able to deal with a threat in National City and Metropolis!

Well, teamwork makes the dream work. Alex deals with the mole instead the DEO who was smuggling the kryptonite out, and after the requisite “join us!” offer, goes to Kara’s side to help fight Metallo One while Clark and J’onn deal with Metallo Two. And, with the help of delightful fanboy Winn who made some anti-Kryptonite device for the Supercousins, they can defeat the Metallos and live to fight another day, even though Clark decides that, fun as this all has been, he’s headed back to Metropolis.

We can only hope that Tyler Hoechlin and his amazing cheekbones will be back soon. He’s objectively a better Superman than Broody McBroodyface Henry Cavill and I will fight anyone who disagrees with me. 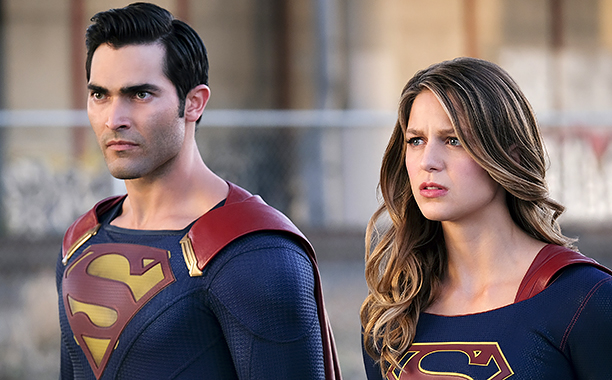