You say stunt casting, I say brilliant: Lynda Carter, the original Wonder Woman, is on Supergirl as a female president (modeled on one Hillary Clinton, I might add.)

It seems inevitable that Supergirl would introduce us to a female president. We have Cat Grant, and Alex Danvers, and Supergirl—all women in male-dominated fields (the media, secret agenthood, superherodom) who still manage to be feminine and badass in a way that, sure, sometimes seems one-dimensional and a little on-the-nose, but is overall appreciated.

I’m going to come back to Alex soon, our newly minted bisexual badass, but for now, let’s get into the plot of the episode: Mon-El, the stranger who landed on Earth in a Kryptonian pod escapes from the DEO (keeping that Kryptonite would have really come in handy, wouldn’t it) after running around for a while all shirtless and sweaty, with just a bit of five o’clock shadow. Do Kryptonians (okay, Daxonians—we find out Mon-El is actually from Krypton sister planet, Daxon) sweat? Do they grow facial hair? How to they cut their facial hair with normal earth tools? If you are a comic book nerd, please respond in the comments.

Mon-El’s home planet, Daxon, doesn’t have a good running relationship with Krypton. Daxonians see Kryptonians as snobby, holier-than-thou philosophers who probably correct your grammar and are total dicks about it, while Kryptonians see Daxon as a planet of unenlightened hillbillies. Wait, so is this episode with the first female president supposed to be a metaphor for the election or something?

The theme of the episode: confronting prejudice, is a little heavy-handed throughout all of the subplots. As excited as Kara is to meet Madam President, who’s in town to sign an alien amnesty initiative, granting all (*illegal?*) aliens full citizenship, Alex and J’onn have their doubts that the gesture is a mark of progress when they still see most aliens as trouble, and when most aliens aren’t able to acclimate as well as humanoid Kara and J’onn. (Side note: Of course you should get a blowout, Kara! I have never related to you more than in that moment.)

While on assignment as a reporter, Kara talks to Lena Luthor, adoptive sister of Lex, who discloses that her company is making an alien-detection device for people and business to buy so they’ll always know if there’s a non-earthling in their midst. Think of it like the Arizona stop-and-frisk-for-your-papers that existed a few years back. Kara is initially furiously against it, but needs to learn how to be impartial as a journalist. And then at the end of the episode when she learns… something, she comes around.

That lesson comes when the President is attacked by a fireball assassination attempt by someone with aim bad enough to miss like five times in a row but good enough to hit all of her secret service agents squarely on target. Kara immediately assumes it’s the escaped Daxomite and then has egg on her face when, low and behold, it’s some fiery flame alien instead.

Whereas the overall message of the episode feels like it should be good, the elements sort of flounder when they they’re examined individually.

The fire alien’s motivation to attack the president is because she thinks that alien amnesty is just a sneaky way to force the aliens to reveal themselves. Sure. But then why is she killing the president in a blatant act of totally visible alien violence, fully revealing herself?

If the “alien detector” is bad news, a metaphor for the snap judgements and easy discrimination that the episode warns against, why does Kara come around to it in a sweet heart-to-heart with Lena? How is that the lesson here?

And the final reveal—the president is an alien!—shown with flashing eyes in the shadow as she leaves the frame seems like it’s been done about a hundred times before on this show already. Besides, wasn’t the president’s message tolerance? If she’s secretly advocating for herself, her goodness is a little less good. Unless she’s Wonder Woman, keep it.

But the heart of this episode comes when it has fun and doesn’t get too bogged down in philosophy—like when we meet Alex’s new flirtatious hopefully-love-interest Maggie. Or when Lynda Carter says, “You ought to see my other jet,” and winks (she’s talking about the invisible jet, guys!!!!)

My other nitpicks (Mon-El is pretty funny and sassy for a guy wrongfully imprisoned who just found out his home is gone and everyone he’s ever known is dead, it’s adorable that this show has a newsroom in which reporters print their articles on paper) are just that: nitpicks. This show is fun. The details aren’t its strong suit. But usually it also does a bit better on the moral. 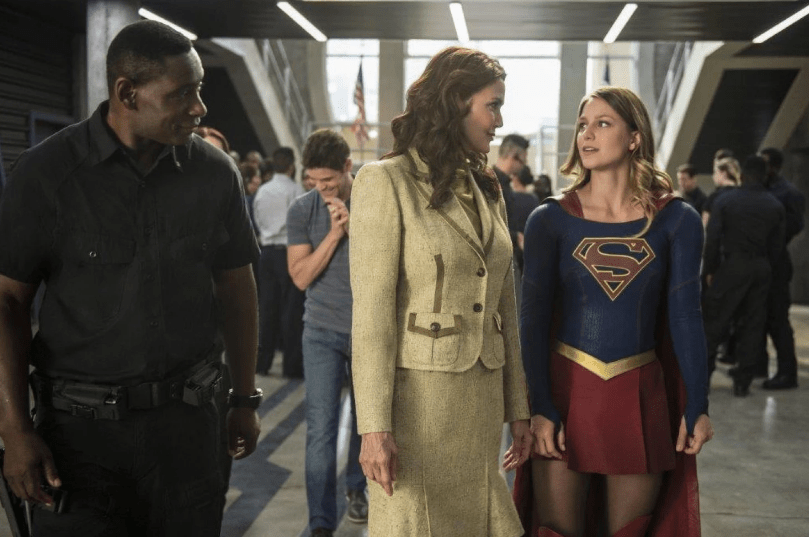