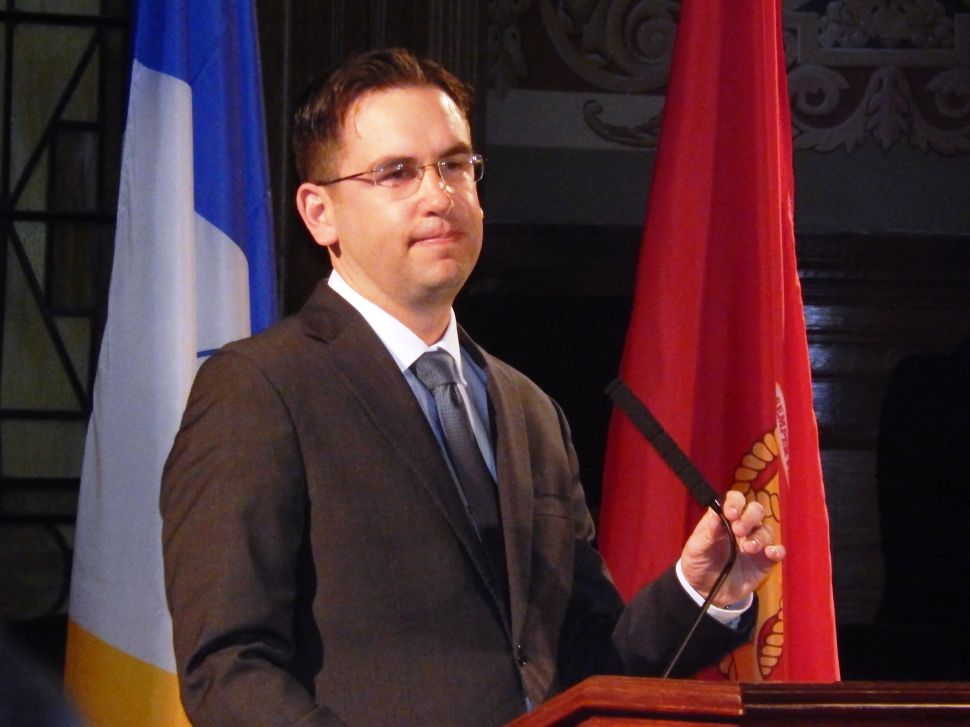 We don’t know why he got out of the gubernatorial race and endorsed Phil Murphy for governor, and we are candidly disappointed that he didn’t run, but we owe Steve Fulop a word of gratitude for the past 12 plus years in simple recognition of his willingness to get in the arena.

We have covered Fulop’s political career for ten years and over that period of time he consistently proved himself a tirelessly swashbuckling politician, who jumped into one fight after another, representing the best currents of our American political life by running at the local level, working his way up to become mayor of New Jersey’s most populous city and preparing to undertake a statewide run in 2017.

We look back with a lot of good feeling at those campaigns and elections Fulop made his own, from his Ward E races, to the school board elections, to his run for mayor – a great win in 2013, to his decision to back Newark mayoral candidate Ras Baraka, to his run for governor, which came to an end last week.

Did he make mistakes along the way?

Was he a misfit temperamentally at times?

But we have never believed a person must be an extroverted back slapper in order to be an effective politician.

First of all he has a great New Jersey story: the son of Jewish deli store owners who grew up in Edison, went to work on Wall Street, became a Marine and fought for his country in the Middle east after 911, then undertook a great adventure of a political career in one of the state’s most enduring and fascinating places: Jersey City. Maybe he wasn’t the most animated public personality, but he understood the delicate and important game of alliance-building across diverse communities: an irreplaceable skill one learns at that level of this enterprise. He did the hard work of putting together his own political machine, often in  defiance of set and complacent structures manned by people who had lost step with the changing face of his hometown and his home county.

He brought a level of sophistication and intellect to the game, always insisting on keeping his own counsel on the thorniest political questions of the day.

Say what you want about Fulop. He was too transactional perhaps, or too willing to change direction on critical issues, such as charter school education, for example. He was not personable enough maybe to a substantial number of people.

But he always had guts.

And in New Jersey politics in particular that’s a rare commodity.

His willingness to dive headlong into so many political fights probably more than anything came back to haunt him as he prepared for governor. If too many people in public life have no record of fights to point to, Fulop has so far left behind a scarred battlefield of head on collisions with everyone from Governor Chris Christie to Senator Bob Menendez to Senate President Steve Sweeney to South Jersey Democratic Party Boss George Norcross III.

He defined himself on those fights and they likely proved his undoing this go around.

His special political history makes his sudden endorsement of Goldman Sachs executive Phil Murphy that much more tough to absorb.

He’s never served a constituency who elected him and expected to hold him accountable for his public record.

We liked Fulop because he put together an epic run on the ground in the hard as hell demolition derby of New Jersey politics. Because in many ways he represented the state’s best chance of stopping another Jon Corzine exercise with a real story, his endorsement of Murphy impacts as that much more of a disappointment. It hurts, in fact, because it renews an old dreaded headline from the Star-Ledger about how Corzine – another self-funder with no experience in elected office when he ran for U.S. senate – was corrosive to the process.

We felt that Fulop, by coming up the hard way, earning it on the ground, represented something new. Again, that’s not to say he didn’t get impaired by his over willingness sometimes to indulge in some of the old methods.

In the history of our extraordinary state, Jersey City has never successfully fielded a gubernatorial candidate out of the mayor’s office, and that’s truly a shame, because those stereotypes of Hudson politics persist in spite of the fact that so much good derives from a place so culturally and ethnically diverse, a microcosm in so many ways of New Jersey, and consistent with a story we thought could have real resonance: the story of Steven Fulop.

So we don’t know how it will all turn out, and he’s intent on running for reelection locally next year, but we’re sorry to see him leave the guv contest.

He always managed to make things interesting, and offer an unpredictable blend of qualities that in the context of real character made so much else of what passes for public interest seem somewhat pedestrian and bland by comparison.

Thanks, Mayor Fulop, for being an interesting and authentic New Jerseyan, and for getting in there and mixing it up; so many people will suffer the mystery for the moment of why you departed the contest, and feel the sadness of a persistent contradiction, namely that our system supposedly requires the intervention of an outsider to make sense of what’s broken inside.

We liked the idea of someone who still had some of the outsider in him, and himself came to the dance from the financial industry, but who also held office, got in real-time political fracases, and as a matter of daily obligation must answer to the people.