Bridal Market in New York is a decidedly quieter series of events than its sibling, NYFW. Sure, the events may share a few venues like the Masonic Lodge, where Odylyne the Ceremony debuted (Creatures of the Wind put on a show there in February 2016), but overall there’s a different mood, mostly of reverence, at the bridal shows. Most times there’s actually a slower pace, as the models tend to stroll down the runway, rather than stomp. That feeling of refinery and elevation was no doubt underscored by this season’s presentations by Monique Lhuillier and Lela Rose.

This fall, Lela Rose celebrated a full decade of bridal collections. With a knack for hosting (she even wrote a book about it, Pret-a-Party) the Texan bought out The Pavilion restaurant in Union Square, set the tables with beet-pickled deviled eggs and fried oysters, and whipped up iced tea and cocktails. For the show itself, 12 looks slowly meandered through the tables, a take on today’s bridal classics. Each look featured pearls, a motif so integral to the brand that it not only appeared encrusted on the collar of a pantsuit, but as buttons, in clutches and as trimming in other looks. A high point? The easy-to-wear tea length, ribbon cut silk dress with an organza bodice and a cap sleeve. But with a host of stunners, including the open backed, boat neck silk faille gown and more, there were plenty of moments to remember.

Monique Lhuillier, on the other hand, has been doing bridal collections for twice as long as Rose and took her show to Carnegie Hall to celebrate. While canapés weren’t on hand, the live pianist, figure-eight shaped runway and all 23 looks certainly did the designer justice. The range itself skewed sexy, with visible lingerie, corset details as well as exposed backs. According to the designer, many of these dresses were just modern riffs on her own archival pieces. Quite a few options were of the off-white variation, most notably a beautiful, toffee colored long sleeve illusion gown bedecked with white flowers.

But it wasn’t just anniversaries that designers punched it up for; as with any fashion week, there were more than a handful of debuts. The big name came in the form of Viktor & Rolf who presented their Mariage line. The collection is the first “full” bridal collection from the couturiers, though they have used the Viktor & Rolf Mariage name on a capsule collection of wedding dresses in the past. Like both Rose and Lhuillier, the designers went back to what they knew: they referenced their couture work. The result came in the form of bows, as a main motif and focal point of the range. Considering their award winning fragrance by the name of Flowerbomb, one could easily assume that flowers would be a part of this range. And they were. One frock featured a simple, strapless bodice, full skirt and explosion of flowers at the waist, that trailed off into a long train. Or even the slightly more conceptual flower sculpture dress where a neat bow gives way to a full skirt of flowers. These over-the-top designs will certainly be a new world of wonder at the Mark Ingram Atelier, where the line will be carried in Midtown East.

The list of debuts doesn’t end there. Erin Cole, who has been designing bridal accessories in California, debuted her first  gown collection; PERSY, who offers gowns for less than $3,000, showed for the first time in the United States with an intimate presentation. Of those, Rime Arodaky stands out the most. Though her collection could have used editing, Arodaky’s U.S. debut showed promise. Already stocked on Net-A-Porter, the Parisian designer finds her strengths in separates and has made her name in “contemporary” bridal wear, meaning she steps away from the tulle-stuffed, full-skirted princess gowns of yesteryear, instead focusing on more streamlined silhouettes. The latest collection stayed true to that idea, playing lace and tulle opposite crepe (instead of the industry standards of silks and satins) for body-conscious silhouettes. In fact, the strongest pieces of the range could just as easily be worn off of the aisle as on it. 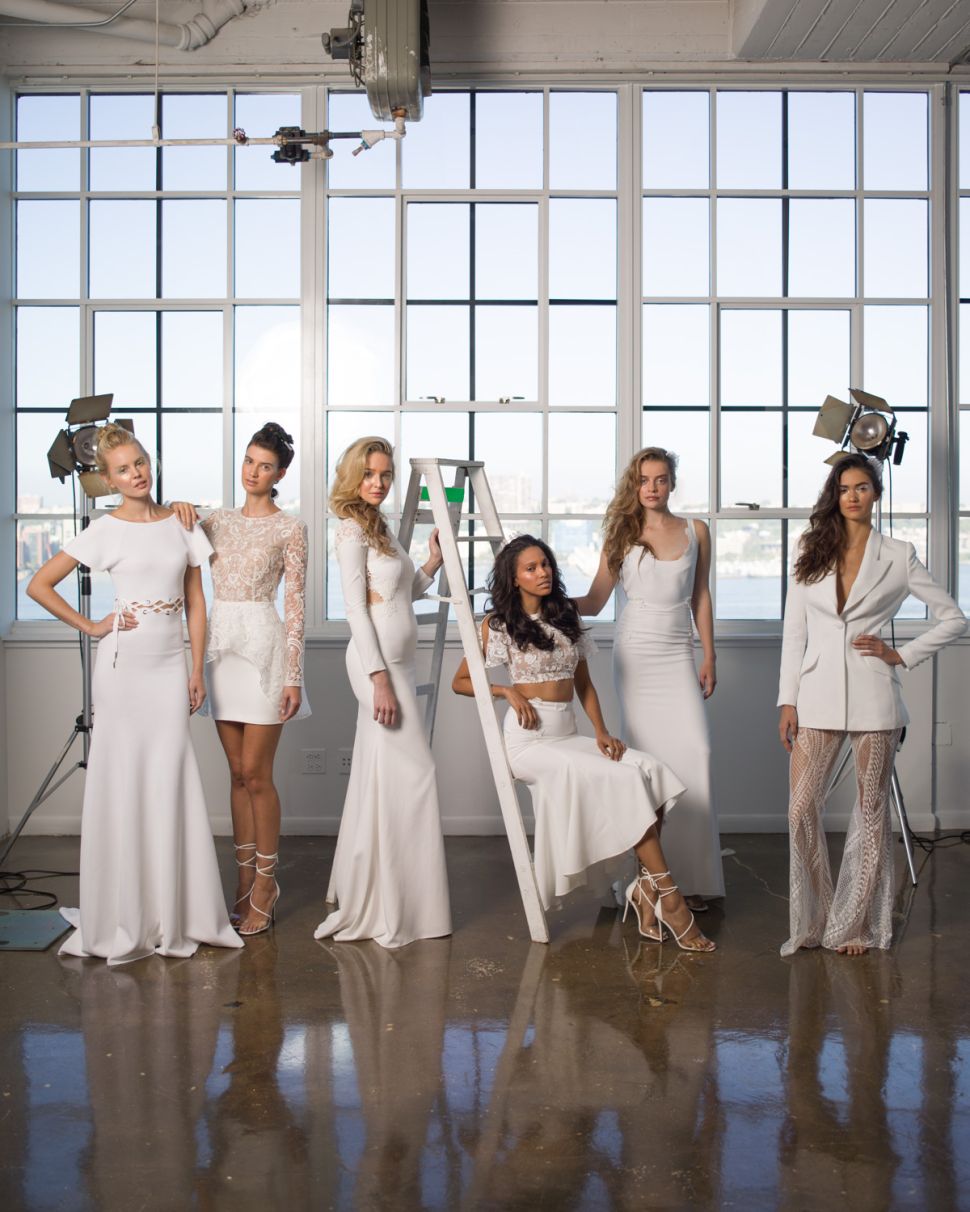