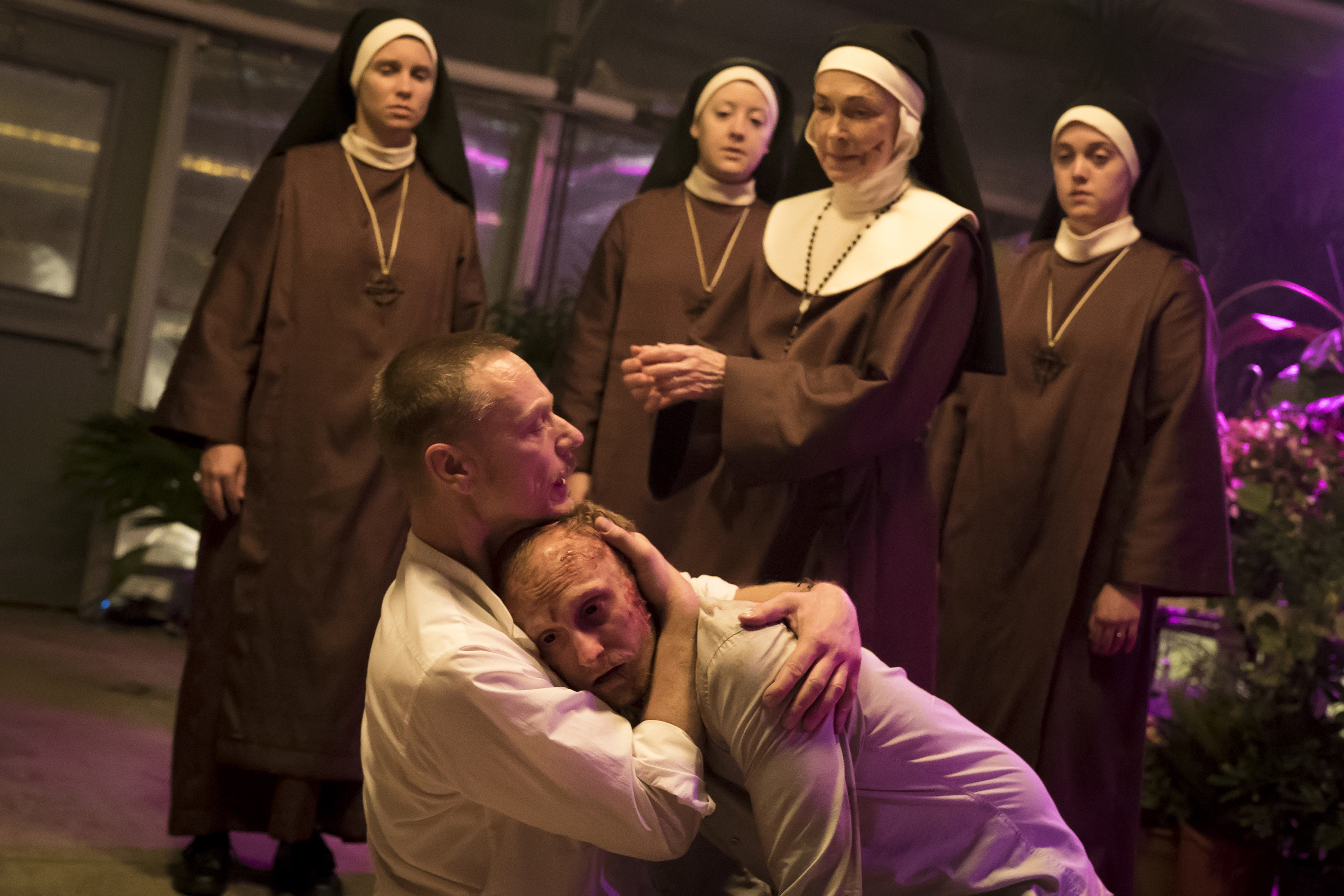 This week’s episode saw the show start to explore its own unique characters and situations, and in doing so, live up to its potential as the absurd nonsense show it’s been becoming. It’s not scary, but it is very entertaining and it’s clearly building up to some exciting things.

The episode begins in Casey’s head: Angela is perkily criticizing Casey while preparing a breakfast of bird fetuses. Her other family members are up and not fucking up or falling apart in some tragic way, to Casey’s shock and dismay. The Salesman shows up and Casey says that this wasn’t the deal she had in mind—he slaps her and tells her that she must “give in completely.” Back IRL, the Rances are in the hospital, with Casey being held there after having attacked the bro on the train at the end of last week’s episode.

Tomas shows up and breaks the news that the church won’t allow the exorcism. Sometimes if I go see a movie and see trailers for movies I hadn’t heard about, those trailers seem so generic yet preposterous as to feel fake, like trailers for a fictional movie that would only exist on Seinfeld or something. The expositional dialogue in this scene made me feel like I was watching a fake Exorcist TV show.

Angela yells at two doctors for not knowing what’s wrong with Casey yet. I think it drives me nuts on TV and in movies when characters yell at doctors for not doing their job in a way that meets their standards. It seems like such an unrelatable, crazy-entitled white person thing to do but it’s always treated as just part of the drama of the story rather than “this person is having a meltdown and thinks she knows better than actual doctors.”

Meanwhile, Marcus is running down his list of people who might know something about unsanctioned exorcisms. He starts at a nunnery, where the sisters are dealing with a possessed man. The head mother shows the demon gestures of love and the demon calms down. So if the hospital was running things the way the nunnery is, everything would be resolved with Casey. Can you imagine? “I need 60 CCs of human affection, stat!” “I’m going as fast as I can, dammit—I’m a miracle worker, not a doctor!”

Marcus wakes up on a bench at the nunnery, thus find himself getting closer and closer to turning into a full-blown Tom Waits character, like that hat he wears has always promised. The nuns kick him out.

A nurse treats Casey while the Salesman mutters evil shit to her. Again, we have to assume that Casey and The Salesman had a classic homework-loving teen and unkempt old man whirlwind romance at some point that went awry, but we don’t have any real information or detail about it.

Marcus’s next stop does make him a full Tom Waits character: he’s on a Chicago murder tour bus with a Hemingway allusion in its name. It’s like he’s playing Tom Waits bingo. This sequence is the closest the show has ever come to intentional levity, with the cosplaying tour guides bickering amongst themselves and repeatedly getting frustrated at interruptions.

Henry and Angela reminisce, and Henry tells Angela he’s on board if an exorcism needs to happen. Tomas goes to see sinister socialite Maria Walters to try and go over the Bishop’s head and talk to the Cardinal about an exorcism. Tomas’s goofball nephew Luis finds Maria’s dying husband and gets a-scared.

Marcus’s illicit pen pal Jessica comes to see him. It seems her husband has been sending emoji to another woman. Jessica sleeps over at Tomas’s, in another room.

Marcus talks to the paranormal experts from the murder tour, who seem like they’re in the top percentile of circus-themed poetry reading attendees. They seem like the type of people who would debate spending an entire paycheck on a shirt once owned by a murderous clown. These paranormal experts seem like they probably go to Burning Man, but the art they bring with them would depict skeletons sitting in a diner drinking black coffee and whiskey, because “life can’t just be sunshine and fucking rainbows, man.” These are some Amanda Palmer-ass paranormal experts. They seem to believe that all the violence in 2016 Chicago is symptomatic of demonic activity leading up to mass chaos, the likes of which have only been seen a few times in history. Hey, get these two a job working for Mike Pence, am I right? Folks?

At Tomas’s place, Jessica tries once again to get Tomas to give up that [banana emoji]. He curves her as always, but here’s the thing: Tomas doesn’t know it yet, but at this point Jessica’s got a pretty solid case. Her husband is up to no good, and you have a good man like Marcus excommunicated while the Church is probably compromised. The rules should go out the window and true love should win out. Isn’t that always the way with new relationships? You always find out too late that you could have made that first move earlier if you’d only known that minions are trying to summon the Pope to bring about a cataclysmic event! Angela texts Tomas a picture of Casey being held in the hospital. I think it would have been funny if Tomas texted an emoji back.

Marcus goes back to the nuns, and the head mother tells Marcus he needs to get over having accidentally let a child die during an exorcism the one time, and that he needs to take a more compassionate, feminine approach. I desperately wish this led to a montage of the nuns helping Marcus discover his feminine side, set to “Girls Just Wanna Have Fun,” but alas.

In the hospital, the Salesman starts strangling the nurse in Casey’s room, and Casey gives herself over fully to the demon in order to save the nurse’s life. Marcus and Tomas team up to do an unofficial exorcism on the now wholly-demonic Casey. Tomas and Marcus become the homoerotic bro pair we’ve all been wanting them to be, as Tomas remarks, “That’s quite a rosary” to Marcus and Marcus puts Tomas’s collar on for him.

This is the first episode not to end in a big twist, and everything that happens in it is fairly inevitable, just winding up for this big exorcism. Still, I think it’s my favorite yet—within the space of a single episode, the show goes from feeling very generic to finding more of a voice, thanks to emoji talk, a couple of “comical” side characters, and also, I think, just giving the main characters a chance to hang out with each other and not have too laboriously much to do. I’ll see you next week unless [red monster face emoji] [knife emoji] [scared face] [ambulance emoji]. 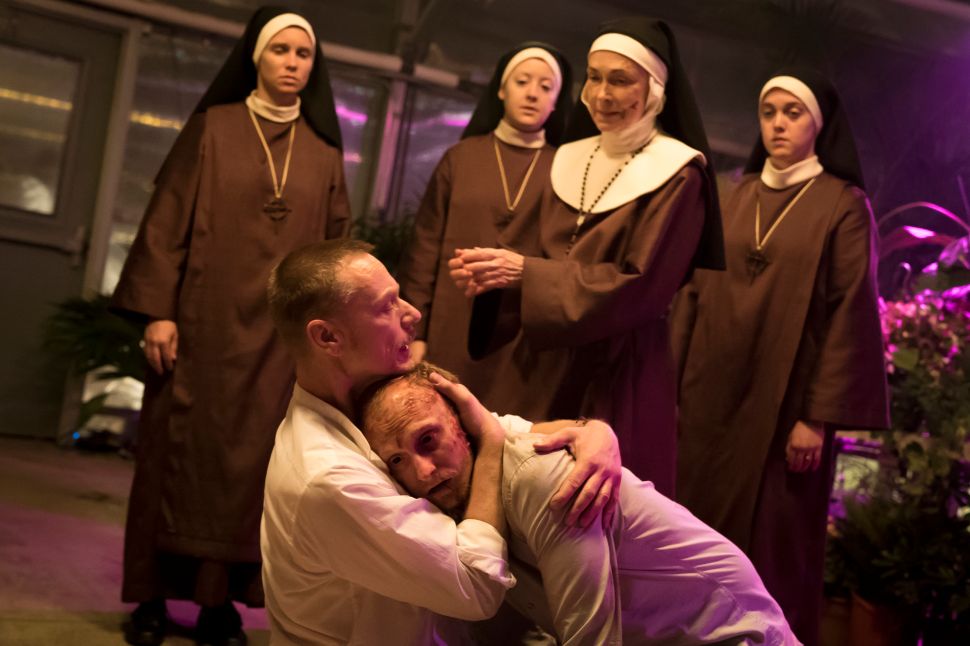